In the philosopher’s office 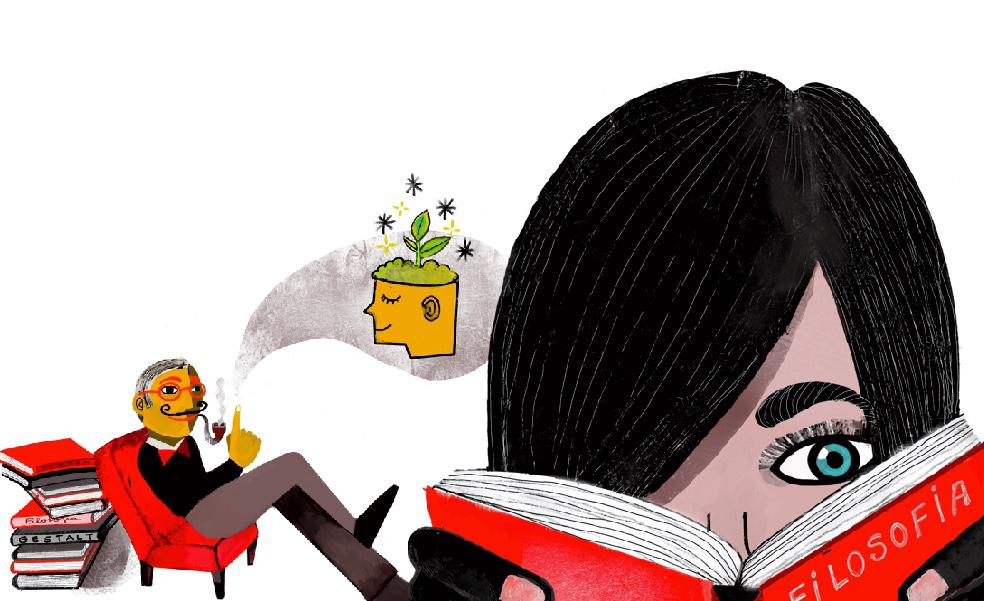 One of the meanings that the Royal Academy of the Language collects for the word philosophy is “strength or serenity of mind to withstand the vicissitudes of life.” That is, it could be used as a therapy to alleviate existential discomfort, as proposed in his doctoral thesis by the Granada-born philosopher Omar Linares, who for a few years has headed the cabinet of Philosophical Advice Thelos In short, “not always that we feel bad it is because we have a psychological problem, but life problems sometimes cause us discomfort because we do not know how to manage them.” That is where the figure of the philosophical consultant appears.

“It is something little known in Spain – he explains – an idea put into practice in Germany in the 80s of the last century but which has its roots in ancient Greece.” He points out that the boom occurred with the book ‘More Plato and Less Prozac’, by Canadian Lou Marinoff, a ‘best seller’ published in 1999 with the subtitle ‘How to apply philosophy to everyday problems’ which, in its first part , ‘The new uses of ancient wisdom’, presents this discipline as brimming with great therapeutic potential. The previous year, Marinoff had founded the American Philosophical Practitioners Association (APPA) to train philosophical advisers to help clients resolve their conflicts. In Spain they do not reach their thirties, including Linares: «Academically there has been a rejection of this type of practice, because there is the idea that you have to live for philosophy and not for it, and that the only thing you can do is teach it. But this is being overcome. In fourth year I had a quite ignorant teacher who spoke very much against us and that was what pushed me to investigate ».

Actually, Linares is not dedicated to citing the classical philosophers to his patients – better said consultants -, even though he has studied them: «To be a philosophical consultant you have to have a career, it is evident, although later I do not tell the person that I am faced with whether Descartes proposed this or that. In addition, I did my doctorate on this subject and I have been training for a long time. What I intend is to accompany the person so that they become aware of what they are experiencing. When we feel certain conflicts and we have the feeling that we should not be suffering but we cannot avoid it, we have to do a job of raising awareness to change the perspective, and we get there with questioning and dialogue ».

In the opinion of Soledad Hernández, of Philosophical ConsultationMuch of the bad reputation of this practice, the reluctance, comes from “some who have dedicated themselves to doing a kind of ‘coaching’ with it and have demoted it to a kind of ‘new age’ office selling smoke.” “This is not ‘spiritual’ fast food ‘, there are no simplistic recipes like’ 7 steps to happiness'”, Linares supports him.

Hernández clarifies that if you get depressed “because you have lost a loved one it is absolutely normal, or if you feel bad because you have left your job or have broken up with your partner. And you should not treat it in principle from the psychological point of view, but from the dialogue, because those feelings are normal, there is nothing pathological there.

There is no couch in Linares’s office, two chairs facing each other “because it’s about dialogue.” And in the first session, Hernández asks the consultant «what he wants to talk about. If you have something special, a theme. I ask you to ask a specific question, move from ideas to practice. Do not talk about abstract concepts, such as freedom or death, but about concrete issues. But sometimes it is not so easy to ask that question and we spend that first hour blurting out a lot of things, ideas linked in the wrong way. In the second session we already decided where we are going ». The price ranges between 50 and 70 euros per hour.

Marta and Félix are fictitious names for two real people who have received an online consultation with Linares. Both knew this figure of the philosophical consultant thanks to Marinoff’s book. Felix: «I read it back in 2008 and it seemed awful to me, a real pamphlet. It was later, when, in full depression, I started reading a philosophical essay, and I began to consider the idea.

– Had you been to the psychologist?

Felix: Yes, multiple times. Failure after failure. I am a 38-year-old gay boy, born in a town in Andalusia. I have suffered bullying and I have lived in a family with many problems. A life trying to escape from many things but with success: I got a good job, good friends, etc. But at the end of the road I was still extremely sad … tired already. Very affected. Psychologists offered me cryptic formulas, aseptic talks and in therapy it was very difficult for me to stop feeling ‘patient’. Because being the patient implies, implicitly or explicitly, a certain degree of obedience, recognition of the professional and subordination. I felt that communication with psychologists did not occur in a way that would help me in the medium or long term. So I abandoned them.

Martha: In my case, I went to the psychologist and psychiatrist. I had been depressed and anxious for quite some time as a result of my mother’s illness. He didn’t know how to deal with it. My mood was based on the day she had: if she had a good day, I was calm; if she was wrong, sadness took over me and I could barely make my life. There were days when all I did was stay in bed.

– How did you know you needed a philosophical consultant?

Felix: As an exercise in self-therapy, after reading a few classics of Western thought, I thought it would be good to start studying philosophy in earnest. It helped me. I found more questions than answers, and valid questions that helped me dismantle a world built around external assumptions and never questioned.

Martha: I was in a dead end situation and needed to try something new and different. The aforementioned specialists helped me in a certain way, but I couldn’t quite find what I was looking for.

Felix: I have struggled to get out of difficult situations. I have swallowed the recipe for ‘fight for your dreams’ when I didn’t even have dreams, because what I wanted was to live in peace. After years of precariousness, closets, emigration, emotional breakdowns, etc … I found myself in my thirties without knowing exactly what to do with my life, sad and completely exhausted. I had a job, a house, a marriage … but it was time to pay the happy toll.

– What did the consultant provide you?

Felix: It begins by eliminating those barriers that, a priori, appear in a philosophical consultation. The deal is already much closer, the sessions are focused on listening to our story in its entirety … The comfort and openness is enormous … A full-fledged out of the closet. And then the questions. Those questions right for life. Ask ourselves why we do things and if the reasons why we do things and suffer are sufficiently justified. The whole world breaks down for the better: the thousand and one ‘contracts’ that we sign with the society and culture that surrounds us; contracts in life fraud, from which we get very little. The fears that previously directed my actions began to fade, to lose their meaning. It was clear that, to get out of where I once had to, I had to make sacrifices. Philosophy does not take you out of the world, you have to live in it. However, managing day-to-day energies not so much to fears but to what makes you happy helps a lot to overcome anguish and depression.

– How many consultations did you need?

Felix: I was a year with biweekly consultations. We happen to see each other once a month. And now every two months. I have no intention of quitting.

Martha: It was a few months. At first every week and, as time passed, we spaced them out. We have finished but I know that I will be able to count on him whenever I need him.

– How did it help you to solve your conflicts?

Felix: Thanks to my conversations in the consultation I have been able to totally redirect my life. Not just solving the conflict … I have gone further and now I am making absolutely revolutionary decisions.

Martha: He was making me see things about myself that I was not able to see: situations that I faced in a way in which I was not comfortable, feelings that I did not even know I had about myself, my family and friends … It gave me the tools that allowed me to face my life in the best possible way and manage the bad times I was going through. And, surprisingly, it helped me realize that these tools were within me and within my reach. We did a very important self-knowledge job. Now I am a person with more confidence in myself, with a much more positive outlook on life, with the ability to face things that cause me pain, but without suffering. In short, it has made me happier.

Why do they seek philosophical help?

Soledad Hernández, from Consulta Filosófica, identifies the types of problems that push people to seek help in their consultation: «We have parents who come with their children between 5 and 10 years old because they ignore them or do things that are not considered ‘normal’, because they have an excessive fear of the dark, they pee on the bed … Then there are teenagers with identity problems and the definition of their person, lost kids who do not know what they like or what they are they are going to dedicate after the Selectivity, unmotivated, not wanting anything … As for adults, people arrive worried about the breakup of their partner, with problems of infidelity, either because they are being unfaithful or because they suffer from it. Also because they don’t like the job they have. Then there are older people, over 50 and 60, who think that they cannot make a radical change in their lives and that they should be content with what they have … Others come to us with psychological or psychiatric treatments and I put them as a condition to attend to them that they must continue with them, although with me they obtain a different help to face the problems … ».