In the kitchen or living room: a designer piece of furniture that cools, freezes and consumes little 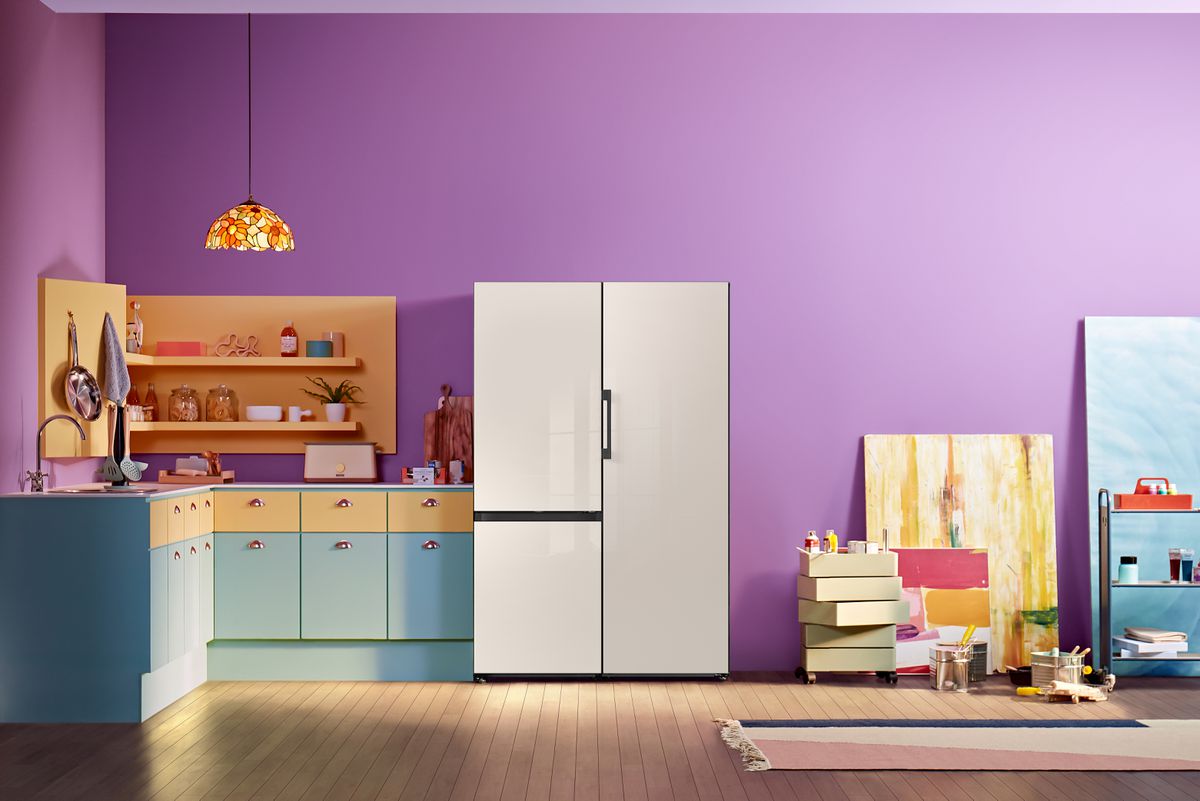 Toilet paper wasn’t the only thing that ran out during lockdown. Refrigerators also blew up in some countries. And the attention we pay to them has grown considerably. We open the door so many times that we pay attention to every detail and we even ask ourselves questions that did not exist before, such as why the egg tray can hold ten units, not six or twelve. Or why it protrudes two inches from the countertop. Or if the refrigerator could be bigger, smaller, flatter, more integrated or more decorative.

Samsung designers set out to give refrigerators the same design treatment that they have been giving televisions for years: creating a piece that can occupy the center of any room with aesthetic pride. A piece that can be tailored to each consumer, that allows harmonious games with the colors of its panels and that is not only a highly efficient functional appliance, but also a designer furniture destined to much more than just the position together. to the wall and last in line in the kitchen.

The covid-19 pandemic has radically changed our way of life. We spend more time than ever at home. For more than a year, homes have been studying, working, playing sports, cooking, holding small meetings … And, as a consequence of all this, rooms such as the kitchen – previously relocated to utilitarian spaces – have undergone a revolution. : they have become key places, true nerve centers where we spend a lot of time, where we cook, make bread, become pastry chefs, try new recipes, share, communicate, eat as a family and enjoy ourselves.

“The pandemic has rearranged our values, putting health first. And the place where this rearrangement of values ​​has been reflected is in the kitchen ”, points out the sociologist Alicia Aradill, expert in neurolinguistics and author of the book Telecommuting well (Ed. Diana 2020).

And with these new habits also come new approaches to space. Conventional barriers within the home are broken. The data is resounding. According to the study carried out by Ipsos Spain on Changing habits and technology during confinement, more than six out of 10 people confess to having changed their habits and routines in the kitchen during confinement. Of all of them, 79% reveal that during confinement they dedicated at least one more hour a day to the kitchen than they did before the arrival of the pandemic.

Metaphor of our vital change

Making pastry recipes, according to the Ipsos survey, has become the most frequent activity carried out in the kitchen during confinement. The search for information on new recipes and culinary tips and advice is on your heels. 55% acknowledge that they launched into more complex and sophisticated recipes, and exactly the same percentage confessed that they put on the apron to prepare dishes that they used to buy precooked. 47% admit that they made healthier recipes, prepared with fresh food.

“The kitchen has become the catalyst for the bonanzas brought by covid-19: prioritizing health, preserving it through diet, managing pandemic stress through diet slowlife, reflect our rearrangement of values ​​by rearranging spaces and uses and even beauty (through their redecoration). The kitchen has been recovered as a place of family cohesion, a secondary work space in which to enjoy short breaks in between and where to perform self-care and relaxation rituals ”, Alicia Aradill lists. “The kitchen has also been a space to reconnect with nature, which we could not visit, and to enjoy natural products (fruits, legumes and vegetables) through touch and smell. In a metaphorical way, we can affirm that we have not only cooked our food but also our lifestyle to live this situation and even overcome it from resilience ”, he says.

The kitchen has been recovered as a place of family cohesion, a secondary work space in which to enjoy short breaks and where to perform self-care and relaxation rituals

Alicia Aradill, expert in neurolinguistics and author of the book ‘Teleworking well’

As the time we spend in the kitchen has increased, the desire to make these spaces more functional and pleasant places has also grown, taking care of the details.

Because, in addition, many of the changes that the pandemic has brought will remain. This is confirmed by the survey conducted last December in the United States by Hunter, a leading consultancy in marketing and public relations for food and beverages. The highlights of their study: After nine months of the pandemic, the majority of respondents (54%) continued to cook more, and 35% admitted that they enjoyed cooking more than they had ever done before. And the most relevant: 51% expressed their firm intention to continue spending more time cooking. “The kitchen has become the catalyst for our wishes and desires for the future, which, due to its uncertainty and diffusion, requires a ‘more elaborate’ recipe,” says Aradill.

It’s called Bespoke and it’s the work of Samsung

In this context, Samsung has thought of a refrigerator designed to adapt to the lifestyle of each one, customizable to suit the tastes, styles and preferences of each consumer.

Bespoke allows everyone to design the refrigerator of their dreams, the one that best suits their needs. You can choose the size, its color and the finishing material, to create a kitchen according to the lifestyle of each one and their needs. It is a high-performance modular refrigerator that expands or contracts according to individual needs and has high capacity and sophisticated performance.

It has, for example, more interior space with the same exterior size, since the Korean firm has reduced the thickness of the walls, thus maximizing the capacity of the Bespoke refrigerators, which are available in the Samsung website and in The English Court. It also allows you to adapt your interior space to the taste of each one. And, of course, these are refrigerators that have the A label for maximum energy efficiency, which not only saves on electricity bills, but also helps to be more sustainable.

Because the refrigerator, without a doubt, has become the cornerstone of the kitchen since Marcel Audiffren, a French Cistercian monk with a knowledge of Physics, designed a contraption that worked with a crank to cool liquids (and specifically wines ), that he and his fellow friars drank, and that has gone down in history as the first refrigerator for the home.

In fact, in 1911 the first domestic refrigerators based on the design made by Marcel Audiffren began to be marketed in the United States, monstrosities that sold for a whopping $ 1,000 of those at the time (double what it cost at the time a car). Probably, that monk ahead of his time never imagined that one day they would be beautiful and intelligent.