In the interview: Söder names the reasons for the green crisis – “The green soaring has stopped” 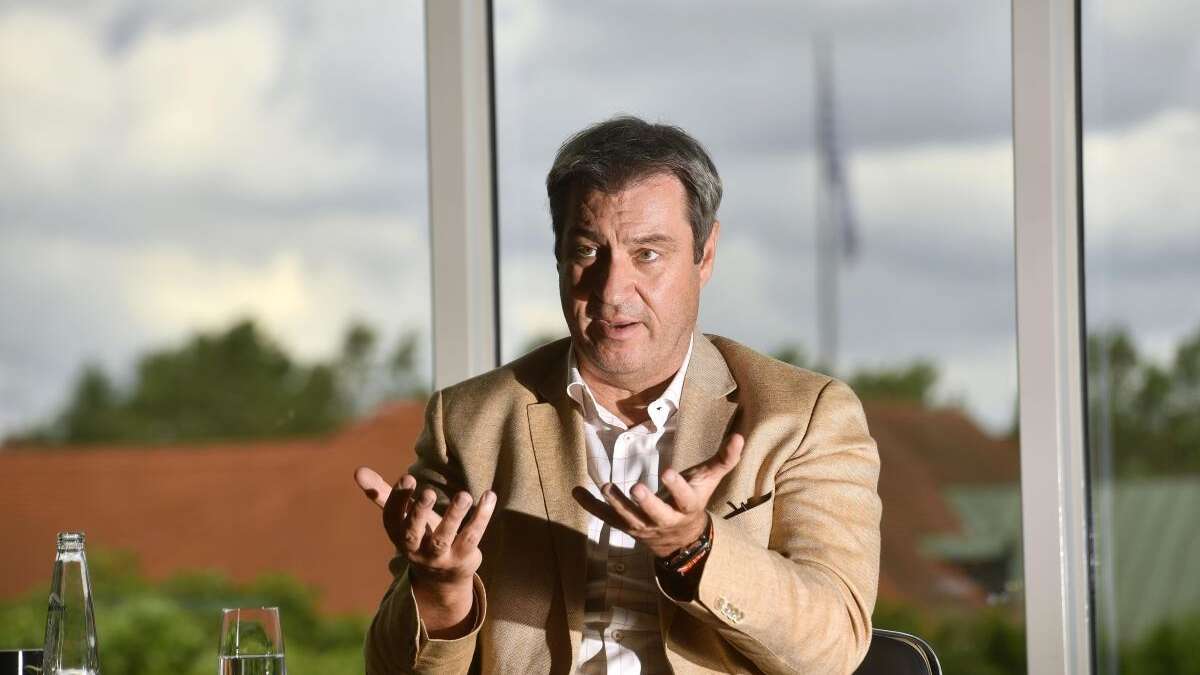 Markus Söder did not become a candidate for chancellor – now he is beating the drum for Armin Laschet. In an interview with Münchner Merkur, he explains the reasons why the green soaring is over.

Munich – On Saturday, the CSU in Nuremberg draws up its list for the federal election. In advance, Markus Söder * sets out the main features of his policy for the next few weeks – he is breaking new ground, especially in the fight against Corona. And he explains how he wants to win back the urban voters for the CSU *.

The CSU will draw up its list for Berlin tomorrow. How sad are you that it doesn’t say SÖDER above?

I made an offer because many advocates from all over Germany encouraged me to run. In the end, I accepted the decision. Everything has been cleared out and discussed. Armin Laschet and I have a very good human relationship. We will support him as much as we can.

So? You said in May that you had not won over Laschet’s candidacy. What has changed since then?

That is the past now. The sky brightens and the green soaring has stopped. There are three reasons for this: the good performance of our candidate for chancellor, the unity that we as the CSU bring, and the chain of mistakes made by the Greens. They are developing back into their old ideological role: speed limit, flight bans, petrol price increases. That’s not good for the Chancellery.

Do you print Laschet on posters? And do they hang up in Bavaria too?

Armin Laschet is posted, like all candidates for chancellor from Kohl to Merkel. Our top candidate, Alexander Dobrindt, of course. And at the popular request of the party, I’m also there on posters.

Markus Söder: “We have to become so strong that it cannot be governed without us”

How much does the Union have to fetch on September 26th?

We have to become so strong that it cannot be governed without us and that we can shape politics sovereignly and independently. In the end, a few votes should not be decisive for a shaky traffic light coalition or even a left-wing alliance.

The goal of 30 plus x means that you cannot rule against the Union. People don’t want that either. Germany is not ready for the Greens in the Chancellery – that would be an unsafe experiment for our country.

Your favorite Green Kretschmann said today: In a pandemic, the state would have to be able to take action much harder. Isn’t that your opinion?

No. Corona * does not nullify the Basic Law either. So far, we have done very well with our concept of weighing up each individual measure to determine what is efficient, necessary and justifiable. This also means that there must be new instruments in a conceivable fourth wave with the delta mutation.

That is our goal. We have now completely vaccinated a third of the people, at least half of them at least first vaccinated. We don’t have to resort to the classic emergency brake immediately when we climb, i.e. we automatically close shops and restaurants.

We are surprised: That from your mouth?

Why? It’s always about proportionality. The danger is now different: Delta will attack less the elderly and more pupils and students. We must therefore prepare the schools better. I asked the minister of education to present a concept for this in July. During the summer break, we should get the ventilation problem under control at every school.

The CSU has been saying that for months. In many municipalities, nothing happens. How long do you watch?

We have almost 100,000 classrooms and practice rooms, but the municipalities have only bought or ordered 14,000 filter systems. That is not enough. Equipping the schools, however, is not just a task of the Free State, but a community project. For me it is still completely incomprehensible why, for example, the state capital Munich rejects air filter systems for the classrooms. That would be an important contribution to reducing risks and receiving classroom instruction.

What are you planning specifically?

If that doesn’t work voluntarily, we need to consider an obligation to have an air filter in every classroom. We have to do everything we can not to end up in the same situation with distance learning in autumn. As a general rule, we must remain cautious despite the low incidences. It would be a mistake to blindly release everything now.

In May we had an incidence of 150. Today we are below 8. That is very good – but we shouldn’t risk this success in exuberance. We will enable further openings and gradually increase the number of viewers for culture and sport. But not all at once, as the FDP and, unfortunately, some of the coalition partners want. That’s why we still need a little patience when it comes to nightlife. The young target groups who are attacked by Delta and who have not yet been vaccinated go to the disco.

How do you intend to speed up vaccination?

More speed is important. To do this, the federal government must keep the commitments about the vaccine delivery. We will massively expand the vaccination options in the coming weeks: company vaccinations and vaccinations in the migration area. Especially for people who would not otherwise see a doctor or go to the vaccination center. Recently we even made a vaccination offer in a mosque in Nuremberg: we provided up to 600 vaccine doses for this.

The preliminary round is over. Interim balance: Have Munich and Bavaria traded massive risks of infection with the EM travel circus?

I think it went really well overall – even if the masks in the stadium were very tough at first. In the end, the cooperation with Uefa was fine.

What does that mean for the next Bundesliga season?

That spectators are also possible here. We are currently in talks on this.

In the stadium you were seen wearing a rainbow mask. You hoisted the rainbow flag in front of the State Chancellery. Do you swim on the wave?

It’s about attitude. The rainbow is a symbol of freedom and tolerance. I stand for a liberal and cosmopolitan Bavaria. Many did not understand Uefa why they blocked themselves so.

The CSU in the state parliament has followed the concerns of the state parliament office. There were also formal arguments for this. I decided differently for the State Chancellery. And I say very clearly: This flag also stands for my promise of protection as Prime Minister for all minorities and against the attack on our freedom and tolerance.

Oh: your CSU courted Orbán for so long!

If you look closely: I’ve always held back a lot. Unfortunately, Hungary is moving further and further away from our European values. Viktor Orbán is a tragic figure for me. The young Orbán was a fighter for freedom and democracy. The late Orbán is moving in a different direction. Anyone who gets involved with Salvini, AfD and other radicals is leaving the European bourgeois value base.

Markus Söder “Apparently the Greens want me in office longer”

Let’s talk about your party. CSU Vice Weber advised you to correct your course. Tenor: look after more regular voters instead of hugging trees. Do you heed the advice?

It would be a mistake to divide voters into two classes – good old and bad new. Unfortunately, a traditional CSU voter dies every ten minutes. However, Bavaria is a young country with an enormous influx. New citizens and first-time voters no longer come to us automatically. But we can get them excited about the CSU. We have to turn new Bavarians into regular voters. We don’t want a closed shop, but a modern and open people’s party. One lesson from Strauss: To be conservative means to be at the forefront of progress.

The unease was directed against the overemphasis on eco. A Söder always does everything 150 percent.

The CSU is always 150 percent! We do politics with full conviction and not half-heartedly. We will remain the People’s Party only as a broad-based party for a Bavaria of tomorrow. And as a reminder: There were phases when Strauss renewed the CSU in such a way that he was criticized as a “left-wing townsperson”. There has always been a tension between tradition and progress. We have to keep balancing it.

The election of the Federal President will only be discussed after the Bundestag election.

Is there any arrangement with the CDU?

At the beginning you said: Ten years Prime Minister, then it will be over. Is that still true?