In the era of Khalifa..a shift in the diversification of energy sources 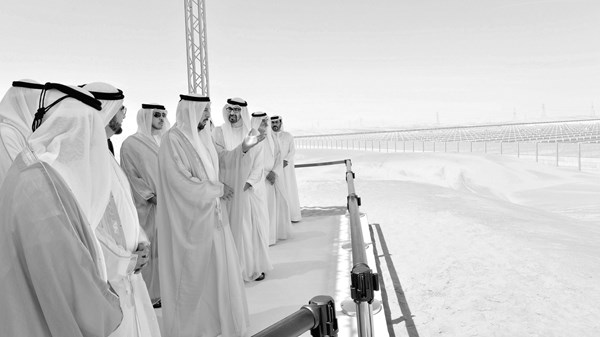 During the era of the late Sheikh Khalifa bin Zayed Al Nahyan, may God have mercy on him, the UAE achieved a comprehensive renaissance in the energy sector, with its success in providing a unique model in diversifying energy sources, to include in addition to oil and gas, renewable and nuclear energy.
During the era of the late him, the UAE succeeded in assuming a leading international position in the global energy sector, cemented by the country hosting the headquarters of the International Renewable Energy Agency “IRENA” in 2009, in addition to the country’s winning last year to host the United Nations Climate Conference “COP 28” to be organized in the year next.
The energy sector played an important role in the renaissance that the UAE witnessed, as the country, since the discovery of oil and gas more than half a century ago, has become a major player in global energy markets, in light of its prominent role in stabilizing global oil markets.

oil discoveries
During the era of the late Sheikh Khalifa bin Zayed Al Nahyan, may God have mercy on him, new oil discoveries were announced, making the UAE an element of stability in the global oil market, with the consolidation of its position as a reliable global supplier of energy.
ADNOC’s board of directors meeting at the end of last year witnessed a significant increase in the reserves of the UAE, including 4 billion barrels of oil and 16 trillion standard cubic feet of natural gas, bringing the UAE’s national reserves of hydrocarbon resources to 111 billion barrels of oil equivalent and 289 trillion feet. One standard cube of natural gas, which enhances the country’s position in sixth place globally in the list of countries with the highest oil reserves, and seventh in the list of countries with the largest natural gas reserves, and contributes to consolidating its position as a reliable global energy supplier.
And the year 2020 witnessed the announcement of discoveries and increases in oil and gas reserves in the Emirate of Abu Dhabi, estimated at 7 billion barrels of crude oil, and 58 trillion standard cubic feet of conventional gas.
The year 2020 also witnessed the announcement of the discovery of a new reservoir of natural gas in the region between Seih Al Sedira – Abu Dhabi and Jebel Ali – Dubai, with a huge stockpile estimated at 80 trillion cubic feet, as part of the joint project called “Jebel Ali Project”, as well as the announcement of the Corporation Sharjah National Oil “SNOC”, announced the discovery of a new field of natural gas and condensate in the emirate called “Mahani” with flow rates of up to 50 million standard cubic feet per day, which contributed to strengthening the position of the UAE in the field of natural gas.

Barakah stations
Since its launch in 2008, the UAE Peaceful Nuclear Energy Program has witnessed major historical and strategic achievements that made the UAE the first in the Arab world to have a multi-station peaceful nuclear energy project in operation, and consolidate its global leadership position in terms of its distinguished efforts in facing the phenomenon of climate change in preparation for reaching to climate neutrality by 2050.
Since its establishment by a decree issued by the late Sheikh Khalifa bin Zayed Al Nahyan, may God have mercy on him, in December 2009, the Emirates Nuclear Energy Corporation has been keen to implement the directives of the rational leadership to develop a peaceful nuclear energy program in accordance with local regulatory requirements and the highest international standards of safety, security, quality and transparency.
When fully operational, the four Barakah plants will provide up to 25% of the UAE’s electric power needs, and will reduce 22.4 million tons of carbon emissions annually, which is equivalent to emissions from 4.8 million cars each year.

launch “Masdar”
The launch of the “Masdar” initiative, during the era of the late Sheikh Khalifa bin Zayed Al Nahyan, may God have mercy on him, represented a qualitative transfer in the march of the energy sector in the UAE, with the start of an important stage in the history of diversifying the country’s energy sources, with the expansion of the field of renewable energy.
Since its establishment in 2006, Masdar has represented a living model and a major contributor to reducing the effects of climate change and greenhouse gas emissions. Masdar is currently investing in sustainable projects with a total value of more than $20 billion. These investments include the successful marketing of new technologies that contribute In support of achieving the sustainability goals of the UAE and the world.
The company witnessed a noticeable increase in the production capacity of its portfolio of clean energy projects in 2021, as the company’s annual sustainability report last year showed an increase in the electricity generation capacity of all projects in which Masdar has invested – whether existing or under development – from 10.7 GW to more than 15 GW In 2021, these projects collectively contributed to avoiding the release of about 7.5 million tons of carbon dioxide last year, an increase of 40% compared to 2020.
Masdar has taken rapid steps during its 16-year career, and the company has strengthened its projects and commercial activities within the framework of its long-term strategy that aims to ensure a sustainable future, support the economic and social development goals of the UAE and continue the march of achievements, reflecting the aspirations of the state and in line with ” The “Fifty Principles” approved by the wise leadership, to form a road map for all federal and local institutions and authorities to achieve the best, thus contributing to supporting the comprehensive renaissance witnessed by the state.
Masdar recently established its position as a global leader in the clean energy sector, through a strategic agreement between ADNOC, TAQA and Mubadala to each own a stake in Masdar, with the aim of developing a global investment portfolio in the field of renewable energy and green hydrogen. Thus, Masdar will become one of the largest companies of its kind in the world, as the company looks to double its production capacity by 2030 to contribute to strengthening the UAE’s efforts to keep pace with the transformation in the energy sector by enhancing capabilities in the field of clean energy and reducing carbon emissions locally and globally. and accelerating the achievement of climate neutrality by 2050.

Zayed Sustainability Prize
The year 2008 also witnessed the establishment of the Zayed Sustainability Prize in honor of the vision of the founding father, the late Sheikh Zayed bin Sultan Al Nahyan, “may God rest his soul”, who laid the foundations for sustainable development and environmental protection in the UAE, where the award has become a global leader in stimulating creativity and innovation and encouraging Clean energy innovators.
The Zayed Sustainability Prize revealed the contribution of innovative projects submitted by previous winners since 2008, directly or indirectly, to making a positive impact on the lives of more than 370 million people in 150 countries.
The total value of the prize is $3 million, distributed over the five categories, where the prize value for each category is $600,000. The Global High Schools category prize is distributed to the six winning schools from the six regions around the world, and each winning school gets $100,000.
The Zayed Sustainability Prize honors small and medium-sized companies, non-profit organizations and high schools that provide sustainable solutions that have the potential for innovation, impact and inspiring ideas.
The Zayed Sustainability Prize has played an active role in promoting access to clean energy in remote communities, through the “Post 2020” initiative led by the UAE, which was launched by the award in partnership with a number of prominent partners from the UAE and the world.

Hosting “IRENA”
The UAE’s success in hosting the headquarters of the International Renewable Energy Agency (IRENA) in 2009 was an international appreciation for the UAE’s efforts in renewable energy, and its pioneering role in spreading sustainability solutions around the world, an appreciation that increased with the UAE’s expansion in implementing a number of clean energy projects around the world. world, and intensified its efforts in spreading clean energy solutions around the world.
The International Renewable Energy Agency (IRENA) is a leading government agency spearheading the transformation of the global energy system and supporting countries in the transition to a sustainable energy future.
The agency is considered a global hub, a major platform for international cooperation, and a forum for leaders in policy, technology, resources and financial knowledge specialized in the field of renewable energy. The Agency has 167 members (166 countries in addition to the European Union), and more than 17 additional countries are seeking to join it, and it works to encourage the adoption and use of all forms of renewable energy in the context of its continuous endeavor to achieve sustainable development, enhance access to energy, and achieve energy security. energy, and drive low-carbon economic growth to reach a prosperous future.

Sustainability Week and ADPC
During the era of the late Sheikh Khalifa bin Zayed Al Nahyan, may God have mercy on him, the first session of the Abu Dhabi Sustainability Week was launched, which witnessed a great development to become one of the largest gatherings concerned with sustainability in the world and a global platform, contributing to stimulating efforts to accelerate the pace of sustainable development.
The week includes a range of prominent global events and initiatives, including the General Assembly of the International Renewable Energy Agency (IRENA), the Atlantic Council’s Global Energy Forum, the Forums and Exhibition of the World Future Energy Summit, the Abu Dhabi Sustainable Finance Forum, and the Zayed Sustainability Prize Distribution Ceremony.
Although the first session of the Abu Dhabi International Petroleum Exhibition and Conference “ADIPEC” was launched in 1984, since 2013, ADIPEC has turned into an annual event, instead of organizing it every two years in its previous sessions, due to the growth of the oil and gas sector in the region, and the development of the exhibition To become one of the most important global events for the oil and gas sector.

F1 | Binotto: "Sainz? Maybe he paid for the mistake in qualifying"

The 1×1 of the Barça players against Celta de Vigo