In the cuddle course in the Chancellery: Söder and Laschet find a new division of labor – critics suspect sham 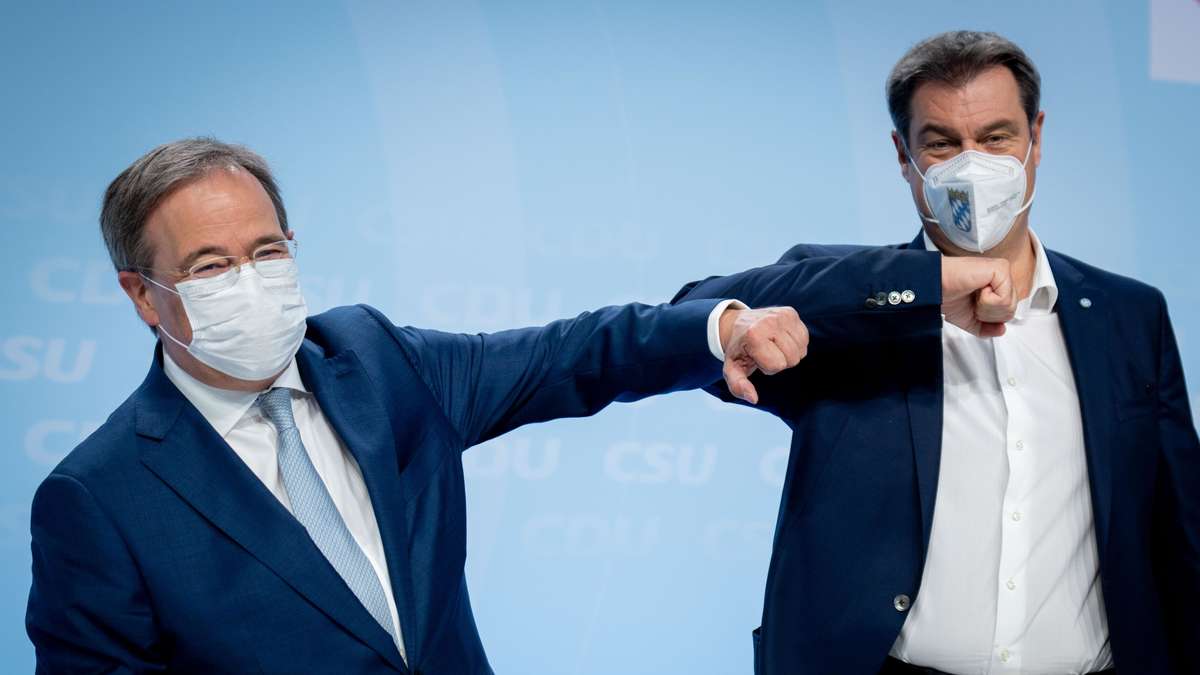 Gone are the days of teasing? When presenting their 140-page election program, Armin Laschet and Markus Söder are closed. In terms of content, a lot remains vague.

Munich – Markus Söder is almost through with his speech when he still has to confess something. “Of course there were ten days when there was an exciting situation between us,” he says and turns over to Armin Laschet. Then he speaks of “one or the other disappointment” and it is not clear whether the CSU boss means his chancellor plans fizzled out or Laschet’s disappointment with the taunts from Munich. In any case, everything has now been cleared up. “There is no grudge.”

Until recently, Söder found it difficult to accept his defeat in the race for the candidacy for chancellor for the federal election in 2021. Praise for Laschet hardly crossed his lips, which fueled doubts about Bayern’s team will. But the Union cannot allow itself to fight in the election campaign, which is why Söder tried to make a clear commitment on Monday. Laschet’s “very good performance” is one reason for the rising poll numbers. “We’ll rock it together.”

Laschet and Söder: Ex-opponents have found a kind of division of labor

Resentment or not – if you take yesterday’s appearance in Berlin as a foil for the next few weeks, then the two ex-opponents seem to have found a kind of division of labor. Laschet is statesmanlike when presenting the electoral program, showing the broad lines which, in practical terms, mean that the details do not have to be too specific. Söder creates friction: “The Germans don’t trust the Greens to take over the Chancellery,” he says, adding: “You can also do green politics without the Greens.”

In fact, climate protection takes up some space on the 140-page election program. The aim is to make Germany a “climate-neutral industrial country”, says Laschet and speaks of a “triad of climate protection, economic strength and social security”. Overall, he calls for a “decade of modernization” for the country. The pandemic showed what was possible in the shortest possible time. “Doesn’t work, doesn’t exist in Germany anymore.”

On Sunday he and Söder tinkered with the joint program, some things were trimmed at the last second. The generational pension, for example, in which the state pays a fixed monthly amount into a fund for each child, remains an idea in the program. The original amount of 100 euros per month is missing, however. Ultimately, everything is subject to a financing reservation. After the election you want to make a cash fall, says Söder, and then see what is possible.

Election program of the CDU and CSU: competition suspects sham

The competition suspects a sham and accuses the Union, in addition to a lack of sharpness of detail, above all, of not having thought through the financing of the projects. Laschet and Söder oppose this. Unlike the Greens, the SPD and the Left, they reject tax increases even for high earners – instead, a “comprehensive unleashing package” is intended to stimulate the economy and in the medium term to flush more money into the tax coffers. This will then be used to finance the projects of the program.

Especially the Greens and the SPD are skeptical. SPD General Lars Klingbeil accuses the Union of “social coldness”. You have presented a program in which “the champagne corks pop on the boardroom”. The Green Chancellor candidate Annalena Baerbock thinks the program is “unhappy” and “unsocial”. Instead of tackling major reform projects, for example in the area of ​​climate protection, the Union wants to “continue as before – according to the motto: Close your eyes and go through”.

The two Union men, however, do not let themselves be disturbed on their new cuddle course. Even the fact that the CSU election campaign hit Mütterrente did not make it into the program, Söder swallows down with some confidence. It will be part of the “Bayernplan”, which – the Bavarian expressly asserts – is not intended to “run counter to the joint program”.

The new unity is only tarnished once. When a journalist asks Laschet whether he knows how much a liter of diesel costs, he skids. “1.33 euros”, he says before Söder corrects him briskly: The price is 1.25 euros, he says. The presented is silent.

The Union delivered 140 pages of the election program – with a few question marks and a lot of “security”. Söder and Laschet’s calculation could work out, comments Florian Naumann.