In space … running a rover and missions further to the moon and beyond! 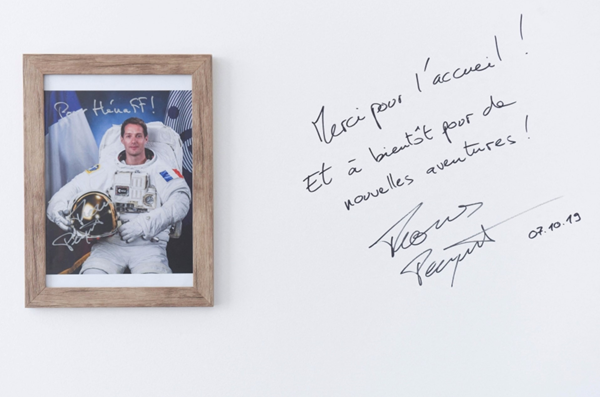 French astronaut Thomas Pisquet is preparing to conduct dozens of experiments on the International Space Station, including monitoring harmful radiation, operating a roving vehicle from a distance, improving sleep and caring for the body, in preparation for missions further to the moon and beyond.
“We’re working on exploration techniques,” said Remy Canton, in charge of the unit in charge of twelve new experiments at the National Center for Space Studies.
These experiences are of great importance in light of the enormous challenges that come from sending a manned mission to the moon or perhaps launching such space missions one day to Mars.
The first of these challenges is protection from the avalanche of particles from solar storms and galactic cosmic rays that seriously harm the health of astronauts and their equipment.
The inhabitants of the Earth, and to a lesser extent the residents of the International Space Station, are protected by a “shield” in the Earth’s magnet field.
But moving further away exposes humans to real radiation in the form of streams of strongly charged particles. “It is a very big problem in terms of space exploration,” says Remy Canton, as “you should not receive a lethal dose (of these radiation) before you set foot on the surface of Mars or because of a long stay on the moon.”
Before considering protection from these radiation, it must be measured more precisely, and perhaps anticipated if possible. This is the subject of Lumina’s experiment with advanced technology that utilizes the characteristics of a fiber-optic network with phosphorous stimulation.
“When we send out the radiation, the color becomes dark very quickly,” says Sylvain Girard, a researcher at the laboratory of Ober Corian and coordinator of the experiment being conducted in cooperation with “Ex-Blue” and the European Center for Nuclear Research. It then “suffices” to measure how dark the color has become by comparing the intensity of the light signal directed to one side with that received by the other, to extract the transmitted radiation dose.

This mechanism would allow real-time measurement, according to Girard, with a sufficient degree of sensitivity to monitor any sudden change in the transmitted dose, which for example predicts a solar storm.
These unexpected storms push the streams of high-energy charged particles and cause severe damage. “Like a wave, it takes an hour to ascend before reaching the maximum flow level,” explains Nicola Ballon, an engineer specializing in the radiation environment at the National Center for Space Studies.
And in any distant space mission, “if we notice a sudden increase,” “the astronaut who is outside can be returned or sheltered in bunkers or vests with vital materials that reduce the impact of some radiation,” according to the engineer.
The experiment will also examine how an astronaut can “use the information available to him that is related to touch and vision” to improve the perception of future command centers.
And Toma Pisquet will wear a virtual reality helmet attached to a mechanism that allows the return to push the hands “because manual dexterity and fine motor skills decline greatly in areas of zero gravity, as we stop feeling the weight of the arms and the force exerted by the person”.

In particular, he will have to practice using a robotic arm on a mission to catch a virtual vehicle.
This helmet will also be available in the “Emercive Exercise” experiment, in which the astronaut enters a virtual environment attractively when he drives a “SeaS” training bike that the astronauts use daily to reduce the muscle wear and tear that accompanies all flights in areas of zero gravity. Thomas Pescet, on his part, requested that he tour Paris by bike for this purpose.
Then, the “Dreams” experiment will be conducted, which is based on recording the stages of sleep “to understand how isolation and microgravity affect its quality,” according to Canton.
This issue is of great importance on the International Space Station, where the day and night phases follow within 45 minutes, and for long-term missions on the moon or towards Mars.