In search of the next Ansu Fati 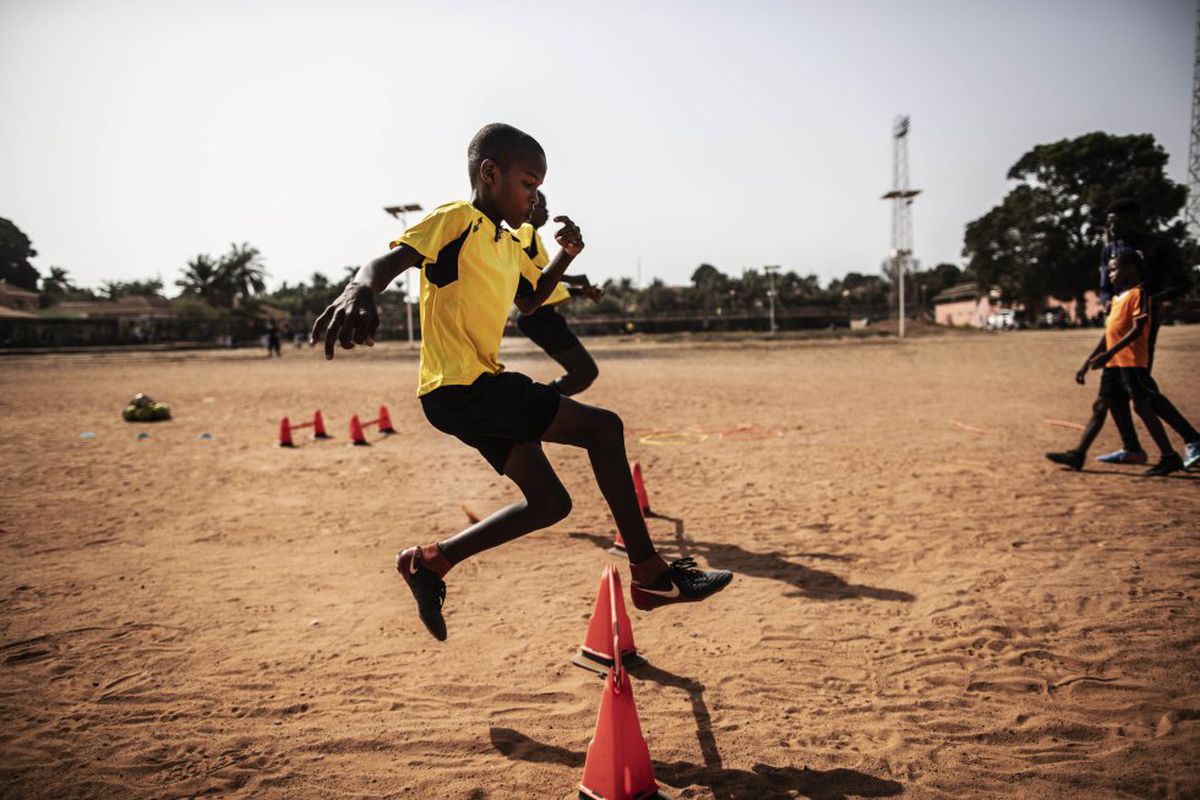 It’s three in the afternoon in the neighborhood where the Portuguese settlers once lived in Bissau. On an embankment of fine earth, like that of a paradise beach, but reddish in color, a hundred boys and girls train their skills with the ball. It is very hot and at times they take shelter under the shade provided by the wall that flanks the enclosure. The infernal temperature and the instability of the terrain are not the only adversities. Many do not wear shoes suitable for the sport, some wear flip flops with socks and others go barefoot. But they play, laugh, have fun. The alternative would be the street.

PHOTO GALLERY: A field for street children in Guinea Bissau

Real Madrid jerseys abound. All the girls wear white with Isco, Modric, Ronaldo and other club merengue players on their backs. Before the camera, they stop dodging cones with the ball, laugh and pose as models. The stamp makes one suspect that the Spanish team sponsors this particular soccer school for street kids. It is not like this. Across the field, where a tree provides generous shade, a radial sparks fly, workers cut and weld metal. They are building goals. Its sale is what sustains the initiative that Causo Seidi launched six months ago.

“I started like these children, on the street, without shoes, with nothing,” he explains in English, a language he learned in the decade he lived in England. Causo Seidi was born 50 years ago in the north of Guinea Bissau, to a very poor family in a small village called Birbam. Child poverty is widespread. According to the Unicef ​​Multidimensional Poverty Index, 75% of those under 18 years of age suffer more than three serious deprivations such as not having access to sanitation or a house with a roof and paved floor. More than 77% with less than 14 were victims of family violence and child labor.

At 15, Seidi moved to the capital. He alternated school with informal jobs and soccer. “I tried hard, but I didn’t reach the highest level,” he explains. However, he trained as a coach. When he collected enough money, he moved to Lisbon “to have a better life.” And he did it, he smiles. Between 2002 and 2018 he lived in England, and for seasons in other countries, wherever his job as a coach took him: Serbia, Egypt … And he returned home. “I thought I had to go back to my country and apply what I had learned to have football here.” His dream is to find the next Ansu Fati, the FC Barcelona player born in the African country. Seidi turns on the mobile and shows a photo with his idol. “I was in Barcelona with him.” And pass the gallery of images.

According to the Unicef ​​Multidimensional Poverty Index, 75% of those under 18 years of age suffer more than three serious deprivations such as not having access to sanitation or a house with a roof and paved floor

Alberto Ndi, 14, is her hope. “Play for the U15, the national team,” said the proud coach. “I used to play on a narrow street until three months ago when they offered me to come here and I accepted,” the boy explains shyly. “I want to be like Messi.” Seidi makes a funny face. “I’m a big fan of Real Madrid and it leaves me from Barcelona,” he laughs.

Like Ndi, a hundred boys attend his training sessions every day. Free. “Their families have nothing, not even to buy their equipment. So I provide them with what they need, I also help them to continue in school, with food, with health, ”says Seidi. The project, which started half a year ago, is covered by half of the profits from the goals, which it sells at the moment only in Guinea Bissau, although it plans to expand its business to other countries in the region. He also plans to expand his project to rural areas of the country. “Talent can be anywhere,” he reasons. It has a quarry: almost half of the country’s population (47.5%) is under 18 years of age, according to data from Unicef.

At the moment, he has eight volunteers to train the kids. One of them is Nilton Ye, 32 years old. He was one of the people in charge of the maintenance of the place until the authorities canceled the service, he says. Since she is very fond of children and had lost her job, when Seidi offered to stay, she didn’t think twice.

But there is more. Seidi has many plans. He takes the mobile out of his pocket again, while he walks down the field and the boys follow their games around. Cheetahs Women’s Soccer, it reads on a shield that shows on the screen. “We have a women’s soccer project. We are looking for financing ”. They, he says, face a lot of problems to play. “Because of religion,” he clarifies. “I am Muslim, but I joined religious leaders, one Christian and one Muslim, to teach my community that soccer is not bad for girls; they don’t have opportunities, but sport can change their lives ”. And he shows a photograph of himself with the religious to demonstrate his words.

Young women and girls are the most vulnerable, with less access to education than boys and with declining literacy rates

“Guinea-Bissau society is deeply patriarchal,” notes Unicef ​​in his 2019 report on the situation of children. “Due to gender bias in access to resources, poverty affects women more than men. Young women and girls are the most vulnerable, with less access to education than boys and with declining literacy rates ”. Female genital mutilation is also a general practice in both rural and urban settings, emphasizes the organism.

Girls, as soon as they reach puberty, are considered adults. “The sexual debut coexists with the traditional norms that marriages are ‘agreed’ by the parents and take place at an early age of 12 to 13 years, against the law.” From the age of 10, it is common to see boys working. Muslims are sometimes sent to Koranic schools (in Guinea Bissau and Senegal) where they are forced to beg and suffer ill-treatment. They become talibés children.

“This is a poor country and there is no support for children. They get bored at home, here they are free to have fun and I think child crime is reduced ”, explains Seidi. “They’re playing,” he waves his arms, pointing from one side to the other. But he sees even more than that. “If you look at these street kids, some of them will make the national team.”

Kyrgyzstan and Tajikistan agree to ceasefire after deadly clashes

Resident Evil Village Will Offer An Open Map The Player Can Get Lost In, Says One Developer