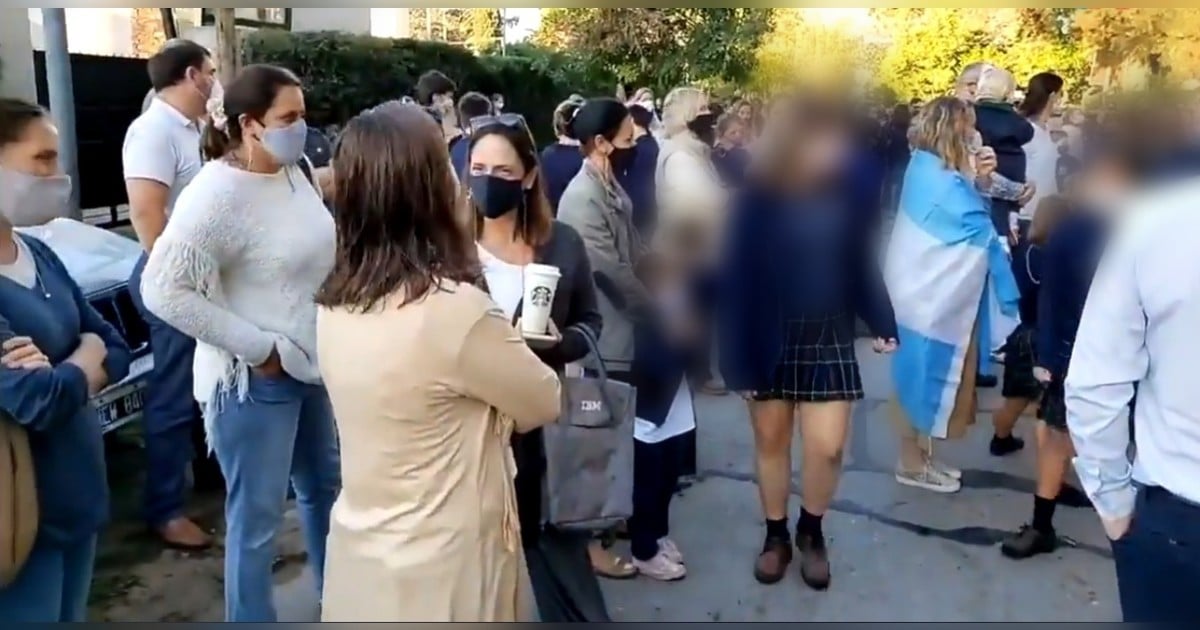 During this morning, self-convened parenting groups from the Partido de San Miguel, mainly from schools in the town of Bella Vista, gathered at the doors of the schools to ask for the opening of classrooms and presence in classes in different establishments in the area, in its most religious education. But to the privately managed communities, there were even two publicly managed communities.

The convocation was organized by parents of students of private and public schools that this Monday began the week behind closed doors after the decision of the national government to restrict classes throughout the Metropolitan Area of ​​Buenos Aires (AMBA), something that in the City of Buenos Aires is not fulfilled by decision of justice before an appeal of the Buenos Aires government, but which did begin to rule in Greater Buenos Aires.

“We found strong evidence showing that the absence of the boys in the classrooms it generates a serious damage to your health. “, the lawyer Ignacio D’Alessio, a resident of San Miguel, who presented an amparo to the Federal Justice to invalidate the decree that suspended classes, assured the local Bella Vista media.

“We presented an injunction,” he explained, “which was lodged in Court No. 2 of San Martín, seeking to avoid the measure, since ignores essential rights, such as education, the right to work, the right to health, which they are ultimately human rights which are what the judge has to consider when deciding and deciding according to his criteria. “

With no judicial definition in sight, the parents chose this Monday to take their own initiatives and call for a symbolic hug to the schools.

On San Miguel, the mayor Jaime Méndez He also opposes the suspension of face-to-face classes. For this reason, the Peronist communal chief who is part of the ranks of Together for Change published a decree declaring education “essential” at the municipal level.

That provision allowed maintain presence in the Child Development Centers and family (CDIF) that the Commune has. Méndez had anticipated this measure the day after the announcements by President Alberto Fernández, when in a gesture clearly of rejection he visited one of those establishments and was with the boys who attend.

The CDIFs, which will continue to be open, are spaces for children from between 45 days to 3 years old, and its objective is set on the integration, dedication, care and development of children together with families.
Now, the opposing mayor requests that the Province do the same that his municipality to guarantee the presence in the schools of all the Buenosairean territory.

Last Wednesday, President Alberto Fernández issued decree of necessity and urgency 241/2021, in which he established the suspension of face-to-face classes due to the rise in coronavirus infections in the AMBA. The decision took several by surprise, including ministers Nicolás Trotta (Education) and Carla Vizzotti (Health), who hours before had publicly defended presence in schools.

The General Directorate of Culture and Education of the Province issued a statement in line with the presidential decree, which explains how the schools will function between Monday, April 19 and until April 30, inclusive, and anticipate heavy penalties for non-compliance. Provincial government sources told the news portal El Destape that educational establishments that do not comply with this may “be sanctioned”, either with a “warning until the power to lose the qualification”, depending on the magnitude of the breached rule.