In pictures, after 12 years, an elephant was reunited with his doctor 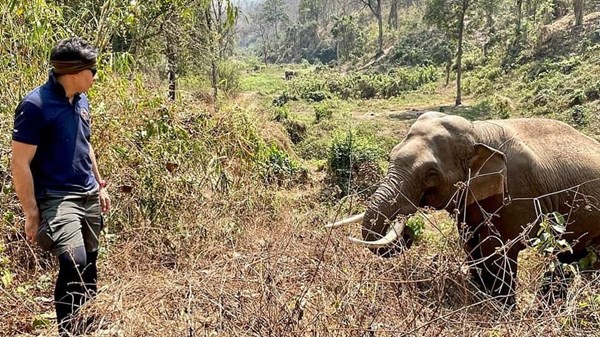 The elephant is one of the most mammals that have a very strong memory that keeps events and places for many years, and what is impressive is that it is a smart animal that is aware of its enemy from its beloved and avoids what harms it.

The newspaper reported that during a tour by Batarabol Manion, the veterinarian indicated that he recognized the distinctive sound of the elephant, which he encountered 12 years ago, which is called “Plai Thang”, and when he approached the elephant, he extended his proboscis to his hand.

Manion confirmed that the elephant recognized him and said, “I remember the sound very clearly … Plai Thang’s noise is very unique.”

He added, “Plai Thang was very aggressive when we first met, and his body was weak, and he could not fight the other elephants..it took a long time for him to recover but we learned that he is very intelligent and takes care of himself.”

He continued, “Recently, we met again … we were able to remember each other as we greeted … It was a very special moment.”

Batarabol said he hoped to “encourage everyone to appreciate the work people do with elephants.”

It should be noted that in the year 2009, the elephant was found struggling through forests in Rayong, eastern Thailand, and was suffering from the deadly trypanosomiasis, a parasitic condition also known as sleeping sickness, and other diseases, as the weak animal was transferred to the Forest Industry Organization area. In Lampang province, to be treated by employees of the Department of National Parks, Wildlife and Plant Conservation, as he was released after several months after his recovery.

Elephants are the official animal of Thailand, and there are an estimated 3000-4000 of these animals that live in the country.

Acciona’s board approves the listing of its renewables business

In an unpredictable election, the only certainty in Peru is that there will be a second round