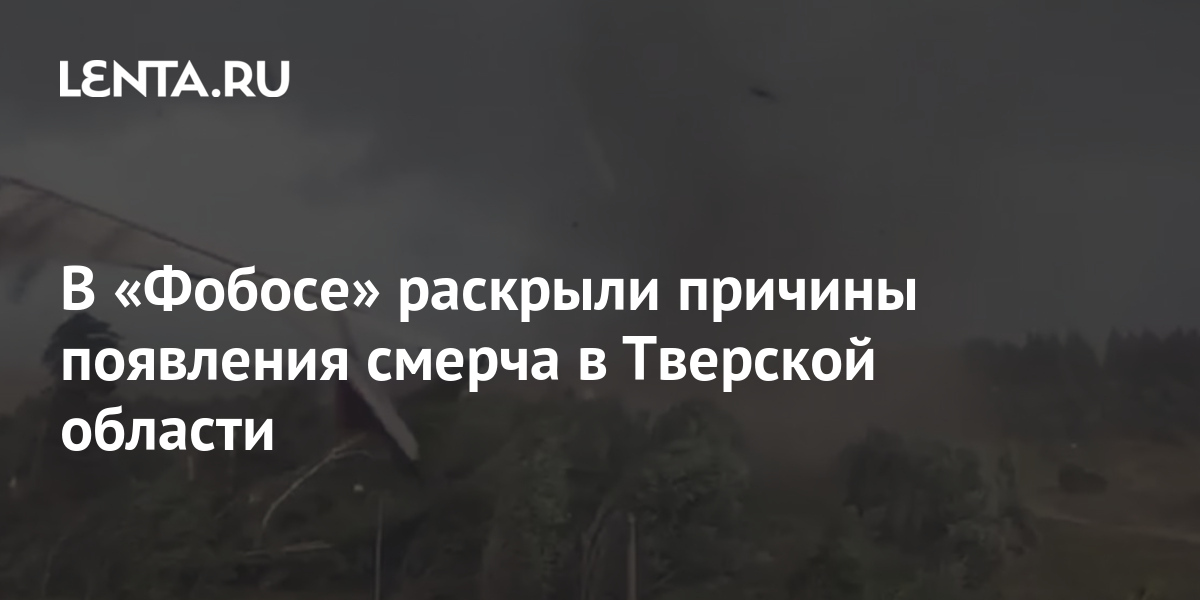 The leading specialist of Phobos, Mikhail Leus, revealed the reasons for the appearance of a tornado in the Tver region, due to which at least 15 people were injured, three were killed, and the roofs of about 70 residential buildings were damaged. In an interview with Lenta.ru, the forecaster explained that the cause of atypical natural phenomena in central Russia was the cold atmospheric front of the cyclone that came to the north-west of the country.

On Monday, August 2, in the Tver region, the wind increased to 25 meters per second. Thunderstorm began. The worst of all the elements cleared up in the city of Andreapol. There, trees fell on roads and residential buildings. At least 90 trees have been felled. The tornado damaged power lines, causing problems with electricity in the region.

Three people became victims of the disaster – two adults and a child. According to the latest data, the number of victims has reached 15, reports TASS… Strong winds partially destroyed the roofs of about 70 buildings. 1.6 thousand houses are de-energized in the Tver region.

Emergency services have begun to eliminate the consequences. The commission was headed by the governor of the Tver region Igor Rudenya. The head of the region instructed to provide all the necessary assistance to the victims and their families, to promptly restore power supply, and carry out other work.

In the Tver region, due to bad weather, an emergency warning and a yellow level of weather hazard were announced.

Mikhail Leus, in a conversation with Lenta.ru, said that such phenomena are not uncommon on cold cyclone fronts. Although tornadoes or tornadoes are rare on the territory of central Russia, the specialist noted, they can be expected under certain circumstances. “Large temperature contrasts, powerful cumulonimbus clouds, high speed of movement of the atmospheric front – all this together gives such a weather phenomenon,” the expert explained.

The expert estimated the speed of the tornado, which was recorded on August 2 on the territory of the Tver region. “There is such a Fujita scale. It can be used to determine the intensity of the tornado. From it, based on the wind speed, you can estimate the strength of the tornado. We can also go from the opposite to determine the intensity of a tornado, if, for example, it was in the field and did not produce any special destruction. Based on the destruction, we can assume what the speed of the tornado was there, since unfortunately there is no weather station in this settlement. Judging by the destruction, we can assume that the speed of this tornado was from 50 to 90 meters per second. But this is theoretical reasoning, ”the expert shared.

According to Leus, this situation was predicted in advance by Phobos specialists. “During the passage of the cold atmospheric front, associated with the cyclone that came out yesterday to the north-west of our country, powerful cumulonimbus clouds were formed, which caused heavy showers, thunderstorms and squall winds of 20-25 meters per second. We talked about it yesterday and even the day before yesterday, ”said the specialist.

In June, heavy rains fell on the east of Crimea, and one and a half monthly precipitation fell in Kerch and the surrounding areas. The officially confirmed amount of damage from bad weather on the peninsula amounted to 4.6 billion rubles.