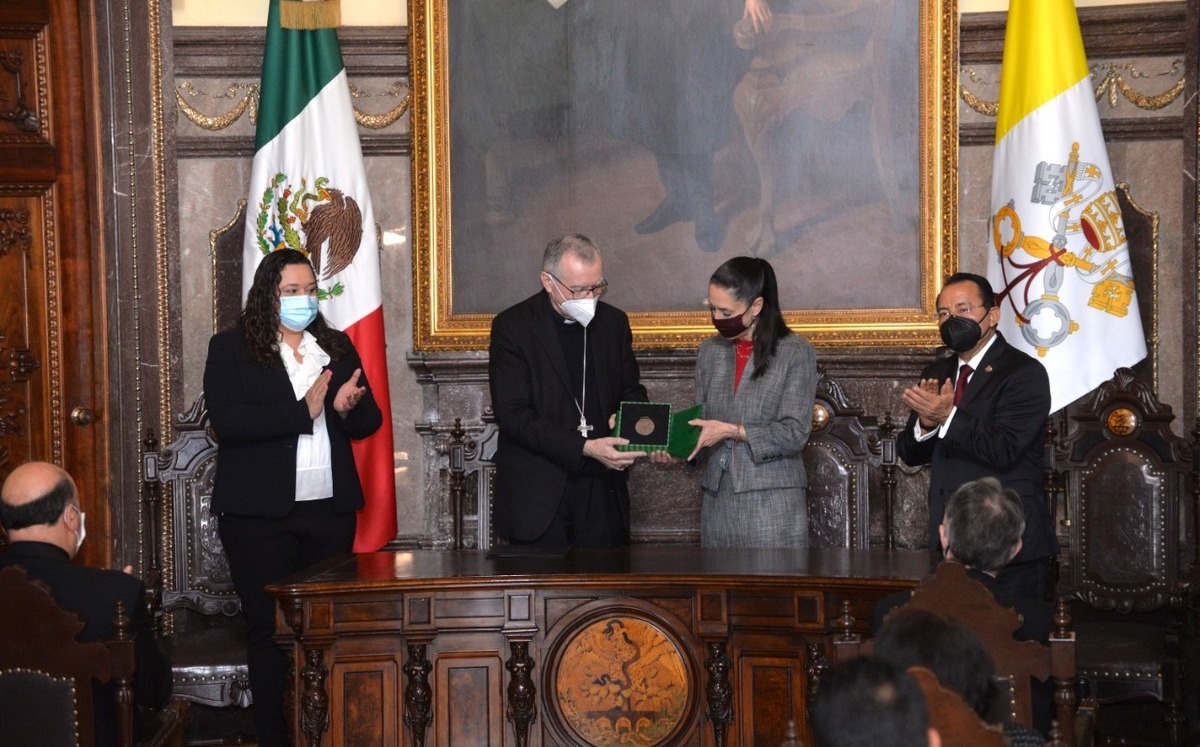 The Head of Government of Mexico City, Claudia Sheinbaum, assured that as a secular state there are great coincidences in the way of governing in the capital of the country with the ethical principles of Pope Francis I such as social justice, respect for diversity and ending the corruption.

At the Distinguished Guest Appointment Ceremony for Cardinal Pietro Parolin, Vatican Secretary of State, the president of the capital stressed that the role of the government that she heads “recovers the essence of the public function, of service to the majorities without privileges, without corruption, with transparency ”as well as social justice.

“We are a secular state that, starting from the transformation of public life in Mexico, fights an individualistic and mercantile vision of values ​​and maintains that solidarity and attention to those who have the least is the essence of our vision.”

He indicated that regarding the visit to Mexico City “I want to acknowledge the values ​​that guide Pope Francis I, who, being a cardinal, renounced the wealth that he may have inherited from his family in homage to Saint Francis of Assisi.”

“I refer, even as a secular State, but recognizing principles that are fundamental and that in a certain way unite us; some of the principles advanced by Pope Francis I and in which we find great coincidences. “Precisely in this year of rescue of the historical memory of our city and of our country, the encyclical Fratelli Tutti reminds us: the peoples it alienates in its tradition and due to imitative mania, imposing violence, unforgivable negligence or apathy, they tolerate having their souls taken away from them, they lose along with their spiritual physiognomy their moral consistency and finally their ideological, economic and political independence.

“In relation to social justice, the Pope has expressed himself on different occasions in a critical way to the orthodox free market policies and in his own words the immoral concentration of wealth that provoked in the encyclical itself Fratelli Tutti emphasizes, the social purpose of all forms of private property as part of the Christian tradition and advances what it considers the five fundamental bases to build a new social justice: reducing inequality, justice as the highest value, empathy in the face of the pain of others, history as the driving force and go to town”.

He said that there are other coincidences: addressing the causes of violence and the struggle to ensure respect for human rights, including the right to freedom. diversity and a life free from discrimination.

“We value in this sense the respect that Pope Francis has expressed. From the government of Mexico City we guarantee a life free from all kinds of discrimination, we firmly believe in the right to diversity. In relation to the social and solidarity economy, we recognize the value of the reference to people’s right to decent work contained in the encyclical that says the current world social reality beyond the limited interests of companies and a questionable economic rationality , it is necessary to continue seeking as a priority the objective of access to work by all.

“And the rescue that it makes in this same encyclical to the work of rural workers is imperative to promote an economy that strengthens productive diversity and business creativity.”

He assured that Mexico City is working to make this a city of innovation and rights, a city where access to the great rights to education, health, housing, and culture is guaranteed as a basis for reducing the inequality and guarantee the safety of people.

The principles that the Vatican promotes, Pope Francis I, in a meeting with young people in Macedonia, referred to cooperation in these terms, “this is a beautiful secret to dream and make our life a beautiful adventure. No one can fight life in isolation. A community is needed that sustains us, that helps us and in which we help each other to look forward, that dreams together matter; you only run the risk of having mirages in what you see, in what there is not. Dreams are built together and this is a topic we strongly believe in. Before competition comes cooperation and solidarity; before market value, there are human values. Two principles that overcome the challenges you face”.

“Mexico City has been throughout its history a global city, supportive and respectful of its relationship with other cities and with the multiple migrations to build the city that we are. Today we are recovering the best of our history and traditions, we are transforming the bases for the construction of the city and the country that we have collectively dreamed of, in contrast to that individualistic model that was imposed on us in the recent past, where everything has to be done. to put a price on it so that it is valued, nothing else alien to a moral economy ”.

And he added that in Mexico City it is recognized from a model of moral, ethical, solidarity economy, put one with a view to guaranteeing great human rights and ending exclusive privileges and the commercialization of public life.

At the ceremony, the head of government assured that this year marks the three-year anniversary of the current administration, “A year in which we are celebrating 3 years of the transformation of our country and our city. A new way of governing with humility to serve the people, a government proposal that recovers the essence of the public function, serving the majority without privileges, without corruption, with transparency ”.

I affirm that an austere government that uses public resources to directly benefit the people, without intermediaries, “we govern with a mandate with which you will recognize the highest ethical values: do not lie, do not steal, do not betray the people” and work for a free environment, healthy food, work.

Under these coincidences, he mentioned: “Cardinal Pietro Parolin we celebrate his visit and today with great pride we name him from Mexico City.”

For his part, Pietro Parolin recalled in a very intimate and heartfelt way the time in which he served in the apostolic nunciature in this capital “a city rich in history and art, science, study, forever marked by the smiling face of the initiatives of the Chilangos. ”.

“Today more than ever this city, aware of its own historical identity, has assumed cultures and languages ​​and religious expressions a sign of globalization and human mobility, but also as a dialogue laboratory for local and international encounters and I would also like to express my sincere gratitude. for the presentation that you have made of the politics of the government of the politics of the city government and of the role that you highlighted in a very special way of Pope Francis on the issues of social justice on the issues of solidarity and development of each and every one of the people ”.

During the ceremony, he evoked all those who are living in more precarious situations, suffer from lack of work and for getting what is necessary for the good of their families.

“How many have experienced suffering and pain from the pandemic? How many look to the future uncertainty? From my heart I would like to repeat to all of them the words of Pope Francis, do not let hope be stolen, the true hope, the one that has a real foundation. Do not lose the courage to lift your gaze upwards, towards the lord of history, towards the one who never abandons his people”.

The president of the Judicial Power of Mexico City, magistrate Rafael Guerra Álvarez, participated in the official ceremony at the headquarters of the Old City Hall.