In Amatrice I saw death in the face. Why in Italy do we accept earthquakes without doing anything to prevent them? 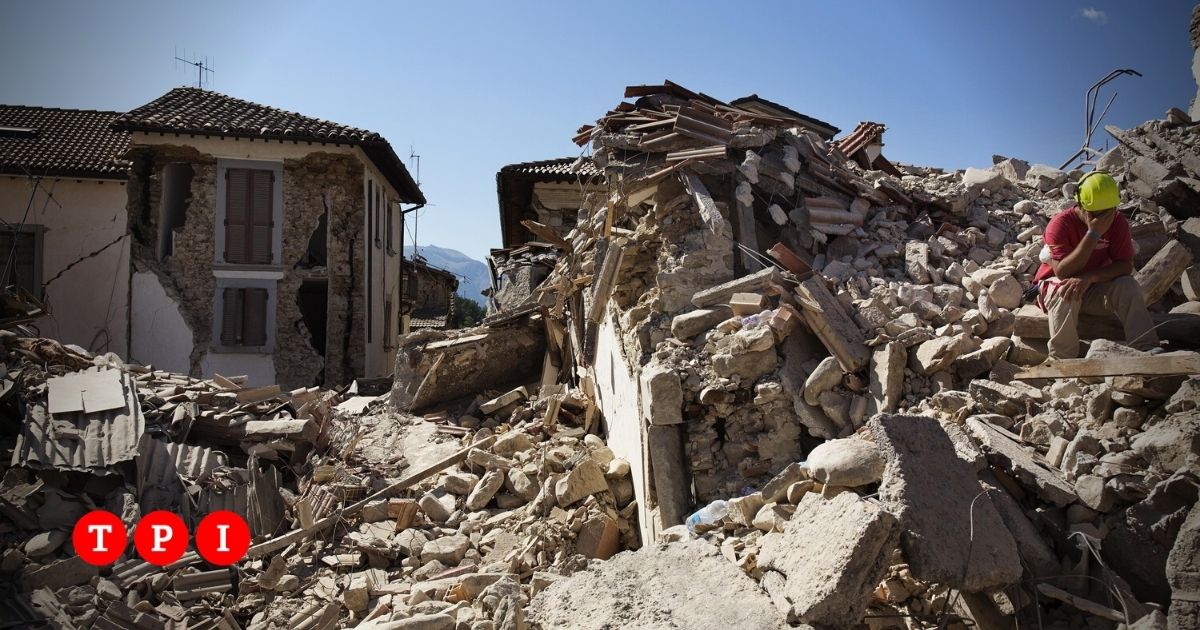 That night of August 24, 2016, at 03.36, I opened my eyes awakened by the deafening noise of the many wardrobes, dressers, beds and bedside tables that swayed all together, violently, on the floor of my house in Sommati, a fraction a few kilometers away from Amatrice.

An unnatural noise that I still struggle to forget and explain. A noise that those who did not make it did not have time to listen, because the houses, the roofs and all the furniture ceased to exist with them, swallowing the memories and the lives of entire families destroyed forever.

It was the sinister noise that announced the earthquake that destroyed, in a few seconds, Amatrice, Accumoli, Arquata, Pescara del Tronto and countless small villages in the heart of the Apennines, with a magnitude 6 on the Richter scale recorded a few kilometers underground. , right in Accumoli. The equivalent of the energy released by 20 thousand Hiroshima bombs, according to Antonio Piersanti, seismologist of the INGV (National Institute of Geology and Volcanology, ed).

But I still didn’t know. Disoriented by the indecipherable noise, I opened my eyes better, trying to understand what was happening and – without yet realizing it, even if I had already guessed – I tried to get out of bed to run to my children in the other rooms. But I couldn’t walk.

The powerful sway of the house did not allow me to stand up, I tried to walk, but it was like trying to stand upright in a giant Tagada. Everything was swaying: the chandelier, the bed, the house. The shock seemed to never end. And I didn’t know what to do, frozen by a very strong and unexpected shock.

I realized the magnitude of the earthquake when the quake ended, walking down the stairs barefoot over broken shards and rubble, dragging the boys behind me, to reach the front door.

“The stairs are full of glass and debris and I am walking over them with bare feet, so the matter is serious.” This registered my dazed brain to try to shake me from the shackles of the ongoing trauma, sending tons of adrenaline to every possible muscle that could make me escape.

How unnatural is it to run barefoot on the sharp shards if you are not really afraid of dying? The only thing that mattered was to escape out into the open before a shock came to finish what was left of us and our home. But the door did not open. It was blocked.

I started kicking and kneeling the door to try to open it, but without success, as the anxiety of not being able to save my children and being buried in the hall grew more and more. Not for a second did we think about going up the stairs to try to open the windows on the first floor.

The house, which had protected us until that day, had become a monster from which to escape. And the only way we took into consideration was the door that separated us from the outside. Then we started screaming, when we heard someone passing by. But the first ones who managed to get out, rightly, ran to help those who remained under the rubble.

We stood there in the entrance on the ground floor of a four-storey house, immobilized by fear for an indefinite time, awaiting, conscious and devastating, for the next shock. When your roots sink into a seismic land you know what happens when an earthquake arrives like this: there is a first big shock and then many others less strong, but potentially equally decisive for the fate of houses already mortally wounded and, above all, often unsuitable to withstand earthquakes. And I knew it was coming and I didn’t want to be there. And then I kept kicking and screaming as I watched the chasms in the fragile walls.

When, from the outside, they finally broke down the door and we went out, I really realized the gravity of the situation. The silence of that cold night, illuminated by a very full and disturbing moon, was broken only by the cries for help of those who had been stuck in houses or under the rubble.

The street was full of plaster that had fallen from the cracks in the walls of the houses and the stench of gas, coming from the cracked pipes, was very strong. I thought that something great had broken, in my destiny and in everyone’s. I sought refuge in a parking lot without buildings around, while the tremors followed one after the other, without knowing what had happened to my parents, my brother, my aunt and my grandmother, on the other side of the country.

I did not know that my brother had pulled my mother out of a pile of rubble and then ran to look for us barefoot, through collapsed houses and despair. I did not know and understood nothing, trapped in my own bubble of terror, like all those who survived the earthquake.

We were all there in the parking lot and yet we were far away. Everyone lost in his pain, without wanting to talk or share that immense trauma that had hit us in any summer night. I saw help arrive, in a livid dawn, first with some shy vehicle that ventured through the dark streets interrupted by collapses and landslides, and then with the helicopters that, landing close to the battered houses, sanctioned the enormity of the event, with the deafening noise – again – of their blades.

I called my husband – who had returned to Rome two days earlier – from my son’s cell phone, to tell him what a great thing had happened to us. But he did not understand, until he found himself on the Salaria with thousands of other cars trying to reach Amatrice, Accumoli, Arquata and Pescara del Tronto, with the four arrows inserted and the gas at full throttle, to see how their loved ones were doing. .

And then, when he came to my country and saw people wandering in their underwear like ghosts in the rubble of family homes, he understood. And I too, when at dawn I accompanied my mother, who had remained under the rubble long enough to survive, in the field hospital set up on the outskirts of Amatrice, I really understood.

Seeing the partially collapsed columns of the Don Minozzi convent and the procession of rescuers, I understood the magnitude of the event that had hit us personally. Suddenly I realized that we were the grisly news of the opening of the news and newspapers. What had always seemed to me distant and concerning the “others”, from 11 September onwards, now concerned us. It was we, a mountain community of a few thousand inhabitants, who were suddenly devastated by a huge disaster, which would change our lives forever.

On the way to escape to Rome, dusty and stunned, the hardest part began. The recovered phones – initially filled with news request messages from the capital – began to ring, relaying the gruesome account of the earthquake victims. A dismal appeal of absentees made up of friends, acquaintances and familiar faces, victims of an appointment with a cruel destiny, which had brought them there. On that day and in those fatal 120 seconds. Like my friend Emanuela, like Silvia, Barbara, Alessandra, Maria, William and all the 304 unfortunates who lost their lives in an earthquake that in Italy in 2016 was still destructive, but which in Japan would not even scratch a sidewalk.

We are a country with a very high seismic risk that still pretends, for economic convenience, not to be. After every devastating earthquake (from Friuli to Sicily, passing through Calabria and Irpinia) we always seem to forget everything.

Let’s pretend we don’t have a dozen active volcanoes on our territory and about three hundred faults, because we don’t have the economic resources to intervene on all the existing constructions in the area. And then cyclically, we find ourselves closing the stables after the oxen have escaped.

“Amatrice is no more”. So the then mayor Pirozzi defined the situation to the rescue. And after five years, Amatrice still isn’t here. Nor does Accumoli, or Arquata or Pescara. Because rebuilding is longer and more difficult than preventing. Always very good at restoring with our efficient Civil Protection in the emergency, but unable to seriously prevent the next calamity with safety measures.

Always forced to deal with the eternal Italian problem represented by the large audience of crafty people ready to take advantage of the various amnesties and bonuses to their sole advantage, which force the rest of the honest population to desist in the face of the disproportionate amount of documents necessary to access the reliefs economic for seismic adjustments.

It would have been enough to invest 10% of what we are spending in “seismic retrofits” to rebuild half of Central Italy, to avoid those hundreds of deaths, the loss of entire villages and a priceless historical and artistic heritage.

Whole countries cannot continue to collapse and die each time hundreds of people with relatively low tremors (in Italy the strongest earthquake was a 7.3) while in Japan with tremors reaching the ninth degree of the Richter scale, there are often damages and deaths related to the secondary effects of the earthquake. Not because the buildings collapse, but because they cannot manage to stem the immense force of nature that is unleashed with devastating tsunamis or landslides, or even with damage to nuclear power plants overlooking the Pacific Fire belt.

We, on the other side of the world, still rail against a stepmother nature at every earthquake to cover up reality: if in Italy there are still deaths under the rubble it is the fault of man, who fails to tame earthquakes that, at the maximum, they reach 7 on the Richter scale, not Nature’s.

In respect of these 304 broken lives, without wishing to exploit the incident politically, we should stop talking about ecological transition, digitization and bridges over the Strait, without first securing what remains of our country. Because our homes, our schools, churches and all public buildings must return to being safe places in case of danger, not monsters made of mortar and tuff ready to collapse at the first shock from which to escape, if you can. And why no one ever has to tell a story like mine again.

READ ALSO: TPI’s investigation into reconstruction after the earthquake in Central Italy

“Regardless of the state of vaccination” .. an American recommendation for children to wear masks in schools