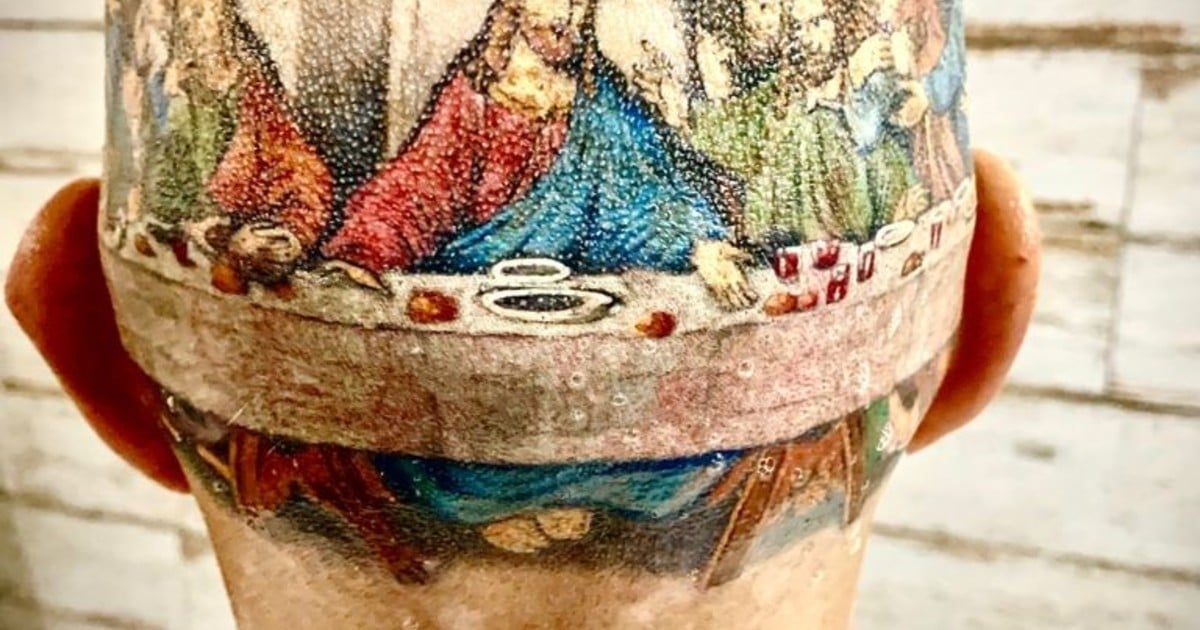 The love for his religion marked him forever as a person and he went further, leaving the traces of this passion on his own skin. Angel Garcé (54), neighboring dentist from the district of Pilar, He decided get tattooed on your head “The Last Supper”, the famous work of the Italian artist Leonardo Da Vinci.

Garcé, after a time of meditation, decided to call the hairdresser to shave and be able to fulfill his wish. “Some things coincided with me: I have gray hair and River was champion in Madrid. I went to the hairdresser and asked them to dye everything white because the players were going to silver their hair. It was crazy, I went through various colors and then I had to shave to get the tattoo. I already came up with the idea of ​​doing something to myself, but I didn’t know where, until I saw an episode of the Vikings series and when Ragnar got a tattoo on his head I said: ‘I want this’ ”, he recalls.

The dentist also enjoys sing in a rock band without forgetting his devotion to Catholicism. “I did my first spiritual retreat when I finished high school, before that I didn’t believe in anything at all. It is not fanaticism, it is something that does me good. I try to go through life saying that you have to do good things and that everything would be better from the hand of goodness ”.

Together with the author of the stories impregnated in his body. Recommended by a friend, Garcé chose a tattoo artist based in La Plata.

He has loved this iconic work of art for as long as he can remember. “One of the things that are done in religious retreats is the washing of feet, at first I did not understand them until I realized that it is an act of humility par excellence and from then on, everything that the work communicated marked me, that’s why I chose it ”.

And he adds: “Leonardo, at the time he painted the picture, was not considered an elite artist. The material he used that smoothed the wall was not very stable, so it deteriorated quickly and was very difficult to maintain. I feel identified with that part of his life, that he had to fight it ”.

In process. The tattoo was achieved after ten sessions that lasted two hours each.

“The artist waited to capture a moment that is different from all the works that represent the Last Supper. Leonardo captures when Jesus announces that one of the disciples is going to betray him, hence the gestures of each one of them ”. The dentist comments that it also symbolizes the act of when the priest consecrates the body of Jesus at mass. Ángel added: “Communion, forgiveness and service are established. Everything the work represents and what has always marked me ”.

The dentist, already with a sleeve design on his right arm, called the same tattoo artist, Rodrigo Fernández, and told him what he wanted to do. “He told me he was crazy,” he commented with a laugh. “We tried the first session and it went well, we did not know if the scalp was going to become inflamed, but it was banned.”

Garcé in his office. “There were reactions of all kinds when patients saw the tattoo, most of them told me that ‘it must have hurt.’

The author of the tattoo is located in La Plata, they met for ten sessions once a week for two and a half months. “The tattoo artist told me that there were a couple of people who got tattoos on their heads and they lowered their pressure, luckily not me. At first he put an anesthetic ointment on me and it didn’t hurt, but after 10 minutes it started to bother me. The most sensitive place was behind the ear, it seems to burn you ”.

Fernández first started with the black and gray details and finally defined the colors. “With the passing of the sessions, we would put the ointment in stages, a few minutes would pass and we would place it in the next place that I was going to tattoo. I ended up crying, but it was what I wanted, ”says Garcé.

Family love. Garcé with his wife, Erica, and their two children, Isabella and Mateo.

The father of two children, Isabella and Mateo, the day he appeared with his head tattooed from ear to ear, his daughter grabbed her head and said: “What did you do to yourself, dad?”, While his wife “wanted to kill him,” he said. laughing.

“My hair grows very fast. If I let it grow, it covers practically the entire tattoo. A few days ago I went to the hairdresser to shave, other times I let it grow… I see it depends on the mood ”, says Garcé, proud of the result. 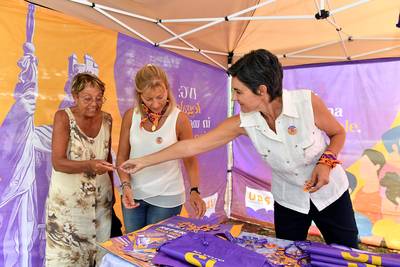