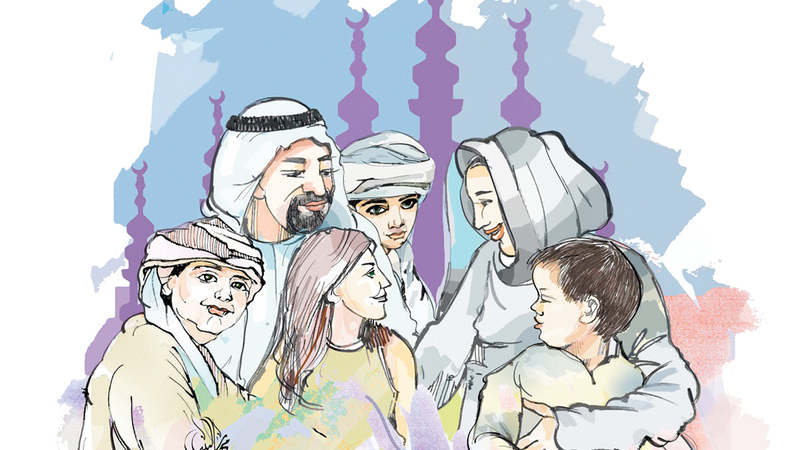 Director of the Social Protection Department at the Ministry of Community Development, Iman Hareb Al-Falahi, confirmed that the ministry provides protection and care for children of unknown parentage, and children deprived of family care, through two incubation systems, calling on families wishing to embrace children to apply through the ministry’s website.

Al-Falahi added that the first system aims to regulate the custody of children of unknown parentage to ensure their rights, provide them with health, psychological, social, educational and recreational aspects, protect them from exposure to abuse, and create and secure the living conditions necessary for their natural growth by securing foster families for them.

She explained that the “Wadeema” law stipulates that the custodial family must be a Muslim citizen residing in the country, and it must consist of a married couple whose age is not less than 25 years, and that neither of them has been previously convicted of a crime against honor or trust, and that They are proven free from infectious and psychological diseases and mental disorders that affect the health and safety of the child, through a report issued by an official medical authority.

And she stressed that the family should be able to support its members and the financially fostered, and pledge to treat the child well and raise him with a good upbringing, and take care of his health, education, protection and development, and any other conditions decided by the minister based on the committee’s recommendation in a manner that does not conflict with the provisions of the law, as the regulations allowed the minister to exclude some families The custodian with regard to the condition of being free of diseases that do not pose a threat to the health of the child.

She referred to the text of the executive regulations of the “Wadeema” law in Article (13) that the committee, when choosing custodial families, should take into account the criteria of cultural and social compatibility between spouses, the age difference between them, and its knowledge of the culture of socialization, the stability of family life, in addition to the custodial family’s home.

Al-Falahi presented the most important criteria and conditions related to the second case, which concern children deprived of family care, explaining that if the child is not present in his natural family, and that his presence in it may endanger the child’s mental, psychological, physical or health safety, the article stipulates ( 47) of the law stipulates “the temporary placement of the child with an alternative family or an appropriate social, educational or health authority or institution, whether public or private, in accordance with the controls specified by the executive regulations of the same law.”

Al-Falahi indicated that the incubation process is carried out according to specific controls, where permission must be obtained from the Public Prosecution, and the natural family of the child must be informed about the party with which the child was deposited, unless the best interest of the child requires not to report.

She stated that among the conditions that must be met in the custodial family in the event that the conditions for keeping the child with his family are not met, that it consists of two spouses of the same religion as the child, and each of them is not less than 25 years old, that they are of good reputation and behavior, and that they have not previously been sentenced Any of the spouses in a crime involving moral turpitude or dishonesty, and that they prove that they are free from infectious and psychological diseases and mental disorders that affect the health and safety of the child, through a report issued by an official medical authority, and that the family is able to support its members and the child financially, and undertakes to treat them well The child and his proper upbringing.

Iman Hareb Al-Falahi stated that the executive regulations of the Child Rights Law placed obligations on the custodial family to abide by them, as Article 14 stipulates that the custodial family or the party with which the child is placed is obligated to take care of the child and provide him with all his basic needs, such as food, clothing, drink, shelter, and good health. transaction.

She stressed the good care of the child educationally, healthily, psychologically, physically and morally, and not to give up his care or hand him over to his parents, one of them or another custodial family, even for a temporary period, except after the approval of the body in charge of following up on the child, and that the custodial family informs the Ministry of any change in the family’s situation such as the divorce or death of a spouse, the marriage of one of the family’s children, or a change of residence, and also informing them of the child’s enrollment in school, his absence from home, his dropping out of studies, his escape, or his death.

Director of the Department of Social Protection at the Ministry of Community Development, Iman Hareb Al-Falahi, said that the system for fostering children of unknown parentage requires that the family be Muslim because the child has the nationality of the state, while the system of fostering children deprived of family care or at risk of abuse guarantees the provision of a foster family for them from the religion The same, because the child was born biologically to a well-known family from a valid marriage contract, but it is not qualified to raise him, which necessitated the preservation of his interest and safety, so he permitted the temporary placement of the child with an alternative family.

The Ministry of Community Development confirmed that requests to incubate children of unknown parentage are subject to screening by a specialized committee, to nominate families who meet the conditions, and a case study is conducted for the nominated family, and the work team visits the family in its home to see its status, and the matter is presented to the incubation committee to express its opinion on assigning the child to the candidate family An incubation agreement is concluded with her, and the child is handed over to stay with her for a trial period (six months, subject to extension), and the child is periodically followed up during that period. If the family’s eligibility is established, a family with a foster child is approved.