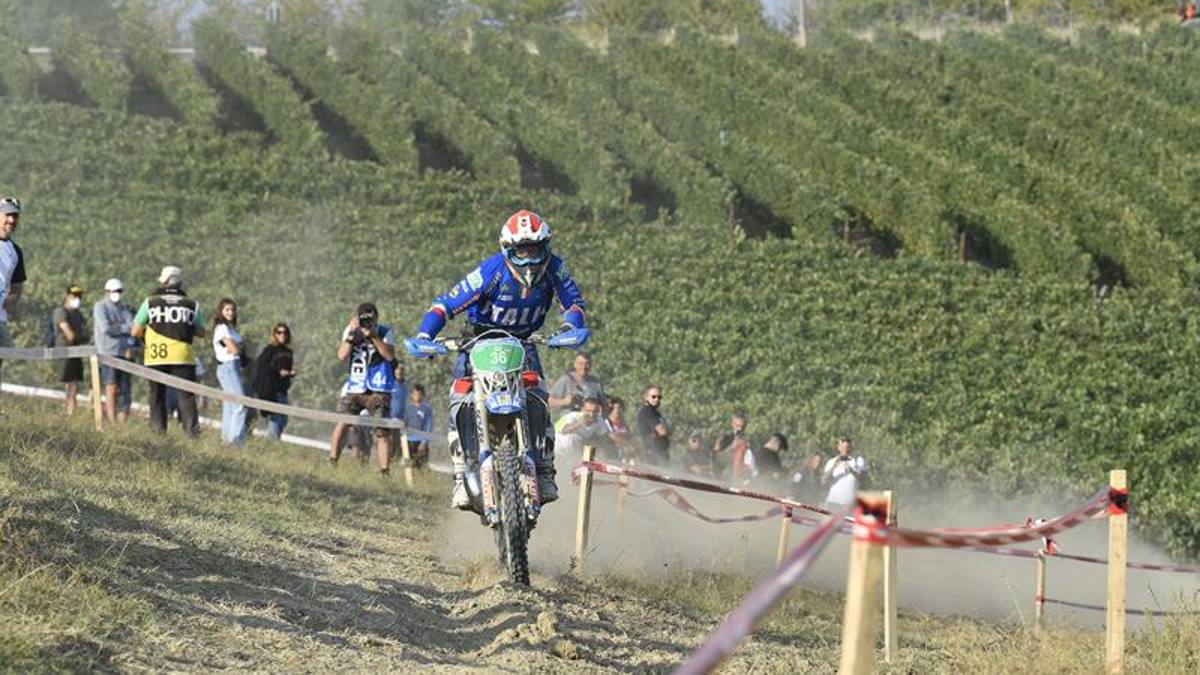 The Six Days Enduro closes at the Cassano Spinola cross-track (Al): Italy triumphs after dominating the Staffora Valley and Val Curone. Verona, Guarneri, Oldrati and Cavallo first in the World Trophy, arms to the sky for Macoritto, Morettini and Pavoni in the Junior

Victory has never been questioned. Since the first day of competition of the 95th edition of the Six Days Enduro, taking place in Rivanazzano Terme (Pavia) from 30 August to 4 September, Italy has dictated the law, imposing itself in the three days in Valle Staffora and also in the two in Val Curone . Andrea Verona (GasGas 250 4T), Davide Guarneri (Fantic 250 4T), captain Thomas Oldrati (Honda 450 4T) and Matteo Cavallo (TM 300 2T) have dominated the Trophy since the first special stage of the first day, when the class’ 99 Verona opened the dance at 8:16 at the Casa Tui Cross Test, leaving Spain, the United States, Sweden and France (the latter out on Day 5 due to the double crash of Espinasse and Blanjoue) only the crumbs, or rather the clouds of dust. The same was true for the three drivers involved in the Junior category, reserved for the Under 23s: Lorenzo Macoritto (TM 250 2T), Manolo Morettini (Ktm 250 4T) and Matteo Pavoni (TM 300 2T) have always maintained the pace of the best in the World Trophy, to underline their competitiveness in the Vase, with France and Sweden good at taking advantage of the retirement of the American Walton (Husqvarna), who excluded the American team from the games, and of the Spanish Francisco (Sherco).

From the early hours of the morning the spotlights were turned on on the Cassano Spinola cross-track (Alessandria), site of the final day of the Isde 2021. In the morning the cross heats dedicated to the drivers registered in the Club Team Award were held, with the victory final that went to the Swedish team Ostra Enduro 1. A mockery for Motoclub Sebino, leading up to Day 5 and behind more than 1 ‘after the cross heat. The Absolute is registered by Davide Soreca (Husqvarna 250 4T), despite some problems related to overtaking in the special stages. Then it was the turn of the girls of the Women Trophy, with the triumph of the Americans led by Brandy Richards (Ktm 350 4T). Second was the Great Britain of Jane Daniels (Fantic 250 4T) and third the Spain of Sandra Gomez (Gas Gas 300 2T, sister of Alfredo, a well-known Extreme Enduro rider). Final seventh place and great satisfaction in reaching the end for the blue Anna Sappino (Beta 250 2T) and the very young Raissa Terranova (Beta 125 2T) and Elisa Givonetti (TM 125 2T), who gained a position on Day 6 on the French Froment , Chaplot and Martel.

Six days of effort, six days of heat, dust, sweat, climbs and descents along the hills of the Staffora Valley and Val Curone. All rewarded by the final joy, when the last blue passes under the checkered flag at the Cassano Spinola cross-track (Al). Winning a Six Days at home is every professional’s dream, doing it by dominating after six days of cheering on a special board has a unique flavor. The first to take to the track are the guys from E1: no useless risk, the former cross rider Davide Guarneri is the fastest of ours, with Morettini, Macoritto and Verona following close behind. A few laps from the end, Guarneri’s crash freezes the audience for a few moments, but “Il Pota” gets up and comes back up to the third position in the heats, with Verona 4th after starting 15th.

Then it was the turn of E2, with only Oldrati at the starting gate: the Honda rider starts well and always remains in the top positions, leading a wise race: “The first two days I went fast, in the others I gritted my teeth . In today’s heat I got a good start, the team did a great Six Days. The injuries of 2021 allowed me to train little and being here is an immense joy ”. Finally it is the turn of E3, with Matteo Cavallo and Matteo Pavoni, the two standard bearers of the TM. Cavallo leads a beautiful race, whipping on several occasions and climbing up to third position, Pavoni completes the race without risk. The shout of joy – from the riders, the speaker and the public – explodes when the last of the red helmets takes the checkered flag, which means only one thing: Italy is the Team Enduro World Champion at Six Days 2021, both in the Trophy (15th victory in history) and in the Vase (14th time). In the World Trophy, on the podium together with our Azzurri, there are the boys from Spain, whose coach is a certain Ivan Cervantes, and the United States of America, fast yes in the Cross Tests and in the Cassano cross-track, but who struggled in the typical online tests of Oltrepò Pavese.