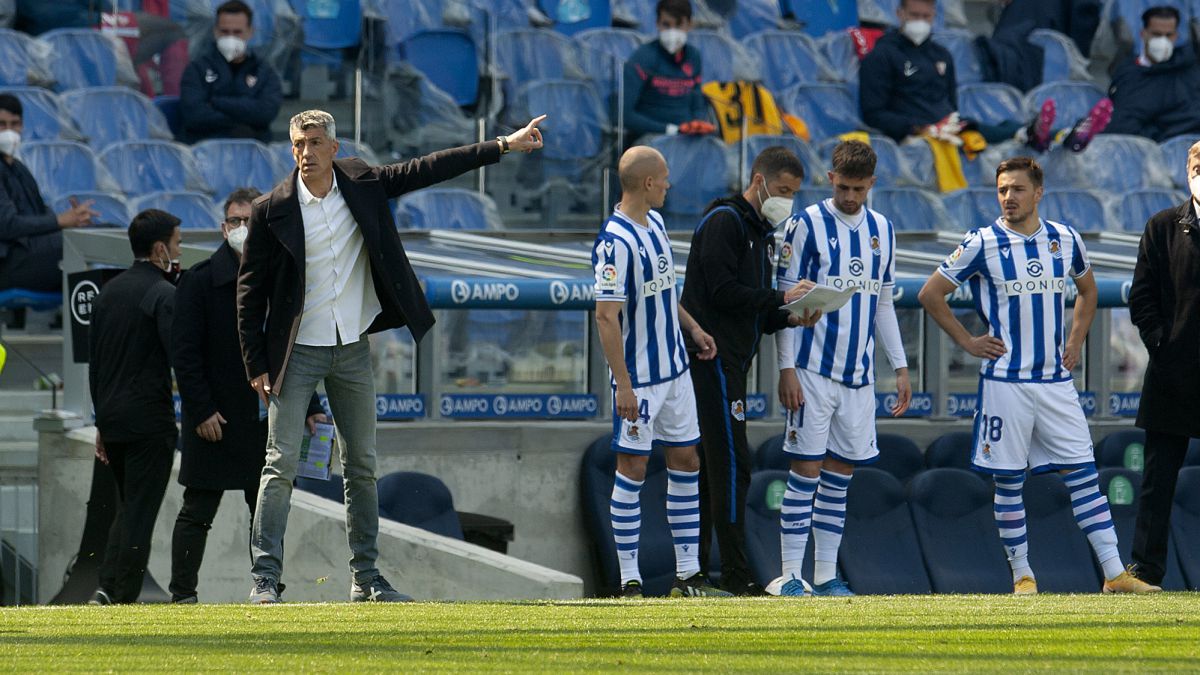 Imanol Alguacil, coach of the Real Sociedad, appeared this afternoon in Zubieta in the run-up to Celta’s visit to Anoeta.

-Only 19 players on the roster. “It is important that all of them are there, but some are differential, we must not hide it, and they are missed, but without excuses. We are 19 and we go with the same illusion as always, whether Silva is there or not. All 19 are prepared and with the ambition and illusion of always we will go to be better than the rival, it does not change “.

-Superliga. “I did not agree at all, and common sense is going to prevail. As a coach I do not like to be given anything, because otherwise there is no passion or feeling, it would not be football, I think common sense will prevail and there will be no that Super League, in fact, the clubs are already getting out of there. I prefer not to enter to value much in that sense. Common sense itself is telling us that it was a mistake to raise it, in football there must be feeling and

passion, and in that Super League all that was not going to exist, and we all know how the issue is going and who wanted to start it. “

-Fuel tank in the final stretch. “We have been in European positions for two years and reaching the Cup final with a year in mind, and the Europa League, for a team as young as ours, it is normal to have ups and downs, but like any big team. But physically We are doing well, and it is more a matter of results, and those of us who are understanding that we are doing well, and I will not make an excuse for how hard these two years have been. There are seven games left in this marathon, the four Kenyans have gone and we are in the strong group, there are seven kilometers left, the wall is difficult to pass, but we are there with energy, enthusiasm and ambition, and I think we do not have a gasoline problem “.

-Three teams fight for Europe. “Everything is very even, Villarreal is playing European competition, Betis is the cleanest and strongest it seems, but I do not want to forget those who come from behind, because there are 21 points missing. Remember that last year nobody gave a hard one for us and we did it at the end. We are there with everyone and we have seven very difficult games for everyone. There are still many points to be played. “

-How to beat Celta. “We are varying the system, but we have also varied when we have all been. We have not always played in the same way, and the nuances in each game vary depending on each game. It has always been a rich team in that sense, although sometimes have been successful and others have not. And the players know what I always ask of them. “

-Celtic. “Coudet has endowed them with a defensive aggressiveness that they lacked, and with the ball they have very good players. They change their minds a lot, when you give them time they start three, other times they stretch with the top two. They have an interesting range because He has very good players. They adjust very well because within the game there are different moments and movements. And the one who best interprets them will surely have the best chance of winning. “

-Win after a losing streak. “The team always needs a victory, and it doesn’t matter where you come from. We always want to win, because the fewer points you have scored in the last games is more necessary, but nothing changes. The team is calm and eager. Now we are missing again. more results than sensations “.

-Merino. “Today is the first day that he goes out to the field and has gone out for a walk. He is doing other types of work to strengthen the area. He is doing everything to reach the end of the league and we hope that together we can help him to do so” .

-State of Silva. “With David we will wait. Because, although he has not started with the group, it seems early for Eibar. When he starts training with the group we will see, and I hope it will be Friday already.”

-Januzaj. “It is differential, but not always. What we cannot expect is that the ballot will always solve us. There is no doubt that he is a super important player, but like everyone else. Januzaj trains like the rest of his teammates, he assumes the role that he is. he’s playing now. And wanting to face these last seven games to be as high as possible. “

Protests against Super League: Angry fans cause cancellation in Manchester