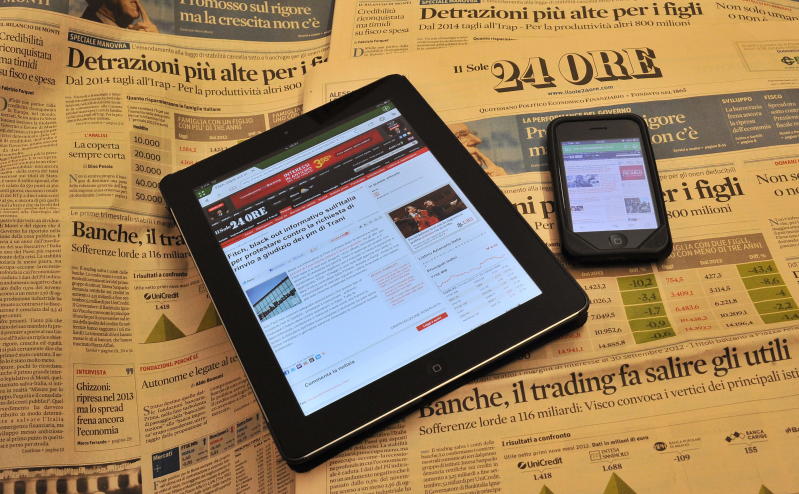 In conjunction with the international debut of Apple Podcasts Subscriptions and the new Apple Podcasts channels, where users will now be able to browse both free and paid channels that offer extra benefits reserved for subscribers, Il Sole 24 Ore and ‘the first Italian newspaper to open a pay channel with an original production exclusively for Apple Podcasts users who have subscribed, placing itself at the forefront alongside the most prestigious international media such as The Washington Post, Los Angeles Times, CNN, Fox News in UsA, The Guardian for the UK and Der Spiegel for Germany.

Il Sole 24 Ore’s rich production of podcasts, which for several years has been producing podcasts and experimenting with new forms of audio content covering all the platforms available on the market, will now be fully available on Apple Podcast with a new double and exclusive offer. On the one hand, the freemium channel ‘Il Sole 24 Ore’ will offer users of the Apple platform all the podcasts edited by the newspaper, characterized by quality information and narration, starting with the very popular ‘Start’, the first daily podcast of news produced by an Italian newspaper, online for over a year and constantly in the top of the most listened to podcasts as well as included by Apple Podcasts in the Top List of the most listened to new titles of 2020.

In addition, an extra episode will be made every week, exclusively for Apple users, which will be published every Monday with a special study on a specific topic by the journalists of Il Sole 24 Ore. At the same time, Il Sole 24 Ore is making its debut with the subscription channel ‘The River Investigations of Money’, an exclusive content offer for the Apple Podcasts platform.

Users will have exclusive access to the entire archive of the 34 episodes of the successful series of inquiries by the journalists of the Sole 24 Ore Roberto Galullo and Angelo Mincuzzi, to the unpublished episodes of Fiume di soldi – one a month – and to the new inquiries produced by two journalists, of which the first will be ” The treasure of Maradona. Wealth, misery and nobility of the Pibe de oro. ‘The development of new languages ​​and formats through which to offer our best journalism is a constant commitment for Il Sole 24 Ore.

Reaching new audiences with substantially new tools, such as editorial podcasts, responding to the desires and needs of consumers that change with lifestyles and technological innovation, is today a bet for all publishers ‘explains Roberto Bernabo’, Deputy Director to the digital development of Il Sole 24 Ore. ‘So’, it is a prestigious challenge to be the only Italian newspaper to be the protagonist of Apple’s new project. We have chosen to do so with two of the leading products: a special edition of Start, the daily news podcast that brought Il Sole 24 Ore closer to the young public and the inquiries of ‘River of money’, by correspondents Galullo and Mincuzzi, with the entire archive and the new series that will investigate the world of money, starting with the secrets of Maradona’s treasure ‘.

The new podcast on Diego Armando Maradona, online from today exclusively only for Apple Podcasts Subscriptions, tells in seven episodes the stories, anecdotes and legends that have accompanied the idol of football from the first day Argentina discovered his talent. until the last day of life, when the world began to know the miseries of a heritage to be inherited, as opposed to the noble greatness of the footballer who has entranced the world.

‘River of money’ follows his life retracing the stages – the exciting and the painful ones – that marked his career as a footballer, coach, image man and businessman. A very wealthy businessman who would have liked to leave the world a legacy different from the one on which legitimate and presumed children are launching themselves.

In the channel ‘Il Sole 24 Ore’ there will be no shortage of successful titles of the podcast production of Il Sole 24 Ore, consisting of 23 titles, including ‘Sessantasecondi’, the pill born for Radio 24 and become a podcast in which the Deputy Director of Sole 24 Ore Alberto Orioli every day comments on the main news in 60 ‘,’ Women of the future ‘by Maria Latella dedicated to successful women under 40 and now in its second season, the two successful series edited by Professor of History of Political Institutions Paolo Colombo including’ Kennedy: the myth and the courage ‘, the weekly podcast on finance by Andrea Franceschi’ Market Mover ‘, as well as’ the two automatic podcasts developed by Sole 24 Ore with artificial intelligence’ Le Borsa Oggi ‘and’ Covid, contagi and vaccines today ‘and the new’ Company Culture ‘series by Alessandro Rimassa to be released on June 22nd.

An offer that makes up the audio content strategy of the 24 ORE Group together with the rich production of Radio 24 including transmissions and original podcasts, also present on the new release of Apple Podcasts with two new free channels: the ‘Radio 24’ channel, in where it is possible to discover all the podcasts of the Radio 24 programs, enriched day by day and with some successful cases such as ‘La Zanzara’ by Giuseppe Cruciani which for years has been in the top positions of the podcast rankings on the main audio platforms, and the ‘Radio 24 Original Podcast’ channel, where Radio 24, the first radio station to produce original Podcasts, offers users all the original productions characterized by editorial richness, transversal themes and narrative capacity, such as the most recent ‘La Variante Parenzo ‘by David Parenzo, the interviews by Pierluigi Pardo in’ Talk to Pardo ‘, the stories of sports champions and companies that support projects aimed at protecting nature and the environment and in ‘Olympia-Sport For Nature’ by Dario Ricci and the second season of the lucky podcasts on the world of the TV series ‘Ancora una, then quit’ by Marta Cagnola.

For the 24 ORE Group, the presence with 4 channels on the new Apple Podcasts Subscriptions marketplace since its debut represents a confirmation in continuing to invest in digital innovation on the audio content front with both free and pay products in the name of in-depth analysis and verticality and with audio on demand formats, in a logic of audience enlargement.