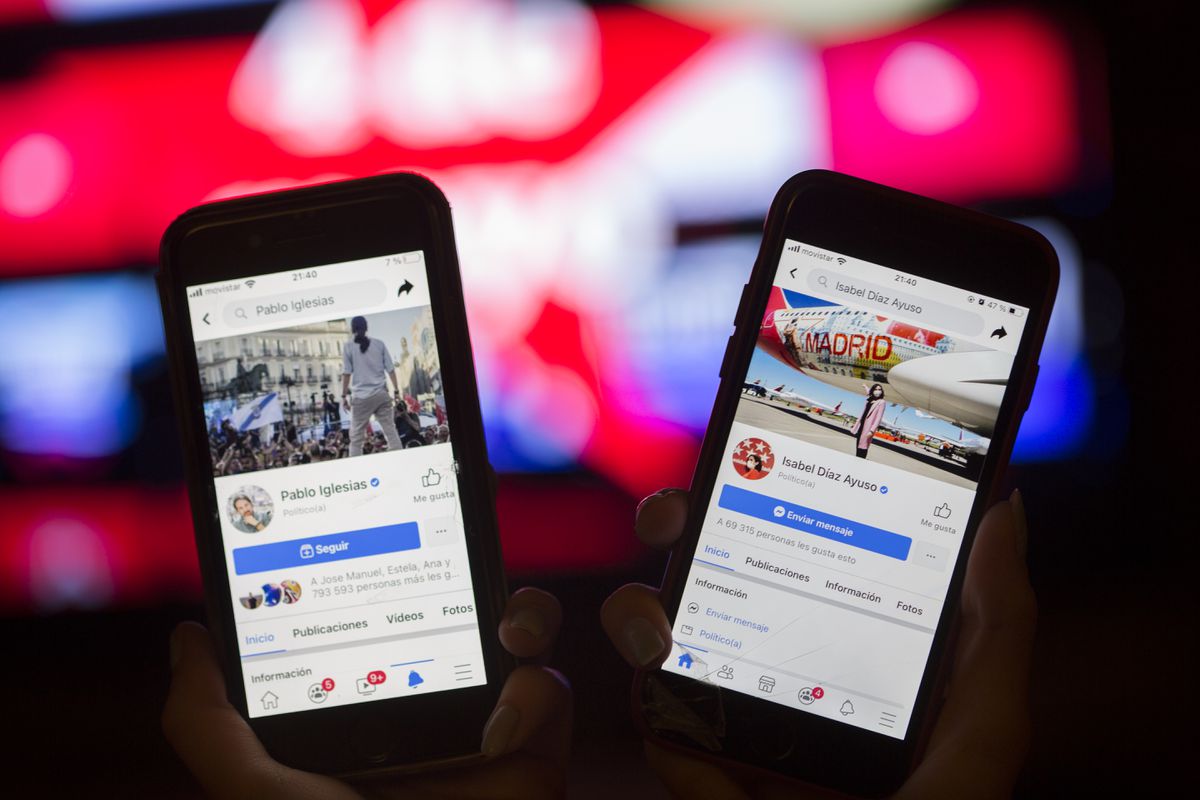 Uninformed Facebook users in Spain might think that the only possible choice in the Community of Madrid is between regional president Isabel Díaz Ayuso and former vice president Pablo Iglesias. Nine out of ten mentions on the social network about the six main candidates for the elections on May 4 in the last year and a half are about one or the other. The difference in the number of interactions has been maintained since the call for elections, although the rest of the candidates have slightly increased their presence on the web. There is another substantial difference, especially in the case of Ayuso: most of the posts on Facebook about the president have been made by left-wing pages. Much of his fame comes from his political or ideological adversaries.

THE COUNTRY has analyzed nearly 400,000 posts on the six candidates for the presidency of the Madrid community since January 2020 thanks to the Crowdtangle tool, owned by Facebook. Those offered by this tool are from pages, verified profiles and groups with thousands of users, so that no viral messages from anonymous users appear. The number of interactions is the shared messages, comments and I like or other reactions, but not the clicks that are generated. To understand the impact of this content, the videos created by these pages have been viewed 376 million times even though they only represent 10% of the publications.

Ayuso’s surprise announcement of the elections and the participation of Pablo Iglesias shot both candidates, but their advantage in the network was already extraordinary. Both have been a central claim of Spanish political activity on Facebook during these months. Only Pedro Sánchez surpasses them, and just barely. The president of Vox, Santiago Abascal, is the only one who approaches them, well ahead of Pablo Casado, leader of the opposition.

“There is no concrete line against Ayuso. It is casual, but the news is also throwing it up and we are publishing what people like to read in Spanish Revolution ”, says one of the left-wing activists behind the Facebook page, which has 3.2 million followers, was born as of 15M in 2011 and has no ties to any specific party.

The first page not linked to the media favorable to Ayuso occupies position 13. It is about the group called Madrid with Isabel Díaz Ayuso, managed by employees of the Popular Party and with more than 35,000 members, although they publish much more often than the media and others. pages. That group was created in 2018 with the name Madrid with Pablo Casado and in January 2019 it was renamed for the regional elections. Then the group Todos con Isabel Díaz Ayuso also appeared, which today has 22,000 members.

In the case of Pablo Iglesias, the mentions of his supporters and detractors are more balanced. His party, Podemos, is much stronger on Facebook and it is the second page that has the most interactions about Iglesias. The other three are the means Okdiario Y The world and the Vox party. Only Okdiario has almost 4 million interactions in messages about Iglesias.

The rest of the candidates compete in another league. The head of the Vox list, Rocío Monasterio appears in about 4% of the post (about 13,000), but it generates only 3% of the interactions. In recent weeks his impact has grown driven by his party, more active than the rest. Mónica García, Edmundo Bal and Ángel Gabilondo do not reach 7,000 publications. An example of the less political attention that these candidates generate on Facebook is that one of the messages with the most interactions from the socialist candidate, Ángel Gabilondo, is one where you can download a book by the philosopher Michel Foucault that the professor of Metaphysics translated and prefaced.

The weight of a candidate on Facebook is obviously not decisive for their chances of winning, but it can be substantial in the perception of many citizens. With 44%, Facebook is the social network that most Spaniards use for information (more than double that of Twitter) and a total of 69% uses it for any purpose, according to data from the Reuters Institute. “It is clear that the penetration of Facebook in society has significant implications for political life,” says Sílvia Majó-Vázquez, a researcher at the University of Oxford. “When people come to political information on Facebook they tend to have different concerns than the general population. Getting informed on Facebook is associated with citizens having problems that are far from the central ones in public opinion ”, adds Majó, who analyzed this hypothesis in Spain in a scientific article from 2018.

How does it affect that the popularization of a political figure is carried out by rivals? It is not ideal, but there are worse things. “Even if it is through hatred, making them so visible makes them more viable as candidates and ends up being considered more attractive, not among those who hate them but among those who might prefer other candidates,” says Berta Barbet, a researcher at the Autonomous University of Barcelona.

The most effective type of publication among those who mention these politicians is undoubtedly the short video in zasca format: “This is how Santiago Abascal has uncovered the lies of the #Government“,” What a review Pablo Iglesias gives the VOX deputy “,” Another day Mónica García. Putting the red face to the privatization of the health in Madrid “,” Javier Aroca slams Ayuso and the politicians jetas “,” Mónica, manager of a restaurant in Madrid, sends a message to Pablo Iglesias “. The goal of most of these messages is to appeal to the emotions.

That is why it is also common to see how reactions to videos or content change when they are published from pages related or contrary to the candidate. When content about Ayuso, for example, is published by right-wing pages, the proportion of I like or I’m lovin ‘it it is greater than when left pages do. The opposite happens with the reactions of laughter or sadness that abound more in the messages of opposite pages.

“There are people who exploit to go out at any cost. I don’t know what they play at. It is a harmful system. Any of us as a society should think about where we want to go, to a place where a calm discourse cannot be made? ”, Says Helena Matute, professor at the University of Deusto.

To understand how interaction and emotional charge work on Facebook, since January 2020 of the 14 posts with more interactions on Pedro Sánchez, 12 are from Vox or Santiago Abascal. The other two are also from critical pages, that of popular politician Javier Maroto and that of a page called El Periodista Camorrista. Vox is the only party whose profiles consistently achieve a lot of organic interaction. For the rest, there are always pages of supporters or related who manage to surpass the original. The 3.2 million followers of Spanish Revolution are more than double that of the Podemos page. Even in the PSOE, fan pages such as “With Pedro Sánchez another better Spain and a renewed PSOE is possible” or “Pedro Sánchez president” achieve more interactions, which tend to have more impact than the official party.