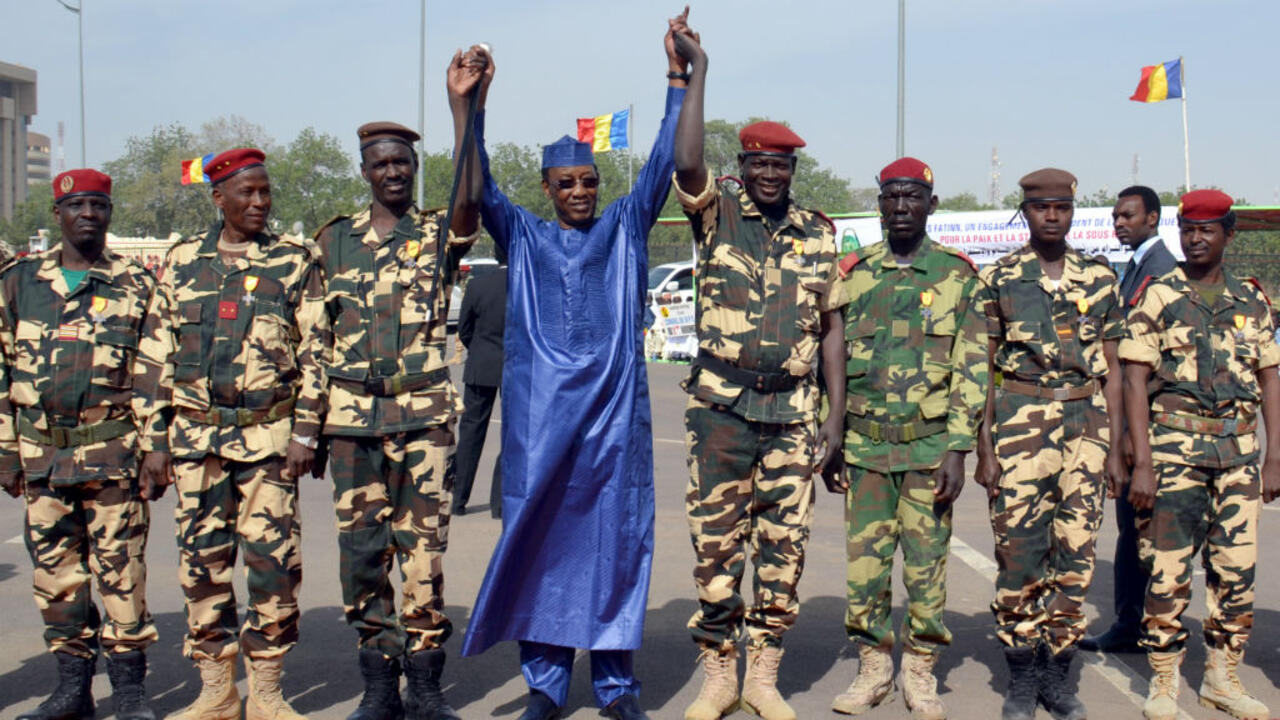 At the head of Chad since 1990, President Idriss Déby Itno died of injuries he received during a fight against the rebels. Disreputed in his country, the head of state had managed to win the trust of Westerners by placing himself at the forefront of the fight against terrorism. Profile.

He changed his kaftan for a blue silk cape embroidered with oak leaves with gold thread, “marshal’s” staff in hand. It is about August 11, 2020, during a ceremony in which he was elevated to the rank of “Marshal of Chad.” Idriss Déby Itno died on Tuesday, April 20, from wounds received on the battlefield against a division of rebels infiltrated in the north, coming from their back bases in Libya, the Army announced on state television on Tuesday. following the declaration of his re-election for a sixth term to head the country, after the presidential elections of April 11.

This son of a humble rancher, a career military man and a rebel fighter, took power in a coup in 1990. He did not stop presenting himself as a “warrior”. It was this image, carved from his first steps with Hissène Habré -who came to power in 1982-, to the uniform that he continued to use voluntarily in recent years, which meant almost unanimous support from the international community, to despite having a highly criticized balance in terms of human rights.

In the bosom of power, Idriss Déby reigned willingly with “intimidation” and nepotism, according to his detractors.

He appointed members of his family or close people to key positions in the Army, in the state or economic apparatus, and he never let the rest remain in their positions for long. 17 prime ministers succeeded each other between 1991 and 2018, before Idriss Déby abolished that function to seize all the prerogatives of the Executive.

“Everything is centralized in the Presidency, he uses all the weapons of absolute power brutalizing society”, declares Roland Marchal, researcher at the Center for International Research (Ceri) of Sciences Po Paris.

At the head of the anti-terrorist fight

Often criticized at home, Idriss Déby had the confidence of his African and Western allies. The man who secured the presidency of the African Union (AU) in 2016 has gained a prominent place in recent years by positioning his powerful army at the forefront of the fight against terrorism.

In the front line alongside French soldiers, his troops set out to assault jihadists in northern Mali in 2013, then intervened in Central Africa in 2014 before withdrawing after being accused of exactions. On the front lines of the fight against Boko Haram, the Chadian Army in early 2015 launched a broad offensive in Cameroon, Nigeria and Niger against the armed Islamists of the Nigerian sect that Idriss Déby described as a “horde of fanatics and drug addicts.”

This longstanding hatred for jihadists was in fact a character trait of this Muslim “Sahel gendarme” in a country where Christians make up more than a third of the population. When it came to international mobilization against terrorist groups, his interventions earned him solid support among Westerners, particularly in France, a former colonial power and long-time ally.

But in N’Djamena, this immense endorsement worried more than one. Since 2014, the leader of the ranks of the opposition, Saleh Kebzabo, an unfortunate candidate with 12.8% of the vote, asked “strongly Chad’s economic allies, in particular France, to be more demanding with economic governance, respect of human rights ”, in the face of a“ regime that has cornered the population to a growing impoverishment and that is distinguished by the State’s asset management ”.

An illustration of the fatigue and social unrest among a part of the population, some -prohibited- demonstrations by civil society asked him not to appear again during the April 11 presidential elections. Although Idriss Déby allowed some of his opponents to express themselves relatively freely, his troops were careful to ensure that criticism did not gain ground, carrying out targeted arrests and banning any political agglomeration.

A destiny tied to that of Habré

For the Chadian head of state, life was a succession of battles. Born in 1952 in Berdoba (northwest) into a Zaghawa family, a branch of the Gorane group, present on both sides of the border between Chad and Sudan, has dedicated himself to the trade of arms from a young age. With a Baccalauréat diploma, he entered the officers’ school in N’Djamena, then obtained his pilot’s title in France.

Back in the country, he tied his destiny to that of Hissène Habré -convicted in 2016 for crimes against humanity- who took power in 1982. Commander-in-chief of the armies, Idriss Déby will see his aura grow with the war of “reconquest” that allows Chad to retake the North occupied by the Lebanese. Military adviser to the president, accused of conspiracy in 1989, flees to Libya and then to Sudan. He constituted his own army: the Patriotic Salvation Movement (MPS).

In December 1990, his troops take N’Djamena. Once in power, he opens the country to multipartism. Elected in 1996 and re-elected since then, he is criticized by an opposition that criticizes him for electoral fraud, human rights violations and, despite his 2003 entry into the club of oil-producing countries, the extreme poverty of the Chadian population.

It was thanks to the Army that this soldier established his power. Made up essentially of officers from his Zaghawa ethnic group and led by their close associates, it is considered one of the best armies in the region.

But in recent months, the Zaghawas’ unit fractured again, and the head of state had to remove some “suspicious” officers, according to those close to the Palace.

At the end of the 2000s, that unit had been seriously affected, with some Zaghawas going to the side of the rebellion, in particular Timan Erdimi: a nephew that Idriss Déby caught in 2008 leading a rebel coalition that failed, at the gates of the presidential palace. in N’Djamena, trying to overthrow the president.

Being of military origin, France then proposed to the president to evacuate it. He refused, vowing to maintain power or die with weapons in hand.

That attack is one of the shadows in the long journey of the president-soldier: amid the confusion after the combat, one of the main opponents, Ibni Oumar Mahamat Saleh was arrested by the security forces. Declared “disappeared”, he was later presumed dead.

A new rebel offensive very threatening to power is launched in 2019, but is stopped far from N’Djamena by decisive bombardments from French fighter jets. In the end, keeping his country badly than good, surrounded by states as failed as Libya, Central Africa or Sudan, Idriss Déby emerges as the stabilizing element of a tormented region.

But the country pays a high price for fighting the jihadists. The Nigerian group Boko Haram multiplies the devastating attacks around Lake Chad, forcing Idriss Déby to put on his uniform again to carry out himself – at least in front of the media – a counter-offensive to Nigerian territory in March and April 2020 .

The “weighty friend of France” and of the Westerners, as many experts in the region describe him, he knew how to become indispensable to them in the fight against the jihadists.