Ice Hockey World Championships | In the race stand of the Käpylä-based inventor, the sofa changed to a bike: Spectators tread the power on a 65-inch telly 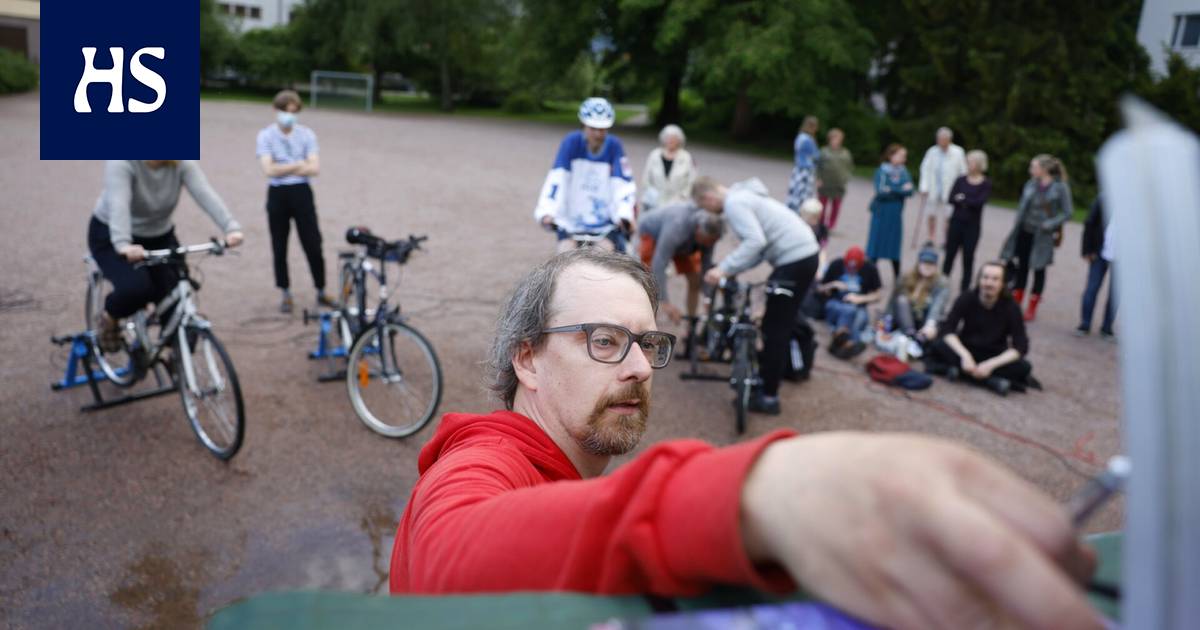 This is not the first rapture that has taken place in the neighborhood: both igloos and pole sleds have become familiar in the past.

When the pinball man inventor Janne Käpylehto decide to watch hockey, it really isn’t done on the living room couch.

In his own words, Käpylehto is not enthusiastic about motorsports, golf, football or hockey at all. But whenever Finland plays for gold, it is an exceptional situation.

“Even then, however, it cannot be done with traditional expenses,” Käpylehto points out.

Traditional spending is not the case at the World Cup either. Käpylehto and his neighbors have built a race stand in the middle of Käpylä, on the field of Onnenpuisto, which produces the energy required by television itself.

Electric a 65-inch television hung on the field’s football goal is created by the power of four bicycles. The bicycles are attached to generators that convert kinetic energy into the electric current required by the television.

“In principle, the energy of one bike is enough, but then you can tread quite seriously,” Käpylehto says.

Käpylehto names three reasons for the exceptional way to watch tonight’s hockey game. The first is a local community of residents who can get excited about even more special ideas.

“It’s nice to do stuff like that here. People got so excited that they brought their own bikes here. ”

Another reason is to illustrate the birth of energy. According to Käpylehto, who works in the energy sector for his day jobs, making electricity in this way becomes fun, concrete and inclusive, which also makes children excited.

Third, on the back of the bike, bench sports turn into an unnoticed active sport.

At least the last statement is also signed by the person sitting on the back of the bike Annukka Valkeapää.

“Yes, I too can get excited about hockey when I get to participate!”

Valkeapää, who has known Käpylehto since twenty years ago, says that he is enthusiastic about the idea as soon as he hears about it, although hockey is usually not one of the biggest interests.

On the same lines is another neighbor of Käpylehto, Tuomas Waris.

“The idea sounded so endless that I had to go along.”

This is not the first rapture that has taken place in the neighborhood. According to Waris, it is customary to organize celebrations of all kinds in the summer and various construction projects have been carried out in the winter.

“For example, an igloo and a pole sled have been built,” he says.

“There’s a really active gang here and everyone knows each other, but Janne has definitely brought extra speed to the going,” Waris praises.

Always when the cone arranges something like this, there is a small amount of tension involved as to whether everything is working as planned. Even now, the first minutes of the Finland-Canada match had already passed, before the broadcast was shown with the change of television.

“Technical adjustment is always done by volunteering. Such missteps are relevant! ”

This time the broadcast was made to run just right before Finland’s first goal.

“Finland is now being trampled to victory here, yes this will be a great match,” Käpylehto celebrated after the first goal.