“I know that there will be signings, but I would like to have them now” 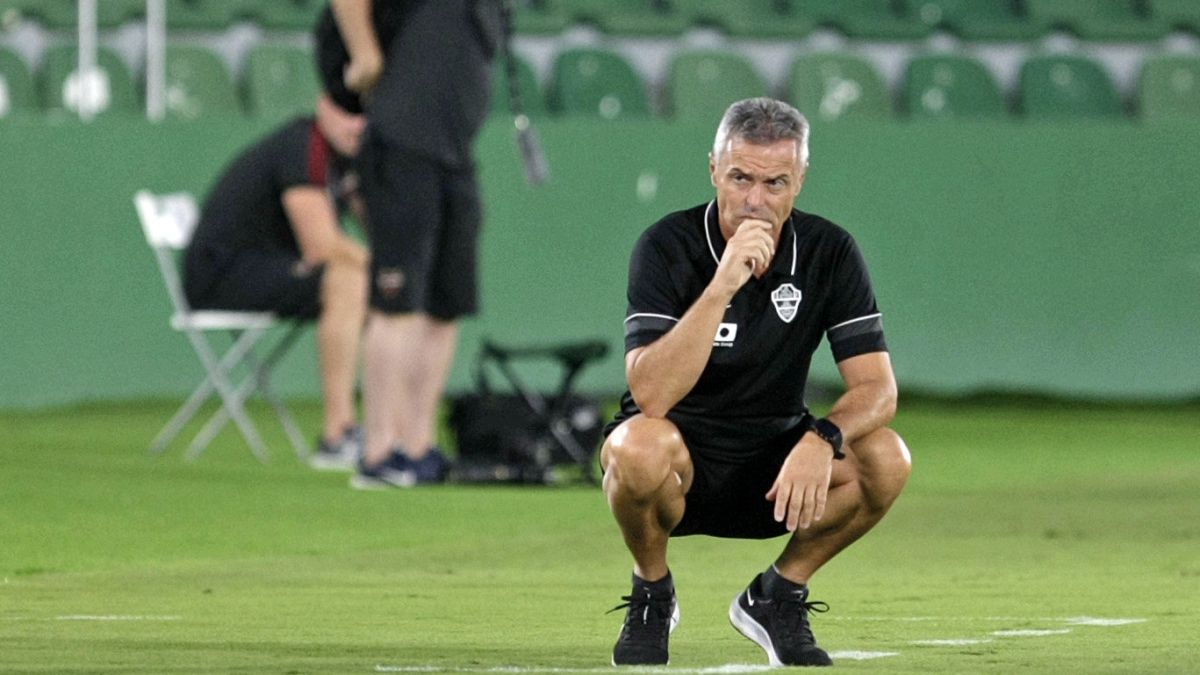 Conclusions of the Festa d’Elx: “A bit of everything. The team did things well and in the first half had good chances to score. In the second, they made changes and we hardly had people to refresh. We have few spaces and less ball; I don’t like to lose. , less in our Trophy, and I know that there are things to improve “.

Only five signings, counting Mojica: “We need more players. The sports director (Nico Rodríguez) spoke of eight or ten signings at a press conference and only five have arrived, which leaves us three or five pending reinforcements as we would like. I know that it is a complicated market and that we are a team with limitations due to the reinforcements to which we can aspire. I would like to have more footballers and, nine days before the League begins, possibly one more will arrive this week, but it is not the same as doing the preseason with everyone “.

Disadvantage for how the template is: “Yes, of course it is. Even if the signings that are going to arrive are good and they adapt soon, capturing the concepts we handle well, it will be more difficult. For a coach it is better to work from the beginning and not with these difficulties. I hope that we bring in those smart players who make us better to be more competitive, organized and with real options to be at that limit to fight with rivals like Levante, who are now better. With these additions we could be closer to other rivals. “

Positions to be filled: “With Antonio Barragán and Mojica, the back is complete. The goalkeepers, both very well. The midfield is very depopulated. Levante has left out level people and we have only been able to put John in the center, no tour in First Division. It is no secret and I do not reveal anything. I trust the reinforcements that will improve us in any position. The league is too long to face it like this. “

How they get to the first day: “Fair, it is evident. We cannot say that we arrived perfectly with the people that there are. Right now we do not have even five professional changes. Against Athletic we will recover Carrillo and Piatti, if we do not take risks. There are few variants, to this day. And those that exist are in defense, where less changes are made. “

Bragarnik plans: “We talk every day. The concern is of all levels. I would be uneasy or worried if we closed the squad. I know that there are going to be signings, but I wish they had been here already. I am up to date with the club and speak to daily with the sports director and with Bragarnik. Players have fallen along the way, but we are in time to talk to others. “

Equipment level: “I am convinced that we are going to progress with the squad. The back part is already improving us, but forward we have them and we have lost some. With 17 players they do not complete a call of those before. The previous campaign there was Little time and the planning was as it was and it gave us to save ourselves very fair. With 17 players we cannot compete “.

Marcone and Carrillo: “They are my players and I have no information that they are going to leave. Levante, for example, has excellent footballers to spare. If options are given, we will see. With Marcone and Guti we have no other variants. We have tried with Fidel on the inside, but there is nothing else. We are looking at that site because we have an important hole and we need two signings. “

All teams in a similar situation: “It is not a consolation. I want the furniture and paint to be good in my house. We are going to play against Athletic, with a full squad and a great subsidiary. What am I going to say about Atlético, even if footballers come or go. And then Sevilla will arrive. Although we strengthen ourselves well, we must be aware of our reality, which is very far from the rest. Our limitations are evident. We are fine because the group is good, but in a competition as long as ours it is not sustainable. “

Morlanes: “I cannot name names because it is not my function. In many positions we have contacts with players who are even free. We see all the options and there they are. Some player will arrive during this week. At Celta, we signed Rafinha in the second or third week of competition, and before it was impossible. We’ll see what the market has in store for us. “