“I had a couple of days where I had nothing, it was ugly” 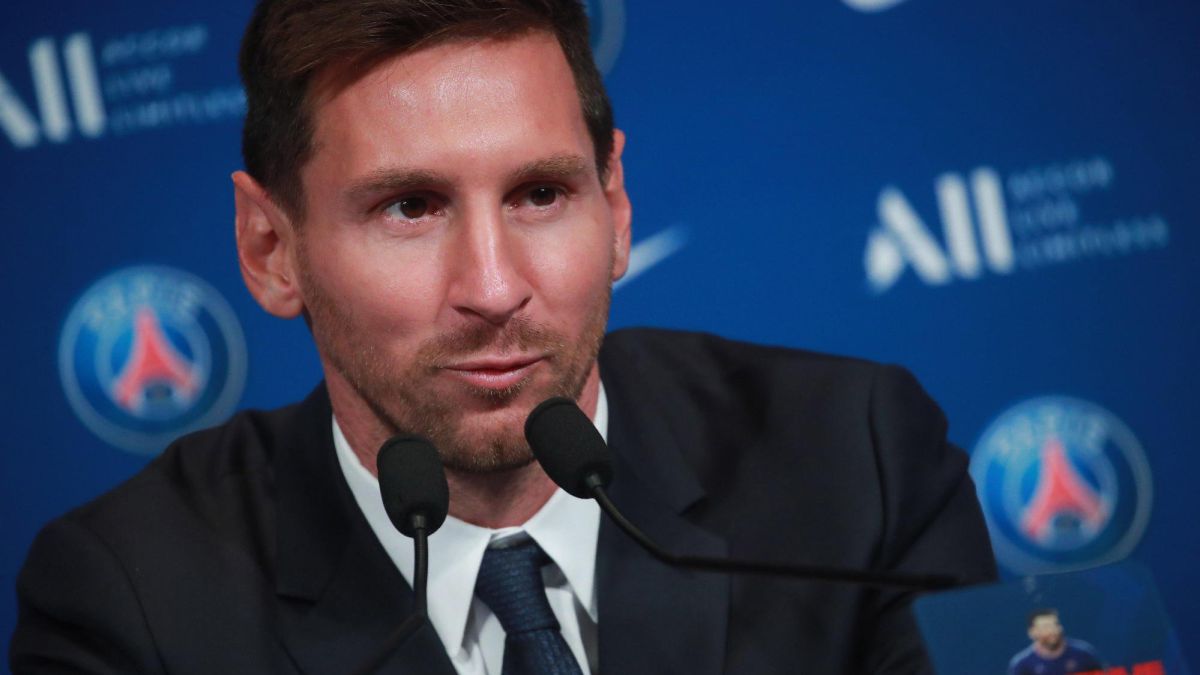 Leo Messi is a new Paris Saint-Germain player. The Argentine winger arrived in Paris on Tuesday and was presented on Wednesday as a new player for the French team. Together with Nasser Al Khelaifi, president of the club, Leo Messi appeared in the press room of the Parc des Princes.

The first to start his speech was the president of the Parisian club. “Good morning everyone. I will speak in English so that you understand us too. I am very happy to introduce Leo Messi as a player for Paris Saint-Germain. It is a historic day for football, for the club. It is fantastic for us. The world knows who Leo is, the only one to win six Ballons d’Or. Leo has magic and is a winner. It is exciting for all the fans and all the fans in the world. 10 years ago we told you that we had a lot of ambition and we are very proud of what we have achieved today. Leo I would like to thank you for your work to achieve it. Leonardo, Jean Claude, I am very proud of you. I’m skipping the whole speech. Also to the communication people and all those who are behind. Also to our business partners for believing in our project. Today is an exciting day, but we haven’t won anything yet. This is the beginning. We have someone who has won a lot and who will bring more trophies with our fantastic team. I want to thank Leo for joining. I see your children very happy in Paris and I hope they are happy, “the president once assured.

Leo Messi also wanted to start with a speech of thanks. “To be grateful for the words of the president. I am very happy. Everyone knows my departure from Barcelona, ​​which was very hard, it’s been many years and change is difficult. As soon as you get here, happiness is enormous. With much desire, excited, I want this to happen quickly, although I am enjoying it with my people, but I want to start training. I can’t stand the urge to meet my teammates, the coaching staff and start this new stage. I want to thank the president, Leonardo, the whole club for how they treated me since the Barcelona statement came out. How quickly they were made available. I want to thank the deal. I am happy, I am looking forward to it, I have the intact illusion of winning to keep winning. This is an ambitious club and I think we are ready to try to achieve everything and that is my goal. Keep growing and winning and that’s why I come here. Hopefully we can get it. I want to thank the people of Paris, my arrival was crazy. If something else was needed, it was to finish rounding everything up. The reception … We are going to enjoy a lot and we are going to fight for the objectives. Thank you all again and thank you for being here and let everything just start, “the Argentine explained in his longest speech.

Then question time began. These were Leo Messi’s responses to the press present at the Paris Saint-Germain stadium.

Play with this template: “It is crazy to be able to share the day to day with this squad. There are spectacular signings apart from what there was. I’m going to train with the best and it’s nice”

When will it debut: “I do not know. I come on vacation. More than a month unemployed. Yesterday I saw the coach. I do not know … I will have to do a preseason alone, train well and when I am ready to start playing. I really want to, but I can not say a date. As I train and when the coach decides that it is the moment, we will be there with a lot of desire “

Sadness: “Everything that happened to me is what you defined. Hard and fast. It was exciting with everything I had to live that is not left behind from one day to the next. We have a new life. We are very happy to be here. I went through many feelings and we assimilated them little by little. We assimilated it as each one could “

Fans darling: “I was in Barcelona without having started conversations. People left without me traveling. After a long time without seeing each other, we are going to enjoy it a lot. I hope it will be an extraordinary year for them and us.”

Win the Champions: “Paris was close to the Champions League but it is difficult. There is a united group, but it takes a bit of luck. The best does not always win, it has happened that the best sometimes did not win the Champions League. It is a special competition and that is it. It makes it so beautiful, so important. That everyone loves it “

Messi on the Champions: “I come to a team practically done. As I said I was very close to winning. I come to help, with great enthusiasm, with more desire than ever. My dream is to raise another Champions League and I fell to the ideal place to have more chance and be able to achieve it “

Importance of Neymar: “I have friendly people in the dressing room. You get excited and see that you can get what you want. Both Paris and I were looking for the same thing while being apart. Now together we hope that we can get it. In addition to Ney, Di María, Paredes … That did a lot to choose this place “

French league: “I followed the championship because I have friends at PSG. I followed their games, the French league … It grew because of everything that Paris helped, the movements it made. This makes the League competitive and the teams strengthen each other to beat PSG, La Liga. Now there are new opponents, new stadiums … It’s going to be new “

Message to the Barcelona members: “Before I left without knowing where I was going, I told the fans, I will always be grateful. It was many years. They knew that I was going to come to a strong team and that I was going to fight in the Champions League. They know me. I want to continue achieving goals. I had no doubts that Paris has the same goals of continuing to be bigger. I don’t know if we’re going to face each other. On the one hand, it will be nice to go back to Barcelona. Hopefully it will be with people when possible. On the other hand, it would be very rare to play at my house with another shirt. It’s football, it can happen, we’ll see. “

On leaving the comfort zone: “I grew a lot since Newell’s. Many years and many experiences have passed. I can say that I have the same illusion as when I was a baby. I love to play and win. I will give everything to achieve the objectives”

Messi on the coaching staff: “We spoke with Pochettino. I have known him for a long time. That we are both Argentines makes things easier. Obviously we talked and everything was very good from the beginning. As I said, the coaching staff and the squad did a lot for me to choose this club”

Playing with Verratti, Barcelona’s old goal: “Verratti has been showing that he is one of the top. At Barcelona he was loved a lot and for many years. Today we have to make it the other way around, that I come here to play with him. It is a phenomenon. I got to know him and he is a spectacular boy. All the costumes are the best in the world. They have a great squad and I can help and do my part to achieve the desired goal “

Change in your career and city: “It is a challenge. When I spoke with Leonardo I only told him that I hope my family is well, that he can adapt quickly. For me it is new. I am prepared and I am looking forward to it. Football is the same everywhere. I have friends in the locker room. It will be easy to get used to quickly. I come happy and wanting to train, to meet my teammates, to have contact with them and be able to play and start. Everything is new for us but I am prepared at a sporting and family level, it will be a beautiful experience. We are going to enjoy a spectacular city. We are calm and happy “

From the Parque de los Príncipes, Leo Messi gave an interview to ESPN as soon as he was presented with PSG.

Departure from Barcelona and arrival at PSG: “At first, everything I lived in Barcelona was very hard. They were very difficult days. Then, I had a couple of days where I had nothing, we were talking. There was nervousness, the desire to start, start. Training alone and in that situation. It was. ugly, strange. Later, when everything was done, they talked and reached the final agreement. Everything was changing. Without being able to overcome the above, but moving forward and looking forward. With much desire and great enthusiasm for my new stage “

Family support: “It was hard for everyone. In principle, Antonela accompanies me wherever. Although I was bad from the first moment, she banked me and supported me. The kids with the city, with Disney, with Paris, the tower … For Thiago it was more difficult that is bigger and the one that understands more “

Reasons to sign: “I have friends. I know most of the people. You see a healthy, united group. This means that I have made this decision. Also the Argentine coaching staff. It was not better than here anywhere. It is a squad made to fight. for the Champions League, which is the goal that I also have on a personal level. Doing it here would be extraordinary for everyone. They were close and hopefully this is it. “

Rai, Katia Serra to ISP: “Italy can win the European Championship but must alternate the pace”

‘Rich face’, boom of boys from the aesthetic doctor to look like VIPs