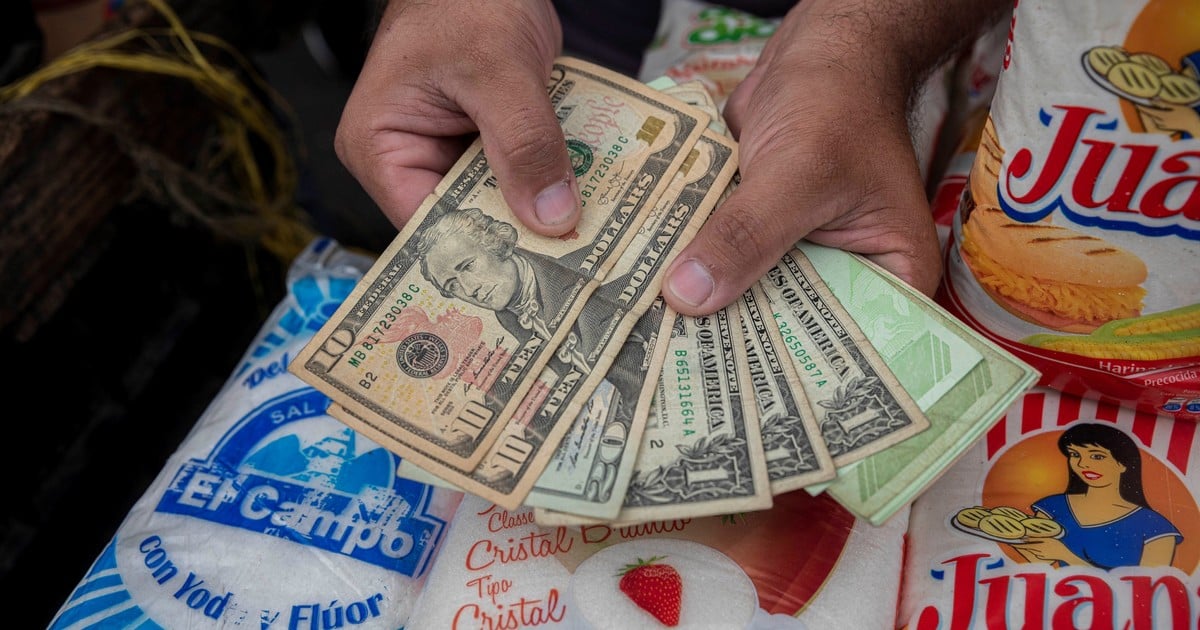 A boy packs purchases and takes them to customers’ cars in a supermarket in Caracas. Most tip with cornmeal, grain, or canned food. “I don’t have cash,” they tell him.

They pay you with food because it is practically impossible to tip with bolivar bills, the currency of Venezuela, pulverized by the hyperinflation and now actually replaced by the dollar.

The circulation of the green bill, a symbol of “US imperialism” considered an enemy of the “Bolivarian revolution”, began to become widespread in 2019 and the government of Nicolás Maduro had to turn a blind eye and accept its use, increasingly normalized.

From street vendors to formal merchants they handle dollars, something curious in this country hit by United States sanctions, as part of the strategy led by opposition leader Juan Guaidó to pressure Maduro’s departure from power.

Washington ignores Maduro after considering that the 2018 elections in which he obtained re-election were “fraudulent.”

The 2020 parliamentarians, in which Chavismo swept away in the face of the opposition boycott, were also not recognized by the United States and the European Union.

What the Maduro government says

“It is very paradoxical,” admitted Foreign Minister Jorge Arreaza in a recent interview with AFP.

“But we cannot forget that we are in the geopolitical area of ​​control of the United States” and that “it is the main trading partner of all our countries” in Latin America.

“Faced with the blockade, we had to relax, we learned with the people who began to use the dollar (…), we had to accept this reality and facilitate the process,” he justified.

The president of Venezuela, Nicolás Maduro, despite his anti-imperialist discourse, defends dollarization in the country. Photo: REUTERS

The dollar thus became the dominant currency in the former oil power.

Liquidity in bolivars is about 466 million, equivalent to about 18 dollars per inhabitant, highlights the economist Asdrúbal Oliveros, based on a study by his firm Econoanalítica.

“It is nothing for a national currency”, when “liquidity in dollars is 2,300 million, almost five times more.”

A man pays for a bus ticket: part in dollars and part in bolivars. Photo: EFE

“The bolivar has a structural problem of trust,” explains Aristimuño. “It is society in general that wants the dollarization processes of the economy to accelerate,” he adds.

Hyperinflation, which in 2018 was 400,000%, according to private firms, while the government placed it at 130,060%, unleashed a great shortage: basic necessities disappeared from the shelves and imports stopped.

The crisis wiped out the purchasing power of the Venezuelan. The first victims were the poorest, but also the middle class, which today “is almost non-existent,” Oliveros stressed.

With dollarization, he adds, “you went from a problem where the difficulty was the availability of the product to a problem of demand.” Because, he explains, “the product is there but there is such an impoverished population, with a very small and limited purchasing power.”

A wad of bolivars is barely enough to pay for public transport in Venezuela. Photo: AFP

The bolivar, pulverized by hyperinflation

With rare exceptions, the bolivars in cash were left only to pay for public transportation. The Central Bank recently issued three new banknotes. The maximum denomination, 1 million bolivars, does not represent even 50 cents.

People handle themselves in businesses with a debit card or bank transfer if they want to pay in bolivars. Electronic payment is also used to complete “green” purchases. That is, if the account gives $ 50.75, people can pay with a 50 bill and the equivalent of 0.75 in bolivars.

Oliveros maintains that with dollarization, Maduro “has shown a certain pragmatism.” “This strategy allowed them to relieve internal tension and have more power retention capacity.”

The economist maintains that it is “an escape valve”, something on which Maduro himself agrees.

“It is not ideal and will be temporary,” says Arreaza. “How long will it last? One, two, three, four years? Our goal is to reposition the bolivar. One thing is that trade is dollarized and another that we are ducking in front of the Federal Reserve (the US central bank) asking them for dollars.” .

But Aristimuño assures that without “measures that really help to overcome inflation and recover the productive capacity of the economy, it is unthinkable that the bolivar would have any efficiency.”

Luis Miguel, The series season 2: who's who in the second part of the story