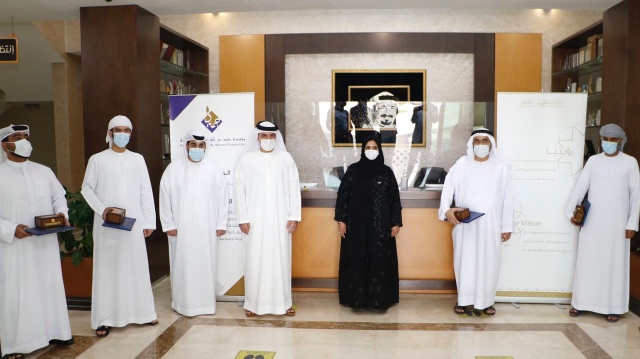 The Humaid Bin Rashid Al Nuaimi Charitable Foundation distributed “10 housing”, which His Highness Sheikh Humaid bin Rashid Al Nuaimi, Member of the Supreme Council and Ruler of Ajman, has directed to distribute it to 10 eligible Emirati families from the Emirate of Ajman, in addition to providing electrical appliances and furniture in each dwelling in addition to the materials Food for each of them.

The Director General of the Humaid Bin Rashid Al Nuaimi Charitable Foundation, Sheikha Azza bint Abdullah Al Nuaimi, handed over the housing units to the families at the Foundation’s headquarters in the presence of a delegation from the Municipality and Planning Department in Ajman. The emirate of Ajman, and the residence consists of two floors “ground and first” and a fence, in addition to a car park.

She indicated that this initiative comes with the support of His Highness Sheikh Humaid bin Rashid Al Nuaimi, Member of the Supreme Council and Ruler of Ajman, and the directives of His Highness Sheikh Ammar bin Humaid Al Nuaimi, Chairman of the Executive Council, Crown Prince of Ajman, to provide a decent life for citizens and their great interest in achieving happiness and well-being for them.

The Director General of the Foundation affirmed that providing adequate housing for the citizen will support family stability and social cohesion, which will reflect positively on the general climate, noting that there are a number of other projects developed by the Hamid bin Rashid Al Nuaimi Charitable Foundation as part of its plan to implement during the coming period, as cooperation and communication took place. With the Municipality and Planning Department in Ajman to ensure that this category of citizens is entitled and do not own homes in their names.

In turn, the owners of the new homes expressed their thanks and appreciation to His Highness the Ruler of Ajman for the distinguished initiative after receiving the housing, noting that His Highness’s generosity comes as an extension of the continuous initiatives in the humanitarian and development fields in general, so that the Emirate of Ajman and the UAE in general remain the homeland that embraces everyone and a safe haven To all of his children.

They emphasized that this honor embodies the meanings of solidarity and cohesion of the leadership with society, and touches them to its necessary needs on a permanent and continuous basis, as the leadership of the state pays great attention to citizens and residents and provides them with everything that could contribute to achieving their well-being and happiness.