Huesca, a stimulus to add

The Albinegra squad stretches their legs, before starting this week’s training at the Cartagonova stadium. / JM RODRÍGUEZ / AGM

Cartagena makes its first visit of this season to El Alcoraz, with the loss of Bodiger and the aim of releasing the points locker

The first trip of the season brings Cartagena a stop at the El Alcoraz stadium. There, Luis Carrión’s team wants to premiere tonight, starting at 10 pm, their scoreboard in the standings. It is the second day and the calendar is far from sewing and singing, but the Albinegros will have to show a firmer, more precise and balanced image than that offered in the improvable premiere on Monday against Almería (1-3).

Surely Efesé will try, especially knowing Carrión’s background. With him on the bench, the team never linked two days in a row with alarming sensations. His boys always offered another face, beyond what could happen in the result. Monday’s mistakes cannot be repeated. The players know it, and the Catalan coach has insisted on it.

Measuring a great like Huesca is always a stimulus. Last season it already worked to stand up and even knock down heavyweights like Sporting, Espanyol and Girona. The Huesca team has just dropped from the First Division and everything that is added will already be a good treasure for Cartagena.

The team led by the Mexican Nacho Ambriz has a wallet. And it also preserves pillars that not long ago were fighting to avoid relegation to Second against Atlético, Valencia, Real Madrid, Barcelona and other ocean liners. Examples of this are goalkeeper Andrés Fernández, center-back Jorge Pulido, winger David Ferreiro and midfielders Jaime Seoane and Mikel Rico, all of them with plenty of chances to repeat ownership tonight. They were already important in the victory against Eibar, on the first day.

Cartagena arrives at the appointment lacking at least one center-back and one more extreme, to close in the final stretch of the market. In addition, Carrión has summoned four homegrown players (Sergio Díaz, Edu, Neskes and Uri) and has the withdrawal of Bodiger due to physical discomfort. With De Blasis there are no deadlines.

Ambriz: «We need to play a perfect match to win» 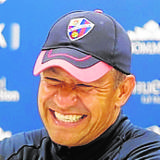 Huesca coach, Mexican Nacho Ambriz, yesterday preferred to be cautious and not trust Efesé. “I’m worried about everything about Cartagena and he’s going to come with the knife between his teeth. It will look for us to make mistakes, they make quick transitions. We need to make a perfect match, “he said bluntly, adding:” They are going to play their cards and hopefully we get that good result. The capacity of El Alcoraz is 9,200 spectators, but this night the capacity restrictions will allow the entrance to 3,600 people. Excluding companions and the VIP box are 3,100 subscribers.