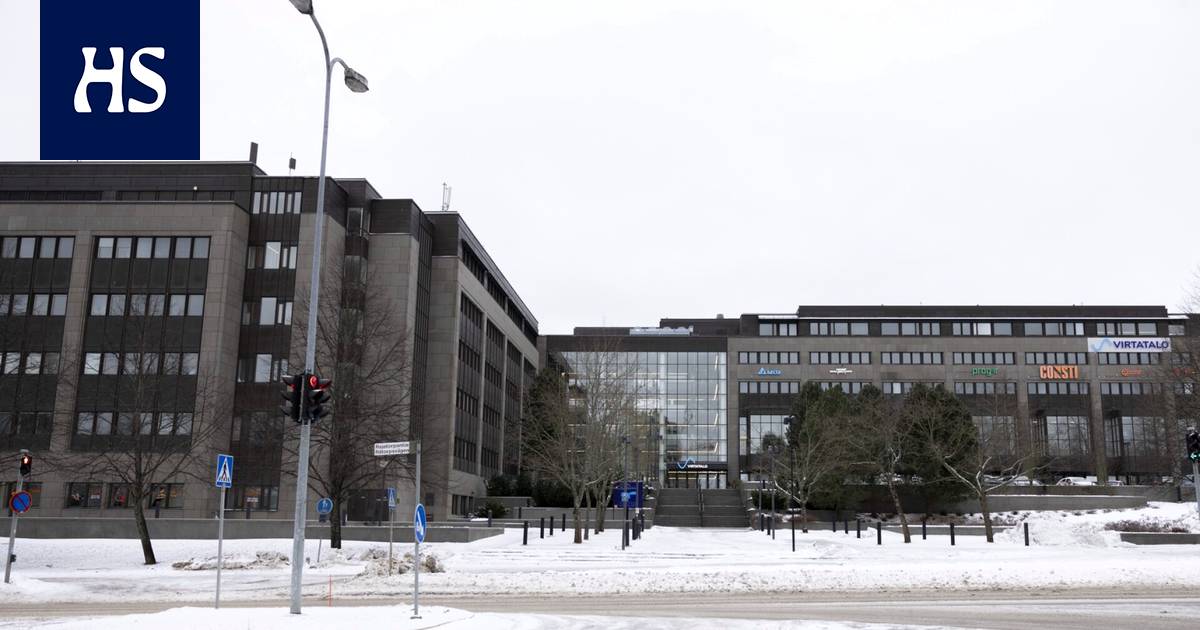 There is a huge Virtatalo in Myyrmäki, which emptied when the taxpayer moved away. Originally owned by Imatran Voima, the house is full of fascinating details. Now practically anyone can go to admire them.

Virtatalo, located in the center of Myyrmäki in Vantaa, is a solemn revelation, like a block of flats the size of a block. The Myyrmann shopping center across the street looks amazingly small compared to it.

The power house was built in 1987 as the head office of Imatran Voima, and today the house is owned by the employment pension company Elo.

The office building has served, among other things, Fortum, the successor to Imatran Voima, and the tax administration. As a powerhouse, Elo crossed it a few years ago. Before that, the building was known as the Colosseum Business Center.

The future of the house was open for a long time. Is no longer.

“Virtatalo will remain the home of many different players. The matter was confirmed when we did not have the blood service of the Finnish Red Cross as a tenant, they ended up building a new building five kilometers away. But good, “Elon’s project manager Antti Pyötsiä says.

The people of Myyrmäki will certainly be pleased with the solution, as they are probably more happy with the current tenants of Virtatalo than with the blood service. The Vantaa Dance Institute, for example, currently operates in Virtatalo.

“There will hardly ever be a situation where every square foot is rented.”

Tax administration was renting the house for fifteen years. When the lease expired at the end of 2019 and the taxpayer’s employees moved to Vallila, well over half of Virtatalo’s leased space remained vacant. At that time, according to Antti Pyötsiä, the situation in the house was “awkward” for a while.

“Once the house was turned into a single-user house, it was partially impossible to rent it out in smaller parts. The situation was alleviated when we made a new entrance opposite Myyrmann. Because we were able to divide the layers into smaller ones. ”

Now 20,000 of Virtatalo’s 30,000 square meters for rent have been leased, and Antti Pyötsiä describes the situation as “satisfactory” for the owner. When the leases now being negotiated are signed, the situation in the house is “good”.

The work of Tuonelan Virta by sculptor Pekka Pitkänen was acquired at Virtatalo in 2020. The fabric framed in the work is coated with a combination technique that uses iron, coal and water. Picture: Timur Yilmaz / HS

“Our intention is that in 2023 Virtatalo would be quite full of tenants. But in such a big house, there will hardly ever be a situation where every square meter is rented. ”

But What else does Myyrmäki Retropalace hide than a dance college?

Already the stairs leading to the main entrance deny that the house was once built as a haven for an influential company. They are so wide that a railing has had to be built in the middle of them.

The handrail conveniently divides the stairs into two different blocks, and therefore a simultaneous visit to Virtatalo by a large crowd would be corona-safe.

The wall of the main entrance is made of glass, and in the entrance hall, next to it, rises seventeen meters high. Raimo Utriainen (1927-1994) artwork Waterfall.

Raimo Utriainen’s Waterfall decorates the lobby of Virtatalo. Utriainen was a pioneer of Finnish abstract sculpture and was characterized by massive sculptures assembled from aluminum or stainless steel. Picture: Timur Yilmaz / HS

“I personally call the Frozen Imatrankoski, then it’s unfrozen,” says Pyötsiä and points to the copper-glowing waterfall on the other side of the lobby.

Next to the waterfall is a door that takes you to the Power Church. It is an evasive space for Myyrmäki Church, which suffers from indoor air problems. At this point in the house, therefore, the power of Imatra becomes the power of God. Is it so appropriate to say?

Pöntinen does not know of another church that would have been established in an open office. He is glad that the church, the parish hall and the office premises were found under the same roof in Virtatalo. A hint was received from the Myyrmäki store Petteri Niskanen.

Pöntinen is especially happy that you can drive to the church next to the waterfall.

“After all, water depicts baptism in ecclesiastical symbolism, and dew water flows, so the symbolism of Virtatalo is very suitable for us.”

The powerhouse was designed by architect Erik Kråkström as the headquarters of Imatran Voima. However, it never received official headquarters status. The entrance to the stream church is next to the waterfall. Picture: Timur Yilmaz / HS

Church has been operating at Virtatalo since the beginning of 2019.

“We hope to get back to Myyrmäki Church on the Advent of 2023. Until now, the renovation has been planned because the site is challenging and architecturally valuable. Construction work on Myyrmäki Church will begin next summer, “says Hannu Pöntinen.

However, visitors to the powerhouse still have a couple of years to admire this temporary church.

Pöntinen does not know of another church that would have been established in an open office.

Decorate the wall Maikki Rantalan and Essi Ruuskanen a mural that combines Christian symbolism and street art. The altar is set up in front of a glass wall.

“It is also a funny coincidence that those triangular skylights visible from the window can be thought of as a symbol of the Holy Trinity,” says Pöntinen.

Before the pandemic, the priest was on duty at the Power Church every weekday, but now the emergency room is on the phone. If necessary, an appointment with the priest can also be arranged face-to-face, or rather in masks. On weekdays from nine to three, anyone can come to the hall to silence.

According to Hannu Pöntinen, pastor of the Vantaankoski parish, Virtatalo is well suited as a church space. Picture: Timur Yilmaz / HS

Let’s get up now on the second floor of Virtatalo, where the Solar restaurant, open to all, is located.

The electronic screen in front of the restaurant advertises solar panels installed on the roof of Virtatalo. They have generated a flow of 1,500 trains a year between Helsinki and Myyrmäki. Presumably, there is enough power from the solar panels for this monitor as well.

While eating, you can admire the beautiful lamps designed for the space. The back wall and cabinet are decorated by a textile artist Kirsti Rantasen (1930–2020) designed almost wall-height rugs.

In the works designed by Kirsti Rantanen on the wall of Restaurant Solar, natural materials are combined with traditional weaving techniques. The monumental rugs have been woven by Heljä Wiljander. Picture: Timur Yilmaz / HS

The C-wing of the building used to house Imatran Voima’s representative offices and the board meeting room. An entire floor was reserved for the administration.

There was a rest room with a shower next to each senior management study. The management also had its own dining room and its own separate garage that could accommodate twenty-five cars.

The generous rooms and offices of the directors have been demolished, but the sauna section on the top, seventh floor of the house is still in place. The future tenant of the renovated open-plan office will have access to it.

The sauna department was designed for the representative use of Imatran Voima. The lockers in the locker room were left in place during the renovation by Elo. Picture: Timur Yilmaz / HS

The beech wardrobes in the sauna locker room are original, as is the teak deck floor in the fireplace room and the copper-clad fireplace. From the sauna facilities there is access to the vilpila and the open terrace.

When Virtatalo was built, the leaders of the sauna had a view of the forest from the terrace. Today’s connoisseurs have to look at the apartment building next door.

Only a small pine tree growing in a planting box reminds saunas of times past.

The terrace offers a view behind Virtatalo, where excavators dig the foundations of a laboratory building from the ground. It is the last building to be demolished on the former large plot of land once owned by Imatran Voima, and will be replaced by five apartment buildings. Picture: Timur Yilmaz / HS

Read more: Barracks offices erode their void in Espoo – The city is full of offices built in the 80s and early 90s that are no longer suitable for anyone

Read more: There were apartments in the iconic office tower in Espoo that few even knew existed – Eero Mäkinen, who has lived there for 28 years, tells what it was like to live in a ghostly colossus.