HS Turku Jan-Erik Andersson designed a detached house, which is guaranteed to be the strangest in Turku – It’s not enough either, but now he and his wife are going to cram into a nut-shaped mini-house 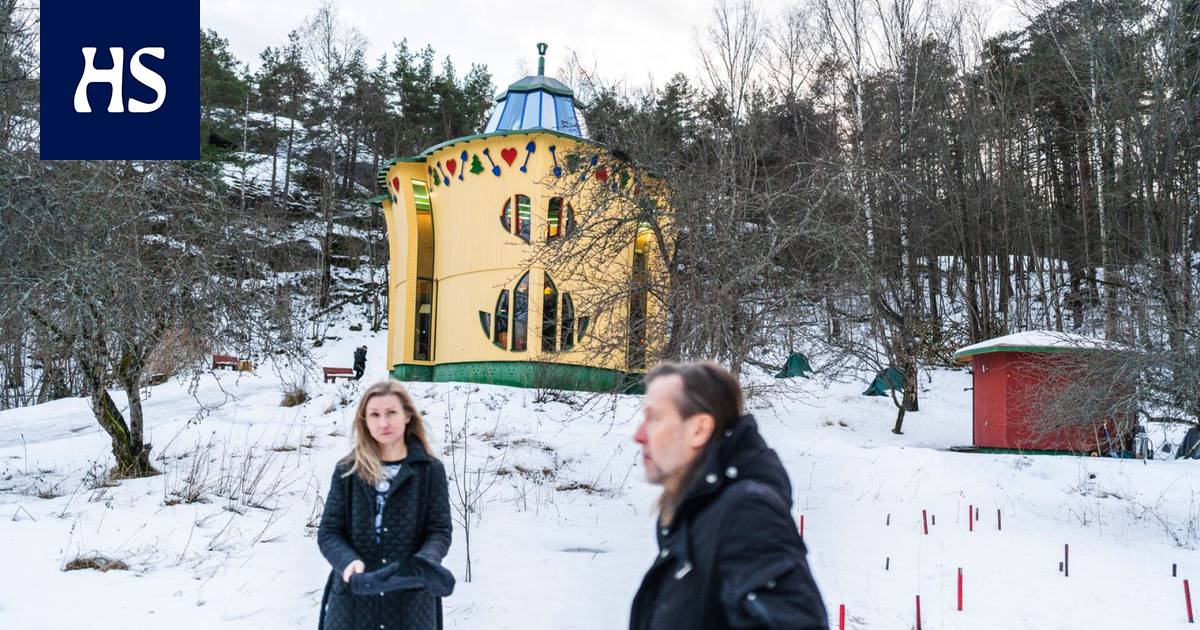 Jan-Erik Andersson, who designed the strangest house in Turku, will build a hexagonal little house out of logs this year.

Its can say directly: Lehtitalo is the most bizarre detached house in Turku. Artist Jan-Erik Anderssonn and his wife a graphic designer Marjo Malinin and their sons Adrianin the three-story home looks like a tree leaf when viewed from above, and its interior is dominated by works by 20 artists and artisans.

When entering the house in Hirvensalo, you have to throw aside your prejudices, because the house is full of artistic details. The works of art are part of the house and its structures.

There is a poem greeting visitors at the front door, which can be read through a mirror, there is a digitally made picture work on the kitchen countertop and a video installation is embedded in the third floor.

Little details come everywhere. For example, a person sitting on a toilet bowl on the second floor is greeted by one attached above a frame Elastic and Noora Schroderus book hurt advice: Eat poop.

Not everyone can let go of their prejudices.

“An architect who was on a tour of the tour asked with a serious face if anyone familiar with the house had become nauseous,” Malin says.

Lehtitalo, which was completed in 2009, was part of Andersson’s dissertation at the Academy of Fine Arts. In his research, he considered the role of art as part of the structure and appearance of a house.

The roof of the living room of the magazine is dominated by dozens of lamps. Picture: Ville-Veikko Kaakinen

Talon the design was by Andersson and the architect Erkki Pitkäranta the most significant plant-related cooperation. The duo has designed an eco-tree in the form of cumin seeds in Southern Ostrobothnia in Teuva and a gerbera-shaped garden school in Kanta-Häme, Janakkala.

In just over ten years, Lehtitalo has found its place as a destination to visit in Turku, which will be seen from abroad. When HS visited the house last week, two motorists stopped on a nearby road to photograph the house.

“Finns don’t dare come to the plot, but tourists can walk to talk instead,” Andersson reveals.

Lehtitalo has also become an internationally significant destination. For example, published in 2014 Total Design in The Book of Art History George H. Marcus presented 25 masterpieces of modern architecture, such as Frank Lloyd Wright, Alvar Aallon and Eero Saarisen jobs. One of the masterpieces presented was Lehtitalo.

Andersson the family should no longer live in Lehtitalo.

When Andersson began designing Lehtitalo in the early 2000s, he became the patron of the SOL companies, the owner of the entire work of art. Liisa Jorosen.

Joronen promised to bear the cost of building the house for half a million euros for ten years.

“I had ten years to get rich, but it is quite impossible for an experimental artist in Finnish conditions,” says Andersson.

A few years ago, a number of new patrons were found as the new owners of the house, who bought the house in the name of the Leaf on a Life Association to be established. The largest players were the Kone Foundation, the Konstsamfundet, the Svenska kulturfonden Investment Foundation and the Åbo Akademi University Foundation.

In the future, the association will offer a house for artists and researchers as a residency where a researcher can, for example, complete his or her research. The house also hosts seminars and concerts.

The house will not be left empty, as Andersson and Malin will leave much of the furniture in the house, even Andersson’s LP record collection.

When The future of the newspaper began to be secured, and the couple began to consider their next housing solution. One option was to buy a front house in the center of Turku. As an alternative, Andersson played with the idea of ​​moving to Las Palmas.

“I wouldn’t have come up with anything to do there. I would have docked myself to death, ”Andersson says.

He decided to do one more house and research it. The magazine is three-storey and almost 150 square meters. Its structures are exceptionally challenging. In many ways, the new house would be the opposite of Lehtitalo.

The houses are connected by their naturally depleted form. This time, Andersson and Pitkäranta ended up in a hexagon, a kind that can be found in nature, for example, in the structure of a bee cell or on the northeast coast of Ireland from the Giant’s Causeway basalt columns.

Artist Jan-Erik Andersson presents the roof of the Six-o-house, from which you can see the hexagonal structure of the house. Picture: Ville-Veikko Kaakinen

The new house plan was originally called Mutteritalo, but it changed to Kuusi-o-talo, as the outer walls of the house are built of a double log frame made of spruce.

While the Lehtitalo has curved shapes, the new house has only straight lines.

“When a shape is turned and curved, it becomes harder to build – and the price goes up. Now our goal is to build a house that anyone can build or build for themselves, ”says Andersson.

The six-o-house will be as small as possible. Andersson presents a scale model of the building, which, however, should not be described.

The house has two floors and the floor area is just over 30 square meters.

The couple has tested and looked for the smallest possible working spaces on the lawn. They have hit the ground with sticks and used them to assess the use of the facilities.

“Measuring has been insanely fun. For example, we have figured out how much space is needed for the dishwasher door to open, ”says Malin.

The new house only needs space for two residents, as 17-year-old Adrian is moving to live on his own.

The small size is also related to Andersson’s postdoc research at the Academy of Fine Arts.

“One thing to find out is what is the smallest possible place where two people don’t get on each other’s nerves,” Andersson says.

“The hypothesis can also be that we’ll meet each other after the first week,” Malin laughs.

In addition to the small house, Andersson plans to study the design of a living room that adapts to network communication and the suitability of a log house with a liver-grass roof for the urban environment.

An aluminum spruce will be erected on top of the roof of the six-o-house. Picture: Ville-Veikko Kaakinen

Art is of course also present in the new house, as the exterior wall will feature works of art by six artists. The idea stems from the classicism of the 1920s, when the facades of the houses were even indented for works of art.

The budget for Kuusi-on, which rises next to the magazine building, is about 200,000 euros, so the couple is prepared to do as much as possible on their own.

They hoped to get to the construction work already last summer, as the city of Turku granted a permit for the building in January last year.

See also  HS Espoo | What is it like to live in the workplace? Eero Mäkinen lived in the iconic office tower for 28 years, and from the ghostly silence he saw a huge change in the environment

However, the building inspectorate in Turku was exceptionally congested last year, so it took months to get a building permit.

Part of the reason for the slow pace of obtaining a building permit was revealed after contacting HS. Andersson went through the building inspection messages and noticed one message, a couple of months old, went unnoticed by him.

Jan-Erik Andersson and Marjo Malin have outlined the need for space in their new home with the help of sticks they have set up in the garden. Picture: Ville-Veikko Kaakinen

“Without Hesar’s contact, the building permit process could have remained in place for a couple more months,” Andersson smiles.

Six-on construction will begin immediately after obtaining a building permit, possibly during the summer. The mini-house should be ready at the turn of the year, because then the first resident artist or researcher will move to Lehtitalo.

“If Kuusi-o isn’t completed by the turn of the year, then we’ll even rent a caravan,” Andersson says.

Jan-Erik Andersson pictured in the toilet on the first floor of Lehtitalo. The pictures on the wall tiles are designed by the family. The robot shown on the left is the handwriting of Andersson’s son Adrian. Picture: Ville-Veikko Kaakinen

Have we amortized the life and death of the elderly?