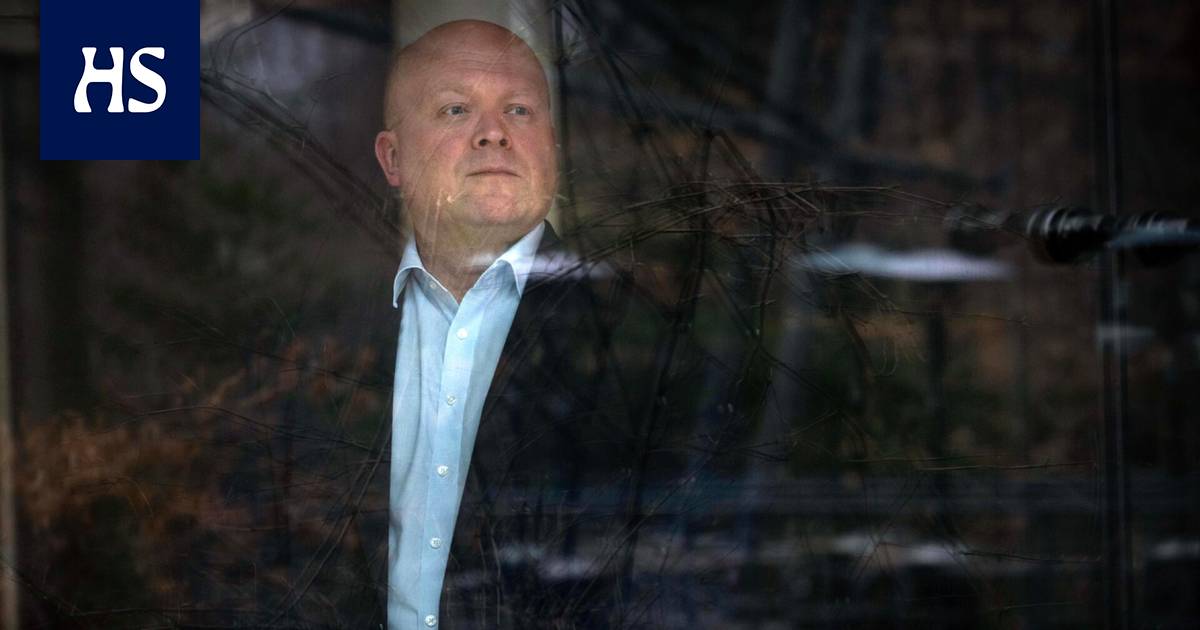 I have not met anyone in the United States who would be directly opposed to Finland’s aspiration to join NATO, says Mikko Hautala, Finland’s Ambassador to Washington.

Finland the embassy in Washington has been in a state of emergency for a long time.

It began when Russia concentrated its forces on the Ukrainian border and the president Vladimir Putin in December in his speech called for an end to NATO enlargement.

“They were a clear signal to me that this is now the case,” says Finland’s US Ambassador. Mikko Hautala. The delegation moved to a crisis organization model.

Hautala says that he considered Russia’s full-scale invasion of Ukraine in December to be very likely, quite clear. In his view, Russia put itself in a forced slit by saying its demands out loud.

According to Hautala, the Finnish state administration took the situation assessments very seriously at an early stage. In contrast, in the United States, for example, several members of Congress wondered about Hautala’s grim estimates of the likelihood of an attack.

He recalls the Reagan Forum on Defense Policy in California in early December, where he spoke with several members of Congress.

“I said there that if Russia launches a military operation, it will target Kiev in particular. It was clear to those familiar with Russian thinking that the strategic goal is to change the direction and essence of Ukraine as a whole. It can’t be done anywhere other than in the capital, ”says Hautala.

“This is the worst situation I’ve ever had in my career.”

He moved to Washington directly from the post of ambassador to Moscow and has been a much-sought-after man because of his background in Russia. Most of the time now goes into communication: the White House, the State Department, the Department of Defense, Congress.

“This is the worst situation I’ve had in my career and doesn’t compare to anything I’ve experienced,” Hautala says. “That’s what I think first in the morning and last in the evening.”

Hautala was a young official when the WTC attacks took place in 2001. Their impact was large, but it remained more limited than the ongoing crisis.

“It is no longer just a war in Ukraine. Russia is not happy with the balance of the world after the Cold War, but is looking for something new. It’s about what that balance is like. ”

European The rapidly changing security policy situation has put Finland in the United States in a completely exceptional spotlight.

The position of Finland and the president, known as Putin’s whisperer, have been widely covered in the American media Sauli Niinistö has been asked by the interviewee.

However, even more is happening beneath the surface. A lot of background discussions are asked to increase understanding and knowledge. Although the situation is harsh, now is the time to present Finland’s message in a unique way.

One of the key messages relates to NATO’s military alliance and its open door policy. Hautala has not met anyone who would have reacted negatively to Finland’s possible membership application.

“The main message is that this is Finland’s own decision. Some would clearly welcome Finland’s membership. Not everyone is excited about it, but I have not met anyone who is directly opposed to NATO membership. ”

According to Mikko Hautala, the consensus of the vast majority is that the United States, as a global power, must be able to pay attention to Europe and Asia. “Leaving Europe in the lurch would also mean weakening or relinquishing US dominance.” Picture: Julia Rendleman

In Finland there has been a lot of discussion in recent weeks about so-called security guarantees. The most common question is this: If Finland decides to apply for NATO membership, could it negotiate security guarantees with the United States during the application process?

The security guarantee would mean that the United States would defend Finland from Russian aggression if necessary.

Hautala doesn’t really consider the issue of security guarantees relevant or one that he would be sensible or even possible to pursue.

“Reality doesn’t know such security guarantees. These are also big political issues in the United States. In this country, war and peace are decided by the Senate. It is not legally possible to agree on such a matter without parliamentary scrutiny. “

During the crisis, some have recalled the “secret security guarantees” granted by the United States to Sweden during the Cold War. The United States is described As Sweden’s secret guardian angel.

“I can’t know what was said to Sweden at the time, but it’s clear to me that there can’t be legally binding elements here,” says Hautala.

He points out that support is available even if there is no written agreement between the two parties. The United States is also assisting Ukraine in many ways, although there is no compulsion to do so. It has not sent troops, citing, among other things, the threat of a nuclear war if the war broke out between Russia and the United States.

Hautala refuses to answer the question of whether Finland could receive more military aid than Russia has attacked in the wake of Russia’s attack.

“This is a very speculative question and it is impossible to answer. The exact context at the time of the event affects the form of the assistance. ”

“The USA sees, recognizes and wants a strong relationship with Finland.”

To the Ambassador what is crucial now is that the US is committed to a bilateral relationship in all situations.

“The USA sees, recognizes and wants a strong relationship with Finland,” says Hautala. “The essential thing is that the United States is interested in the stability of Finland and the surrounding region.”

After his visit to the White House, President Sauli Niinistö spoke about how to start the process of increasing defense and security cooperation. It has since been speculated that it may also include the groundwork for NATO membership. According to Hautala, the answer is no.

“I am not aware of the groundwork for NATO membership, it is precisely about increasing bilateral cooperation. This is not connected to NATO, ”says Hautala.

However, Finland’s possible membership of NATO is undoubtedly an issue that is now of great interest to the United States. Sauli Niinistö did it himself commenting in the American media, and recently on Monday the former prime minister Alexander Stubb shared his views on the American CNBC channel in an interview.

Stubb stated that it would not be wise for Finland to seek NATO membership right now. The Prime Minister of Sweden Magdalena Andersson stated in parallel, that Sweden’s accession to NATO would destabilize Europe’s security situation.

“This is not a bad idea,” Hautala puts it. “Right now we have a bad outlook. It’s hard to see where we are in a month’s time. ”

He recalls that joining NATO is a big deal with far-reaching consequences.

“The alliance is not geopolitical with Burana’s current headache, but it permanently tunes the body to a new position,” Hautala says.

The application for membership should therefore not be submitted simply because Russia has attacked Ukraine. In the longer term, we should think about everything that membership would entail for Finland.

Read more: Finland’s accession to NATO would be primarily a loss of prestige for Russia, says the expert – What would joining the military alliance change?

Hautala emphasizes that Finland is not in the “driving situation” or even close to it. It is good time to consider what is being done – and that is what Finland’s esteem in the United States and the world is based on, Hautala sees.

“Reflection, observation, weighing. It produces deep credibility, which is why we want to work with us. Finland is not seen as a geopolitical hosupetter. ”

Another thing on which Finland’s prestige is based is credible defense. It distinguishes Finland from Sweden, for example.

“A strong national defense is the a and o of everything. The elite knows us for that, we are valued for it. We are far-sighted in preparing for such unfortunate developments. ”

Hautala has followed the development of its former post in Russia in recent years with a gloomy mind, as the country has embarked ever deeper on authoritarianism. According to him, the country now clearly has totalitarian features.

Until a couple of years ago, he was Ilkka-Pohjalainen in an interview believes that Putin is not a dictator. A few weeks ago, the president of the United States Joe Biden used this very term from Putin.

“It is clear that the monopolistic features have been strengthened. The ingredients have always been the same, but the concentrations are now different than before. More acid has come. And the direction continues – the direction is very gloomy even in the inner sense. ”

Right now, the delegation is already trying to look ahead. The attention of many is still at war and the humanitarian crisis, but at some point the economic consequences will come to the fore.

“The consequence of this crisis will be the relocation of economic relations here. Russian trade is going to go down sharply, and somewhere that market needs to be sought. I don’t see a better place than the United States, where the economy is growing and is already the most important market. ”

Hautalan In recent weeks, the name has also fluctuated in the Finnish media for domestic political reasons, in the role of a potential presidential candidate.

Hautala admits that he has received “exhortations, support and support”. However, he does not want to comment further.

“I’m focusing on this work.”

However, you do not say no?

■ Ambassador to Moscow in 2016–2020. Prior to that, he served as a foreign policy adviser to the President of the Republic.

■ Master’s degree in political science and philosophy from the University of Helsinki. Major in political history and Slavic languages.

■ The family includes a spouse Heli Hautala and two children.

The fear of women, the root of Estrada's gender violence