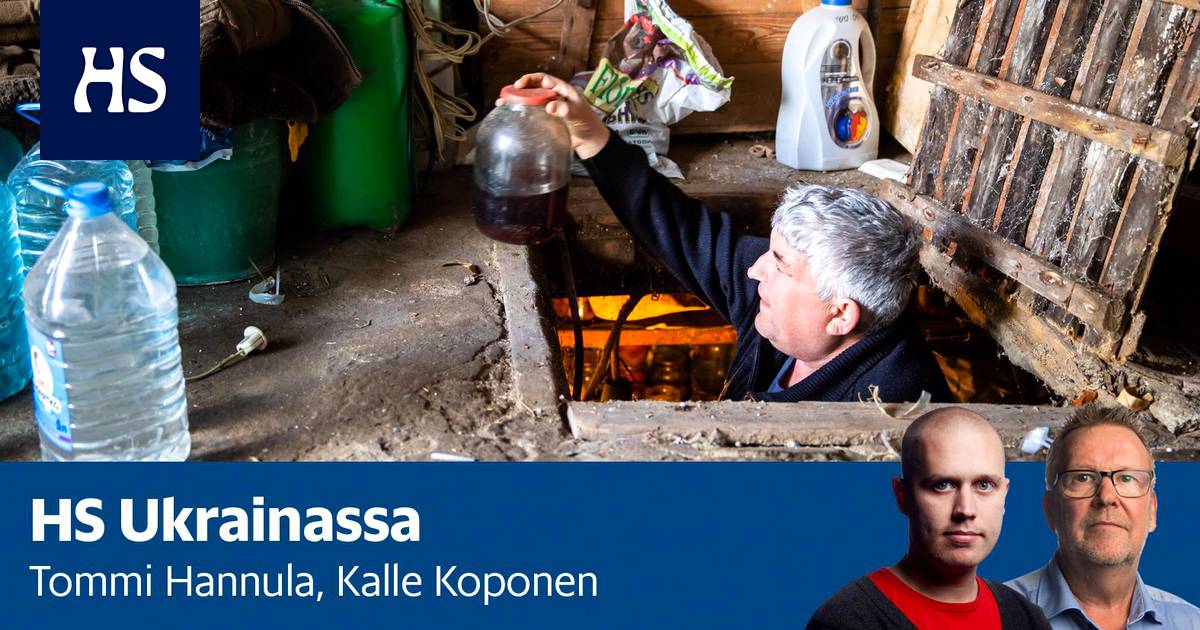 The question of the identity of Russian-speaking Ukrainians is gaining a new twist in the Greek city on the ceasefire line.

Vladimir Putin Russia is happy to stand up as a defender of all Russian-speakers in the world. It has also done so in recent days, moving its troops to the Ukrainian border.

In eastern Ukraine, a large part of the population is Russian-speaking, and hundreds of thousands of residents of its separatist regions have received Russian passports. Russian presidential administration announced two weeks agothat it may be “forced” to defend its citizens living in eastern Ukraine.

However, in the thoroughly Russian-speaking Mariupol, the idea of ​​Putin’s protection is puzzling.

Mariupol is an important industrial and port city in eastern Ukraine.

“We don’t need any help from Russia,” he says Jelena Varjonova on a park bench in Mariupol’s green Theater Square.

“I speak Russian, but I’m Ukrainian. There is nothing miraculous about that. ”

Everyday life revolves, but Russian-backed rebels are only twenty kilometers away.

The large market in Mariupol is located along a dilapidated street. In the background looms the Ilyich steel plant, one of two large industrial plants. In the market, some traders are of Greek descent.­Picture: Kalle Koponen / HS

Mariupol is located on the shores of the Sea of ​​Azov. The Azov Sea descends into the Black Sea from the Kerch Strait, over which Russia has built a bridge to Crimea.­Picture: Kalle Koponen / HS

Varjonova points out that Mariupol has developed rapidly. It is doing much better than the larger Donetsk, which is in the territory of Russian-backed separatists and is known for its dwindling coal mining industry.

The separatists also declared control of Mariupol in the spring of 2014. They were quickly defeated by the Ukrainian army there, but in the early years of the war they still tried to attack the city.

Now the damage caused by the artillery has been repaired and the center has been restored to be tidy anyway.

Drummer is on the outskirts of the city, which is dominated by the giant steel mills of the Azovstal and Ilyich companies, but they still offer jobs. Each factory area is many square kilometers in size, and the smoke from their chimneys can be seen and smelled far away.

The main employer in the Mariupol region is the steel industry. The picture shows the Azovstal factory. The main owner of both the Azovstal and Ilyich factories is, through his companies, the Donetsk oligarch and the richest man in Ukraine, Rinat Ahmetov.­Picture: Kalle Koponen / HS

Last the events of the weeks have given rise to frightening visions of the future. Not all of them would be spared in Mariupolka.

Russia has vaguely accused NATO of aggression, threatened Ukraine “in the beginning” and brought tens of thousands more troops to Ukraine’s northern and eastern borders, as well as to Crimea.

According to the EU, there are already more than a hundred thousand Russian soldiers in the region, more than ever.

Read more: Foreign Minister Haavisto on Russia’s actions on the Ukrainian border: “This should not happen in Europe in the 2020s”

Russia’s motives can only be guessed at.

Some experts have even considered possible a Russian invasion of Ukrainian-controlled areas – in part because the Russian military operation came behind the tree in 2014 as well.

“This time too, it’s possible, but how likely we don’t know it,” he says in a video call Maksym Yakovlyev, which runs the School for Policy Research incubator in Kiev.

Russia deprived the Crimean peninsula of Ukraine by military forces in the spring and winter of 2014. Russia fed eastern Ukraine with the help of the rebels it supported.

The war is still going on, and during the spring, the exchange of shots on the border line has accelerated.

Read more: HS in Ukraine: In the border village, war breaks out and Putin’s name does not want to be spoken out loud

If Russia wanted to gain ground access from the rebel areas of eastern Ukraine to Crimea, Mariupol would be immediately on the line of fire.

Ukrainian special forces advertisement in the center of Mariupol. The port city of Mariupol on the shores of the Asovan Sea in eastern Ukraine is only twenty kilometers from the ceasefire line between the government and Donbass separatists.­Picture: Kalle Koponen / HS

Putin new clues to the intentions are expected on Wednesday in his annual speech on the state of the nation.

What does the Ukrainian soldier think about the tense atmosphere? Could Russia even attack Ukraine?

“I don’t know, but they may want to control the entire Azov Sea, for example, to prevent Ukrainian ships from moving,” says a Russian-speaking soldier from the Ukrainian Marines. Vladislav Jurivich, 26, who wishes to appear in an interview with his first and host name.

The Sea of ​​Azov is a bay in the Black Sea east of the Crimean peninsula in the territory of Ukraine and Russia.

Jurivich says that he returned to the garrison in March on a nine-month assignment from Rantakylä Šyrokyne, the so-called ceasefire line. He says he participated in the exchange of shots there.

“I think something can happen in the near future because both bring equipment,” Jurivich says as he sips coffee from a cardboard mug at Mariupol Theater Square in civilian clothes.

What if Russia again declares that it is defending Russian-speakers in the areas ruled by Ukraine?

“I don’t understand that. I speak Russian but I do not need protection. We are doing our job in Ukraine on our own. ”

In Mariupol Russian-speaking does not really mean pro-Russianism. Despite the dominance of the Russian language, 84% of Mariupol residents considered themselves truly or somewhat Ukrainian and only 45% truly or somewhat Russian when researchers at the University of Oslo commissioned the issue. survey last July – September.

The result could be imagined to suggest Westernism, but it is not that simple at all. In the same survey, only 18% of Mariupol residents considered themselves really or somewhat European, but as many as 53% really or somewhat as a Soviet.

The Soviet Union collapsed 30 years ago, but its legacy is strong in the factory city.

“It doesn’t matter if we’re talking Russia or Ukraine. I was born in the Soviet Union, ”he says Yevgeny Otcheredko after stopping to enjoy the spring sun in Mariupol on a shopping street with his wife.

Putin has succeeded in slowing Ukraine’s path to the west, but if he has tried to get Ukrainians Russian-minded, he has failed.

More than half of Ukrainians strongly support EU membership. The share has increased during the war in eastern Ukraine that began in 2014. Less than 20% of Ukrainians support membership of the Eurasian Economic Union, which is being built around Russia.

However, EU enthusiasm depends on the region. In western Ukraine, 76 percent of people supported EU membership in the second winter, but in eastern Ukraine only 30 percent, said the International Republican Institute. survey, which did not even cover the separatist regions of the East.

Inland On the northeast side of Mariupol, a long military vehicle is used to crawl through the small town of Sartana to transport tanks. It is coming from the direction of the ceasefire line and its pallet is empty. The separatists are less than ten miles away.

Here, the identity policy of Eastern Ukraine takes on a whole new dimension. In the streets of Sartana, one can hear only Russia, but in the early years of the war, on the outskirts of the city, on the front side, the Greek flag fluttered defiantly.

The sign of the old Greek restaurant Kalmius has remained in place, although the fast food restaurant Yummy Eat now operates in the business room. Your employees are also of Greek descent.­Picture: Kalle Koponen / HS

There are tens of thousands of Greeks in the Mariupol region. Their traditional language is not modern Greek. Called ugly, it has developed in isolation from Greece as its ancestors fled Ottoman rule from the Greek territories of Crimea to the Mariupol region at the end of the 18th century by the Russian Emperor. Catherine the Great called.

“Perhaps 35-40% are now part of Greece. I also speak Russian to my children. So I think in Russian. Still, I’m primarily a Greek “, Kostits says.

Vyacheslav Kostits runs the Sartana Cultural Center. “My family name may have been Kostitsi in the past, but the Greeks here changed their name in 1937 to cover their background. [Stalinin vainojen takia]. ”­Picture: Kalle Koponen / HS

Behind the curator Tatiana Bogaditsa is a painting depicting the transition of the Crimean Greeks to the Mariupol region. The Greek Museum of Sartana contains the cultural heritage of the Greeks who emigrated from Crimea a couple of hundred years ago.­Picture: Kalle Koponen / HS

Ancient Greece is called the cradle of Western civilization. On that basis, it could be assumed that there would be a strong EU spirit among the Russian-speaking Greeks in Ukraine.

“Putin does not want Ukraine to approach the EU and NATO because he believes he can still restore the Soviet Union, but I think the EU is the only option for Ukraine,” Kostits says.

But the opposite is true of the transport entrepreneur Andrei Gaitan, although he is Greek through three grandparents and Ukrainian through one.

Gaitan, 38, owns four trucks with his drivers driving cargo to Russia and Georgia, among others. In the kitchen of his three-story, 165-square-foot detached house, he says he refuses to eat certain chocolates or watch certain TV shows.

He boycotted confectionery maker Roshen because it was founded by the previous president of Ukraine Peter Poroshenko. He boycotted the TV production company Kvartal 95 because it is backed by the current president, a former comedian Volodymyr Zelenskyi. Gaitan considers them too Western-minded.

Greek-based transportation entrepreneur Andrei Gaitan lives with his mother Anja and his own family in a large house in Sartana.­Picture: Kalle Koponen / HS

“If I were president, I would be the first to tell Europe to go to hell here. If America didn’t stick its nose into all the crises, Ukraine would be all right, ”Gaita roars by the tea.

“At least Putin is making the right decisions and protecting his country’s interests. At least he’s behaving like a real president. … If I had a hundred grams of vodka in front of me, I could talk about this until morning. ”

However, the vodka does not appear on Gaitan’s kitchen table.

Therefore, the last word is given to a Greek pensioner, a former industrial climber Hristofor Tanadi, 59. He raises rabbits for food in his backyard and picks up surprise guests from the cellar with sweet wine he has made from a Moldovan grape variety.

“I’m Greek, but most of all I am a human being. A passport is just a puma mask. ”

The cannons do not even question nationality.

“I hear the sounds of shooting every day. It’s scary. ”