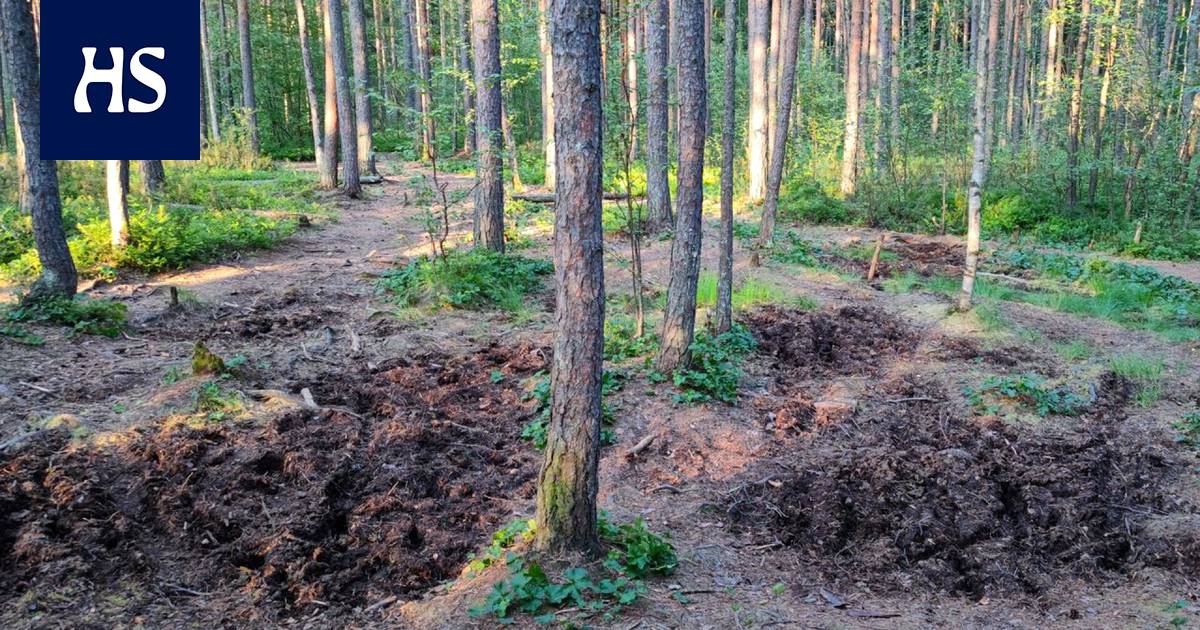 The terrain in the swamp next to Jakomäki has been destroyed, although the area has been banned from cycling since the 1990s.

Mountain biking and walking outside the marked routes in Helsinki’s nature reserves, there will be a steady pace of contacts with the city’s environmental services.

In the Slåttmossen nature reserve near Jakomäki, mountain biking is completely prohibited.

Not all mountain bikers have either been aware of the ban or ignored it, as Slåttmossen has clearly cycled and destroyed the terrain.

Admittedly, the signposting in the area does not mention a complete ban on mountain biking.

The sign reads: “Movement in the area is only allowed on the indicated paths.” In addition, there is a text that prohibits any other activity that may adversely affect the conservation of the area’s flora and fauna.

Vantaa the Slåttmossen nature reserve near the border was established on 13 December 1995. Cycling was already banned at the time of its establishment.

“When mountain biking is banned then, people have already been able to think about the number of people going in the area in the future. In all nature reserves established later in Helsinki, it has not been noticed at the time of its establishment, ”says the City of Helsinki’s environmental planner. Hanna Seitapuro.

According to Seitapuro, walking also puts a strain on nature, so hikers alike must follow the instructions to stay on marked trails.

Slåttmossen is one of 65 nature reserves in Helsinki, about half of which are located on islands to which there is no road.

There are four protected bogs in the nature reserves, ie in addition to Slåttmossen, Maununneva, Jollas bog and Rastila neva. The 7.49-hectare Slåttmossen is the largest of the protected wetlands.

“It is a raised oasis. Kohosuo means that the bog is higher in the middle compared to its surroundings. Peat has accumulated in the middle of the millennia. In Helsinki, it is a rare area and therefore protected, ”Seitapuro explains.

The structure of the Slåttmossen bog is typical, according to Seitapuro.

“There are drier rots, or creams, and damp spots, or passages with water, in the swamp. In the coastal area of ​​the Gulf of Finland, Slåttmossen is a representative example of a salt marsh. ”

Slåttmossen is a representative example of an elevation, so it would be important not to stab the area. Picture: Antti Kukkonen / Reader’s picture

In Helsinki the protected areas are quite small and therefore subject to a particularly high pressure because of the large number of people living in the metropolitan area.

It is therefore necessary to restrict access to protected areas to certain areas. Especially when protected areas often also contain rare or even endangered plants and animals. They can also be areas of rare habitat.

“Especially in the spring, when the vegetation is still sensitive and it is the nesting time of many animals, walking in non-marked areas consumes the flora and disturbs the animals,” Seitapuro recalls.

Also read: Helsinki plans to help forest areas from mountain biking – cyclists have cut down trees and dug up land in nature reserves

“Genuine has become good feedback. The entrapped plants have begun to recover. ”

Thus, building fences in more and more protected areas could be a good way to save the magnificent nature, as the mere information and prohibition signs do not seem to be effective for all nature walkers.

Slåttmossen To the north are four ponds created from gravel extraction sites: the Jakomäki pond on the Helsinki side and the Vaarala ponds on the Vantaa side. Ponds were once called the “Vaarala Riviera” because they were popular bathing places after the wars until the 1960s.

Last summer, Vantaa City Council decided on a change to the town plan that will enable recreational use of Vantaa’s ponds. The Jakomäki pond has already been marked for recreational use.

The ponds are not part of Slåttmossen’s protected area, although they are important for their natural values.

Read more: The forgotten “Vaarala Riviera” awaits swimmers in Vantaa – The owners of the ponds are Fazer and Westerkulla Manor, with whom the city must first reach an agreement