HS-Gallup | The Coalition Party leads the municipal election poll, with the SDP and the Basic Finns fighting for second place 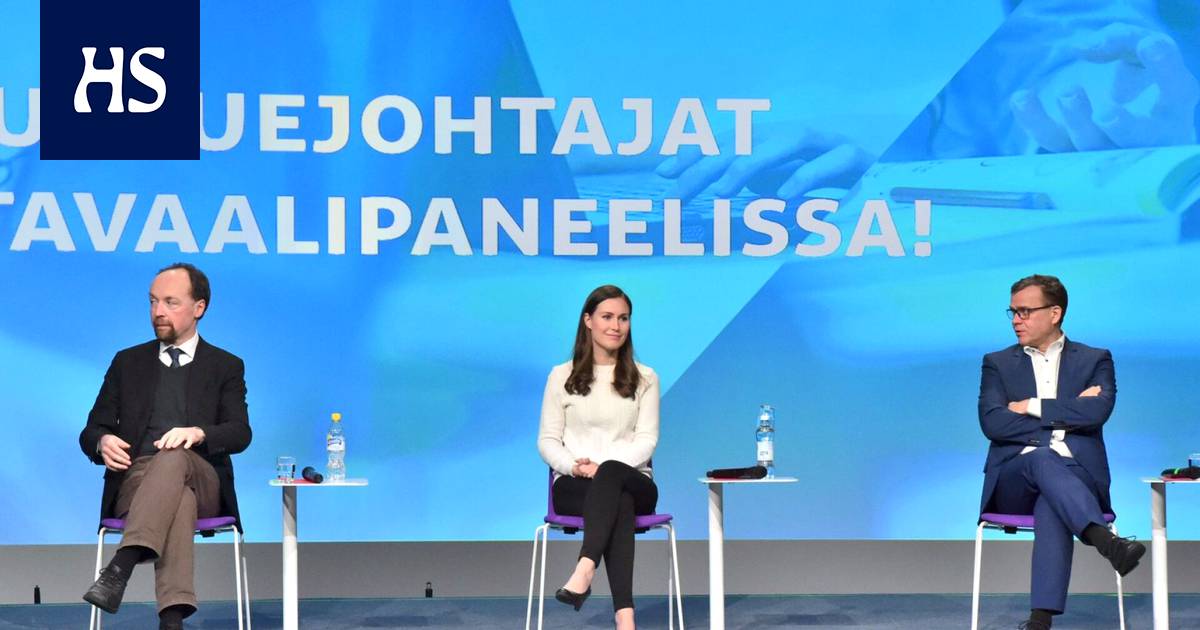 On Sunday it will be decided whether the Coalition Party will get the number one position in the municipal elections that it has voted for, or whether the national uplift of the basic Finns of the second opposition party will even reach the top.

The Coalition Party is in a fairly clear leadership position at the end of the election campaign. At the time of collecting the data from the HS support survey, the party’s support in May – June was 19.6 per cent. The support of basic Finns was exactly 18 and the SDP’s practice was practically the same, ie 17.9 per cent.

For basic Finns, this would be a jump of almost ten percentage points compared to the last municipal elections, while for the SDP, a poll reading would mean a small decrease.

A reading of 12.7 per cent in the center would indicate a loss of almost five percentage points, and 11.1 per cent for the Greens also means a decline in support.

Inquiry at the time, about a third still could not or did not want to say which party would vote in the municipal elections or said they would not go to the polls.

Of those who had not yet voted at the time of the interview, as many as 30 per cent said they could still change party and more than ten per cent abstained altogether.

Quite a large number of supporters of the Greens, almost half, could still have changed parties at this stage. In contrast, only one-fifth of basic Finns had the same ideas.

Almost a fifth of basic Finns said they could abstain. The share is bigger than supporters of other major parties.

The Center Party differs in this respect from the supporters of the other major parties: the greater part of them would do neither, that is, abstain or change party.

Size nearly 70 percent of the respondents had either voted or were definitely planning to vote in the municipal elections at the time of the interview.

Proponents of the Left Alliance and the Coalition Party have stronger voting intentions than supporters of other major parties. Eighty-five percent of Left Allies and 79 percent of Coalition members had either already gone to the polls or considered the vote clear.

The HS municipal election survey also compared recent voting intentions with behavior in the spring 2019 parliamentary elections, where the Basic Finns were more successful than expected.

From the answers it turns out that 19 per cent of basic Finns who voted in the spring 2019 parliamentary elections are currently unwilling or unable to express their position or even intend to abstain.

As many as 43 per cent of basic Finns who voted in the 2015 parliamentary elections were included in this group when asked about the matter a couple of weeks before the 2017 municipal elections.

Proponents of the Left Alliance and the Coalition Party have stronger voting intentions than supporters of other major parties.

After the success of the 2015 parliamentary elections, the Basic Finns gained only less than nine percent support in the 2017 municipal elections.

“The situation now seems to be clearly more positive for them in this respect,” says Kantar TNS, research director Sakari Nurmela.

At least According to Nurmela, the partial explanation is the large number of basic Finns, almost 6,000, compared to less than 4,000 in the previous municipal elections.

In the HS parliamentary election survey in May the popularity of basic Finns was 21.6 per cent.

However, Nurmela points out that part of the support of basic Finns comes from people who could not or did not want to tell how they voted in the 2019 parliamentary elections or said directly that they did not vote at that time.

“The latter make up as much as about half of this completely new group of supporters of basic Finns, and it is clearly a larger part than any other large party,” Nurmela says.

According to Nurmela, getting this group moving is very important so that the party can realize the positive thinking about it into voices.

A large number of candidates alone may not help if a suitable candidate cannot be found in the home community.

The most there are almost 7,000 candidates in the center, with which the Basic Finns are fighting for votes, especially in rural areas.

“Knowing that there has been a connection between the election success and the total number of candidates, one can also wonder if the center still has a chance to surprise,” Nurmela ponders, even though the support figures for the ruling party are now creeping down.

According to surveys conducted by Kantar TNS, two out of five do not make their party elections until the day of voting or a few days before. More than every other person leaves their selection at the same time.

“Everything between the center and basic Finns will be resolved in the last week,” says Nurmela.

Prime minister Sanna Marinin under his leadership, the sdp has maintained its support for the parliamentary elections relatively well in terms of measurements, although sometimes bumps have been made in the treatment of the corona crisis, for example.

According to Nurmela, it is also very important for the SDP to mobilize its own forces, and in addition, new support should be turned into votes as much as possible.

“With fewer candidates in the SDP now than in the last municipal elections, renewing the last success seems difficult, although of course there is no impossibility,” Nurmela predicts.

Everything between the center and basic Finns will be resolved in the last week.

Coalition Party the nationwide opposition policy has not raised its support for the parliamentary elections in terms of measurements, but Westise says the party is usually a “guaranteed performer” in municipal elections.

Proponents of the Coalition Party are said to be loyal voters who manage to support their own party from one election to another.

“It seems that the members of the Coalition Party are still going to vote. A larger than average number of supporters of the party said they would definitely vote, and there are now somewhat more candidates than last time, ”says Nurmela.

“If the party mobilizes the same size of its parties as in the parliamentary elections two years ago, the reading presented in the support assessment may materialize, assuming that turnout in the elections is roughly at the same level as in the previous municipal elections,” Nurmela says.

In the last municipal elections, the turnout was 58.8%.

Investigator Westinen recalls that turnout rose in the last municipal elections, especially in the largest cities with at least 180,000 inhabitants. These include Helsinki, Espoo, Vantaa, Tampere, Turku and Oulu, where a total of almost 90,000 more votes were cast in 2017 than in the previous municipal elections.

In particular, the support of the Greens, the Coalition Party and the Left Alliance relies heavily on large cities, while the center represents the other extreme and gathers its support from small municipalities. The strongest group of the SDP and basic Finns are medium-sized cities, according to Westise’s study.

Enlarge Of the growth centers in Tampere, for example, the Coalition Party would now win on the basis of Aamulehti’s May Gallup and leave Marin-led SDP second.

According to the same Gallup, the Basic Finns would almost triple their number of votes in Tampere compared to 2017. It would lose fourth place immediately after the Greens.

In Oulu, Perussuomalaiset aims to double its voting rights. As the largest party in Oulu, he is trying to persevere with the center, which is also being challenged by the Coalition Party.

In Turku, the position of the Coalition Party is strong, and the Greens compete with it for the seat of the largest party and at the same time the mayor.