HS Espoo | A painful sting is being experienced on the western edge of Espoo today, when a concrete library that has served for half a century closes its doors: “We can’t sprinkle libraries every two kilometers” 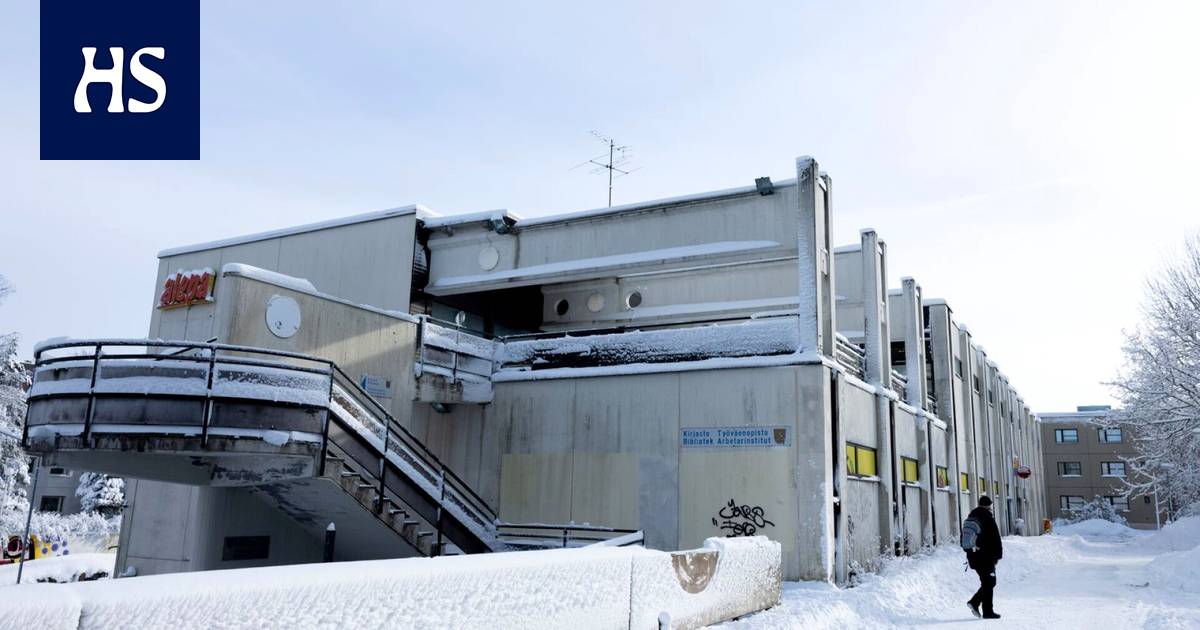 Souka has had a library in the same location, upstairs in a tiny mall for 50 years. When the house was completed in the 1970s, it had a Discount Hall on its wall, now Alepa.

Today, Monday, the much-loved Souka Library is open for the last time.

Reservations have been requested for other libraries since mid-February. Tomorrow the staff will start packing the material in the moving boxes.

To the library transported along curved outer stairs. There is no barrier-free route to the premises. Some people in prams and wheelchairs have used the elevator behind the platform, but it is not possible to get through without lifting aid.

The stairs leading to the Souka library were covered in snow. Picture: Timur Yilmaz / HS

This is one reason for the decision to close: the library facilities are in poor condition and do not meet current standards. The entire shopping center will be demolished when the center of Souka is renovated. The closure of the library is also due to the fact that the City of Espoo is actively looking for savings.

A new large library will open in about a month’s time, a couple of kilometers away from the Espoonlahti shopping center Lippulaiva. It is also planned to serve those who have visited the Souka library.

“We can’t sprinkle libraries every two kilometers, we have to think about the whole growing city and its needs,” says Espoo’s Director of Library Services. Ritva Nyberg says.

Some library users are upset that the familiar place is closing the doors and the library journey is getting longer. Some, on the other hand, are excited about the new library.

Holm couple have walked from Kaita to Souka Library, as they usually do. When Heli Holm stores books in the return vending machine, Jan-Olof Holm browsing the bookshelf.

Heli and Jan-Olof Holm look at what the recycling shelf has to offer. Picture: Timur Yilmaz / HS

Holmit has been to the Souka Library for about 30 years. In the early days, there were children who later went to the library on their own. Now the children are already in their thirties.

According to Heli Holm, both large libraries in shopping centers and small local libraries are needed.

“Their function is so different. Everything that supports reading should be a part of everyday life and not so far away that it is necessary to jump on the bus and find out the schedules. ”

Customer Service Manager Leena Kaunisto brings children’s books to the shelves. More than half of the visitors to the Souka library were children and young people. Picture: Timur Yilmaz / HS

More than half of the visitors there are children and young people, says the customer service manager Leena Kaunisto.

For this reason, the adult reading room was converted into a lounge for children and young people a few years ago. In the afternoon, over a dozen primary and secondary school children will be present during the school winter holiday week.

A few boys nod in front of the big screens and play a video game. Some chat with library staff. Some have so much sound and energy that the worker asks the boys for a moment in the yard to bite oxygen. A few minutes of roaring in the snow helps and the behavior is calmer after returning inside.

13 year old friends Asma Hussein and Cassandra Heinsaar sitting on the couch next to the board game shelf. The best of them in the library are their own facilities for young people, where you just have to be there and “chill”.

Sometimes they grab a game from the board shelf and play it. Heinsaari’s favorite game is Labyrinth. Hussein says he borrows books every now and then. The best of her are the diary-like works that tell the story of young girls.

Both say they are starting to visit the Flagship Library. They hope to find facilities for young people there.

The Souka Library has been an important place for young people because the activities of the Souka Youth Facility have been reduced. However, the small library has not always had enough staff and youth work skills to handle difficult situations.

“The flagship will have specially designed facilities and kitchens for young people, and staff with skills in youth work have been recruited. Security guards are also available in the shopping center faster if the need arises, ”says Nyberg, Director of Library Services.

“Finally! I have been waiting for this for a year and a half, ”says Roivainen.

Because of the corona, workshop afternoons where employees advise on using the printer have not been possible for a long time.

But now a library educator Anna Pöyhönen to teach.

“Watch out for the nozzle, it’s twice as hot as boiling water,” he recalls.

The printer’s clock shows that in an hour the item is ready. In the meantime, Roivainen has time to tour the rest of the library. She says she often goes to the library after school to get books and coloring pictures. It is a longer distance from Soukanniemi to the new library from home.

People at Souka Library wrote papers last week about thanks, memories and things they miss from Souka Library. Here are the greetings from Lumi Roivainen, who was interviewed by HS. Picture: Souka Library

Nyberg understands that closing the nearby library is causing emotional turmoil and that many are worried about the fate of the Souka Library.

“But our library services also need to be implemented Economically sustainable Espoo program. The facilities are really the only thing we can save when staff costs have already been reduced, ”says Nyberg.

This is the council savings program adopted in October 2020with a total target of approx Savings of EUR 147 million in the city’s operating expenditure in 2021-2025.

Soukka a mini-library should be opened when a suitable space is found, where material can be borrowed and returned.

The city has been negotiating with the parish association for a place near the old library.

“Finding space isn’t quite easy because it’s a cost-saving measure as a whole and shouldn’t cost very much,” Nyberg says.

The Souka library is closed on 1.3. from. The last opening day of the temporary Pikkulaiva library is March 27. The flagship’s new library will open its doors on March 31st.