HS analysis Will the dividend payment of Finnish banks be restricted so that they can afford to keep Italian banks afloat? 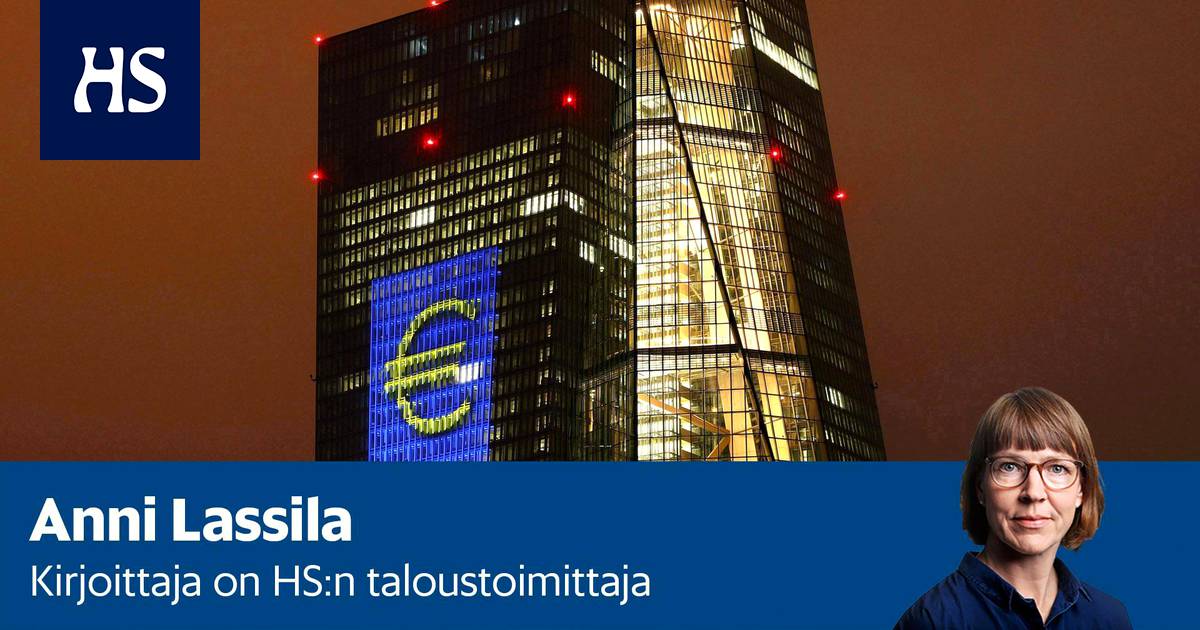 At the latest in mid-December, many bank equity holders sighed deeply. European Central Bank announced for the third time within a year that banks will not be free to pay dividends on 2019 or 2020 results, but the majority of dividend payments should be deferred until next fall.

For the first time, the payment of dividends was postponed immediately after the start of the interest rate crisis last spring, the second time in the summer and now for the third time.

The ECB justifies the recommendation on the grounds that the final consequences of the interest rate crisis in the economy and in bank customers will only be revealed once the crisis is over and, for example, the long repayment periods granted to customers expire.

Decisions related to the construction of the so-called Banking Union. In the wake of the financial and euro crises, there was a desire to create mechanisms for the EU banking sector to ensure that the bills of banking crises no longer fall on taxpayers.

A separate agency for bank resolution was set up, and a joint bank-funded resolution fund was set up to finance crises.

So far, bank stability contributions have been collected in national funds and were not to be transferred to a common, solidarity fund until 2024. In November, the start of solidarity was brought forward to 2022.

Should a large European bank become insolvent and its restructuring could not be resolved by resetting the claims of the bank’s owners and certain creditors, the liquidation of the bank would be handled by a common fund.

If the fund’s resources were insufficient, it could borrow funds from the state-funded EVM, but even then the money would be raised retrospectively from banks.

In the banking sector began to consider whether things were related. The ECB justifies the dividend ban on the grounds that banks do not waste the capital they may still need to cover their credit losses. But does the idea actually continue so that they are not allowed to waste their capital so that they can afford to save other banks as well.

Everyone knows that the condition of eurozone banks varies. Even before the epidemic, for example, Italian banks had much more non-performing loans than, for example, Finnish banks. The gap has only increased in the crisis, because the Italian economy has suffered much more severely from the crisis than Finland.

Is the payment of dividends by Finnish banks therefore restricted because they could afford to save Italian banks in due course?

The Italian economy has suffered much more severely from the interest rate crisis than Finland.­Picture: Patrick Pleul / DPA

OP Bank Group chief analyst Antti Saari does not consider the idea impossible, though rather agile.

“Of course, through the stability contributions paid to the resolution fund, banks could become payers. Rather, however, it is a matter of wanting to limit dividends to everyone so that some banks are not stigmatized. This has been the way the ECB’s banking supervision works, ”says Saari.

“By the same logic, the ECB does not directly tell in its stress tests which banks have failed. In the United States, for example, the names of banks that have been repulsed are revealed, which means that they will rectify their situation as a result of pressure from the market. ”

“For the investor, this is causing the ECB’s banking supervision to start to look pretty arbitrary. It makes euro area banks less attractive investment destinations and is reflected in all major European banks, ”he says.

According to Saari, Nordea’s value in relation to the result is still quite at the same level as the Swedish benchmarks.

“But Nordea’s return on equity is quite low compared to its Swedish competitors. When it is not allowed to pay dividends, its overcapacity only increases and further weakens the figures, ”says Saari.

The problem would not be great if Nordea were to pay all the accumulated dividends at once next autumn and winter. Then the owners would get their extra capital out of the bank.

“However, I am skeptical as to receive the banks to catch up on missed distribute dividends in arrears.”

Solidarity the increase does not end in banks ’equity and resolution money. The last missing piece of the Banking Union, the common deposit guarantee, will inevitably progress in the bureaucracy.

It now looks like it will be decided appropriately sometime next winter, when funds may begin to be needed as the weakest banks collapse as a result of the crisis.

In the Banking Union, detailed plans have been drawn up for the largest banks in the event that a bank runs into problems. These banks are so large or so important to their country’s financial system that they are virtually insolvent. Traditionally, such banks have been rescued with state funds. In Ireland, during the financial crisis, the measure led to a cash crisis for the whole country.

Since then, there has been a desire to ensure that the owners of even large banks are held accountable and, if funds are needed in addition, the vital and viable parts of the bank are kept afloat through a resolution fund.

Finance senior lawyer Olli Salmi says that in the context of contingency planning, even bank structures have been changed so that the bank can be more easily divided in the event of a crisis.

The plans have been made so carefully that they should also work in practice. According to Salmi, the resources of the resolution fund may be needed, for example, to temporarily secure the bank’s liquidity.

Smaller banks, on the other hand, can be allowed to go bankrupt. Even then, however, deposits of up to EUR 100,000 are paid to customers from deposit guarantee funds if the bank does not have sufficient liquid funds. Until now, the funds collected from banks have been national, but the Banking Union wants to make them common.

“The idea is that if a country’s fund were emptied, a common fund would lend it funds. The common fund, in turn, would borrow funds from other national funds, ”says Salmi.

According to Salmi, the concern now is that if a lot of problems are known, the system could create an incentive to let the banks down quickly while the money is still available.

If the situation of a country’s banking system is really troubled, it remains to be seen once again how well-agreed principles hold. In the wake of the crisis, the principles in the EU have always been more flexible, as long as the decision is put together.

“Does this idea like repaying funds borrowed from other countries’ funds, or does it come up with a compromise that doesn’t look very good for countries where things have been handled well, ”he says.

Not only banks but also taxpayers’ money is at stake.

When The construction of the European Banking Union began after the financial crisis, the order of march had to be clear. First, joint banking supervision will be put in place, which will ensure that banks are supervised to the same extent and guided with a tight hand to clean up their balance sheets and risks. Only then was there a need to increase solidarity.

However, the interest rate crisis came as a surprise, and the clean-up of banks in some southern European countries in particular was still badly under way when new problems came into play. There are legitimate concerns in the Finnish financial sector.

From the point of view of society, the situation is contradictory. The Treasury minister Matti Vanhanen justified the acceptance of solidarity in resolving the crisis with the huge size of the Finnish banking sector.

In practice, Vanhanen meant Nordea. If it got into trouble, rescuing the giant bank would put the entire Finnish economy hard. So Finland also needs wider shoulders.

However, if a so far very solvent Nordea were to pay for the crises of other banks, it would weaken Nordea and the financial markets in Finland accordingly.

Decisions on deposit protection have not yet been taken. You should be careful at that point.

Schalke perseverance slogans on the microphones – what should they say?

Ivana Yturbe would be pregnant with Beto Da Silva, according to Magaly Medina