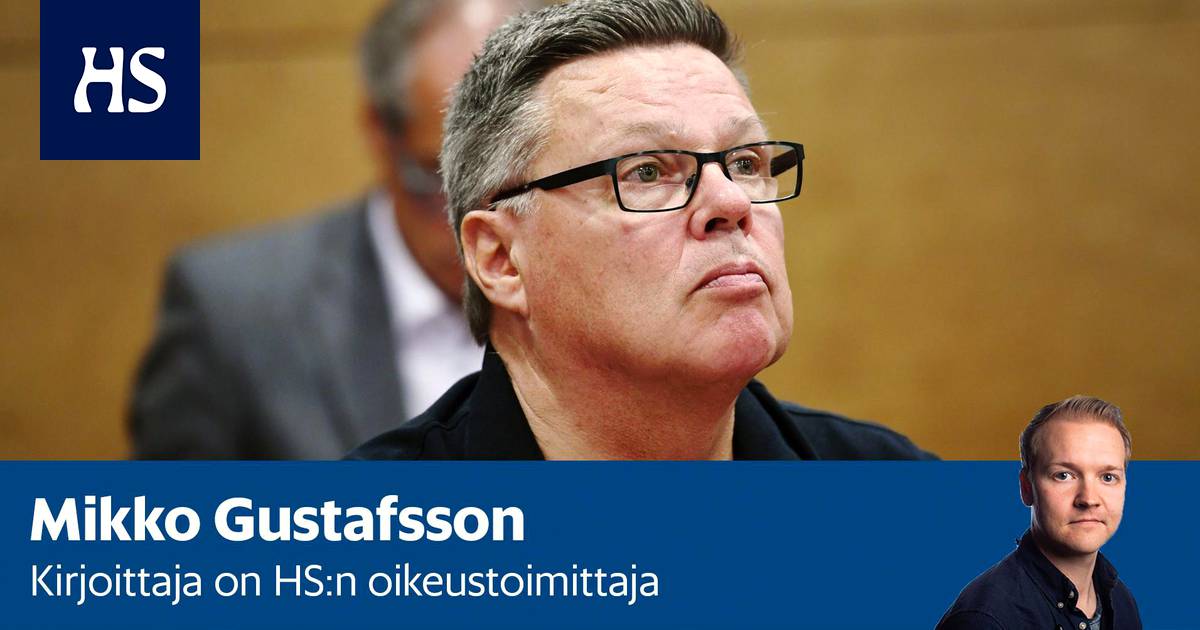 The Helsinki Court of Appeal eventually intervened in the illegality of policing, which helped Jari Aarnio in other crimes, writes HS legal journalist Mikko Gustafsson.

How the head of the drug police was able to run a large-scale drug business in a country that has repeatedly been rated one of the least corrupt in the world?

So far, no answer to this question has been found in court decisions, although the former head of the Helsinki Drug Police Jari Aarnio has had time to judge almost everything possible – even murder.

On Friday, the court finally handed down a verdict with key answers. The decision concerned the secret acquisition of information by the Helsinki police, and it focuses on the small details of the regulation of police information source activities.

Behind the legal barbed wire fence, however, there is a crystal clear view of how the case of Jari Aarnio was possible.

Fresh The Court of Appeal ruled on criminal liability for organizing and supervising the information activities of the Helsinki Police. Therefore, it did not compare the new findings with Aarnio’s other crimes.

However, it is from that comparison that the judgment has the greatest weight.

It is worth bearing in mind what the court has previously said about the core screening of Aarnio’s drug case – the so-called Pasila man’s phones.

In the drug story, Aarnio appealed that the police kept in touch with underworld information sources on prepaid phones. The court, for its part, found that Aarnio ran hundreds of pounds of drug business on those phones with a long line of drug offenders.

It was not unclear to anyone sitting in the courtroom that Aarnio and the Underworld League had a good chance of racking up unwanted competitors from the market. The secret information sources of the police and the crimes of Aarnio could therefore overlap if necessary.

Fresh the judgment has two key conclusions that dispel the aura of criminal mystery around the case of Aarnio.

The first is that for years the data source activity was run around the plant completely illegally – without registering the sources. Second, the police commander in charge of the facility Jukka Riikonen did not respond to information about the problems and Aarnio’s second man Petri Rainiala did not take care of the operation, even though it had been assigned to his responsibility.

Jari Aarnio destroyed the names of data sources from the department’s register sometime towards the end of the last decade. His power at the facility is evidenced by the fact that above or below there was no response to alarming signals or even cradle of illegal activity.

Court of Appeal limited criminal liability for the illegality of information source activities in a case to the management of the Helsinki Police Department. It did not happen for legal reasons but because, according to the law, the police administration did not have sufficient information about the events.

Prosecutors had different perceptions of senior police records. It is likely that the view of the Court of Appeal will remain the ultimate truth, as the mere disagreement with the Supreme Court is hardly relevant.

What is important in the decision is that, at least in principle, supervision is also a headache for high-level police management. Admittedly, one can predict that in the future it will not be easy for prosecutors to find evidence leading to a criminal conviction in similar high-management cases.

All overall, the recent verdict is significant. As a comparison, it is worth digging a witness statement about a police crime case years ago, which has become a modern classic even at the risk of repetition.

In that case, it was the case that police had copied “underworld contacts” like their grandmothers and dentists from the gangs ’phones from the suspect’s register.

The register has also been called the Putin Registry because the Russian president was found there Vladimir Putin name. The reason was Putin’s connections to the Night Wolves motorcycle gang.

The most significant case, however, was that no one in charge of the register was found in the police at all – not even in court.

Current Chief of Police of the Police Board Tomi Vuori pondered at the time in court as a witness to the liability of the police. The mountain has a background from the Border Guard, which provided a perspective for comparison by the authorities.

“This may sound a bit Kafka-like. I was in a military organization for eight and a half years, and there when it says ‘answer’, then it responds with. At our house [poliisissa] when one says ‘answer’, it is not necessarily what actually happens or is even expected to happen. ”

With the police there are opportunities for citizens to exercise considerable power and strong coercion. That is why Mountain’s statement still stops.

His testimony would also fit equally well as a description of how the police responded to Aarnio’s case. Responsibility disappeared on the horizon and was replaced by a legal squabble over confusing provisions over which, moreover, police officers themselves had been able to make a significant impact.

Read more: Why does the police not understand the provisions they have written themselves?

On Friday, the Helsinki Court of Appeal finally held police officers accountable for the illegalities that helped Jari Aarnio run his drug business. At the same time, the court caught up with the structures that enabled police corruption in Helsinki.

Corona numbers explode in Austria: easing suddenly on the brink