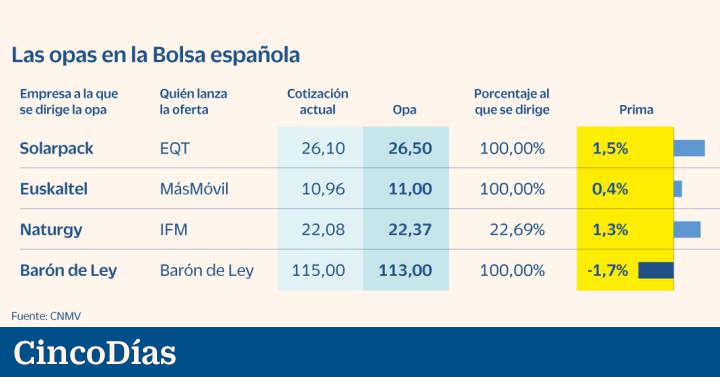 The avidity for the Spanish Stock Market is in style, with the energy and telecommunications sectors in the spotlight. Foreign investors have launched full or partial offers for Naturgy, Euskaltel and Solarpack. Premiums range between 0.4% and 1.5%, but the situation of each of them is different, and so are their risk levels.

The antiopa shield on strategic companies deployed by the Government at the outbreak of the pandemic, back in March of last year, implies that buyers – all those who are not Spanish since November of last year and until next December 31 – need a Safe conduct of the Council of Ministers. Only with this carte blanche can the CNMV approve the offer.

The only offer of the three mentioned that It already has the congratulations of the Executive is that of MásMóvil by Euskaltel. It even has an acceptance deadline, set for July 30, and its success is almost assured, since owners of 52.3% of the capital (Zegona, Corporación Alba and Kutxabank) have agreed to sell. It is conditional on achieving 75%, although this requirement can be removed at any time.

Euskaltel’s is the safest and the least profitable. MásMóvil, controlled by Cinven, KKR and Providence, offers 11 euros, which represents a premium of 0.4% compared to the current price on Wednesday. The other side of the coin is that the settlement will take place in less than a month. The final profitability will depend on the broker’s commissions, to which must be added the tax on financial transactions, of 0.2% on the purchase price.

EQT launched on June 16 an offer for Solarpack at 26.5 euros per share, And although the venture capital manager planned to get rid of the obligation to request authorization from the Executive – it is Swedish, and in principle, the requirement to request permission for strategic purchases in Spain by European investors expired on June 30 -, now will have to wait for the government placet.

With this decisive step to take place, it is logical that the price of the renewable energy producer is still trading at a certain distance from the price offered by EQT, although the experts consulted rule out problems for its approval. The premium is 1.5%. EQT has ensured that companies controlled by the Galíndez family, founder of the company, will sell 51% to it, although, as in the takeover of Euskatel, the effectiveness is conditioned, from the outset, to 75%.

The partial bid on Naturgy involves uncertainty. The Australian pension fund launched it and requested the corresponding authorization in February, so that the deadline for the Council of Ministers to speak ends next month. It offers 22.37 euros per title, which is a 1.3% premium compared to its last price.

The market assumes that the takeover bid will receive the go-ahead, but it is not so clear that it will be without any type of limitations. For example, restrictions may be placed on the sale of regulated businesses. All in all, sources familiar with the operation rule out that a condition of this kind is frightening to the fund that has Jaime Siles as a strong man in Spain.

Once the Executive gives its green light, the CNMV will authorize the prospectus almost automatically, according to the sources consulted. The minimum acceptance is 17% of the capital, an achievable objective, despite the fact that Criteria has been increasing its participation from 24.8% to the current one to 25.7%, after on May 18 it will announce its intention to bring its position closer to 30%, without exceeding this percentage, since it would be obliged to launch a 100% takeover bid.