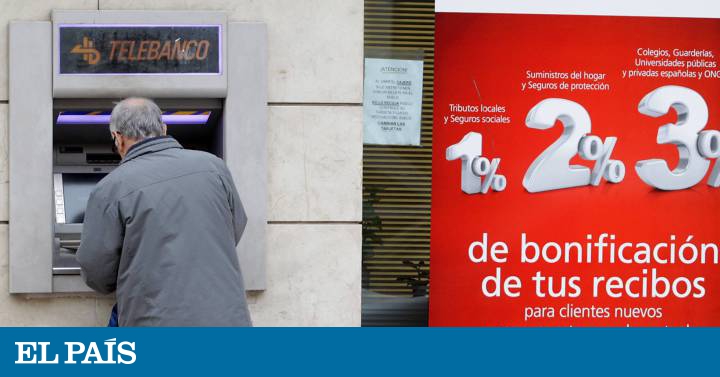 Having a bank account and not paying fees for it is becoming increasingly complicated. For about a year and a half, the Organization of Consumers and Users (OCU) has warned about a general increase in commissions in the main banks. “An account without direct debits of income or expenses, which is not conditioned to an exclusively operative on-line, with a usage profile defined by an average balance of 2,500 euros, associated debit and credit card, and on which a dozen annual transfers of 500 euros each are made, it has average costs that in some cases can reach 240 euros a year ”, says its spokesperson, Ileana Izverniceanu.

In parallel, banks are also tightening the conditions by which the user stops paying commissions for having an account with them. The last to announce changes was BBVA. As of June 15, to benefit from an account without commissions in the entity chaired by Carlos Torres Vila, it will be necessary to have a regular payroll or income of more than 800 euros, or a pension of at least 300 euros. Likewise, in the last four months you must have a minimum of five direct debit charges or an active debit card with movements. It is also required to have some additional product contracted: loans, mortgages, insurance or investment products with a minimum amount of 5,000 euros, or an active credit card and spend at least 200 euros every four months.

With this type of measures, very similar to those that practically all banks have taken, it is intended to discourage the deposit of large amounts of money, so that customers transfer it to products that generate greater profitability for the entity, such as, for example, investment funds. “It’s not necessarily a bad idea,” says Izverniceanu. However, “the horizon for this type of investment is long-term and in the current context, well-diversified portfolios with a greater weight of fixed income should be prioritized,” suggests the spokeswoman. And he adds: “A safer option is to invest the money in a deposit or high-yield account, covered by the Deposit Guarantee Fund up to 100,000 euros per holder and entity.”

If the user rejected these alternatives, there would always be the possibility of switching to an entity whose operations are carried out entirely on the internet. From the OCU they remember that the bank on-line It seldom charges commissions for the checking account and associated services, such as cards and transfers, even when payroll and receipts are not debited. And they have counted up to 12 entities with these characteristics. However, they also emphasize that there are many people, especially the elderly, with serious difficulties in safely operating in a digital environment, which prevents them from having access to this type of entity.

In fact, in order to combine the advantages of the accounts on-line With the maintenance of face-to-face customer service, Nickel, owned by the French BNP Paribas, offers the possibility of opening an account with a debit card and free transfers in the euro zone and withdrawing or depositing cash in 422 lottery and tobacconists distributed by the Spanish territory. Of course, you will have to pay 20 euros per year (that is, an APR of 2% for a balance of 1,000 euros) and some services are paid, such as depositing or withdrawing cash through an associated establishment (50 cents per operation), or the payment of money to the account through a card (2% of the amount entered), among others.

In any case, it sometimes happens that the user considers the collection of commissions by the bank to be improper. For this to be effectively so, the user must find out if the entity did not provide the service for which they were charged or if it is not a real and justified expense, or if they did not request that service, did not accept it, or, in their In this case, it resigned, or if the entity has charged an amount that exceeds the rates it had previously agreed upon, or if it has not been duly informed. From the OCU they advise then to follow some concrete steps to claim.

First of all, we will have to try reach an agreement with the bank to pay back what it has overcharged. “Many times a conversation with the office staff is usually the most effective solution for these improper charges”, Izvereniceanu emphasizes. If this attempt is unsuccessful, the user must file a claim with the entity’s customer service or customer ombudsman.

If the bank does not answer within 15 days for complaints about means of payment or one month for any other, or the user does not agree with the answer, the next step would be to complain to the Bank’s Market Conduct Department from Spain. From the OCU, however, they warn that the regulator’s resolutions are merely informative and their compliance by the entities is voluntary, they are not considered an actionable administrative act and neither do they indicate compensation in the event of financial damage, referring to the courts of law for any claim that requires normative interpretation.

The last option, once the previous steps have been exhausted, is the judicial route. “Unfortunately, at this point, more users arrive than they should, which leads consumers to lengthy and expensive processes,” Izverniceanu laments.