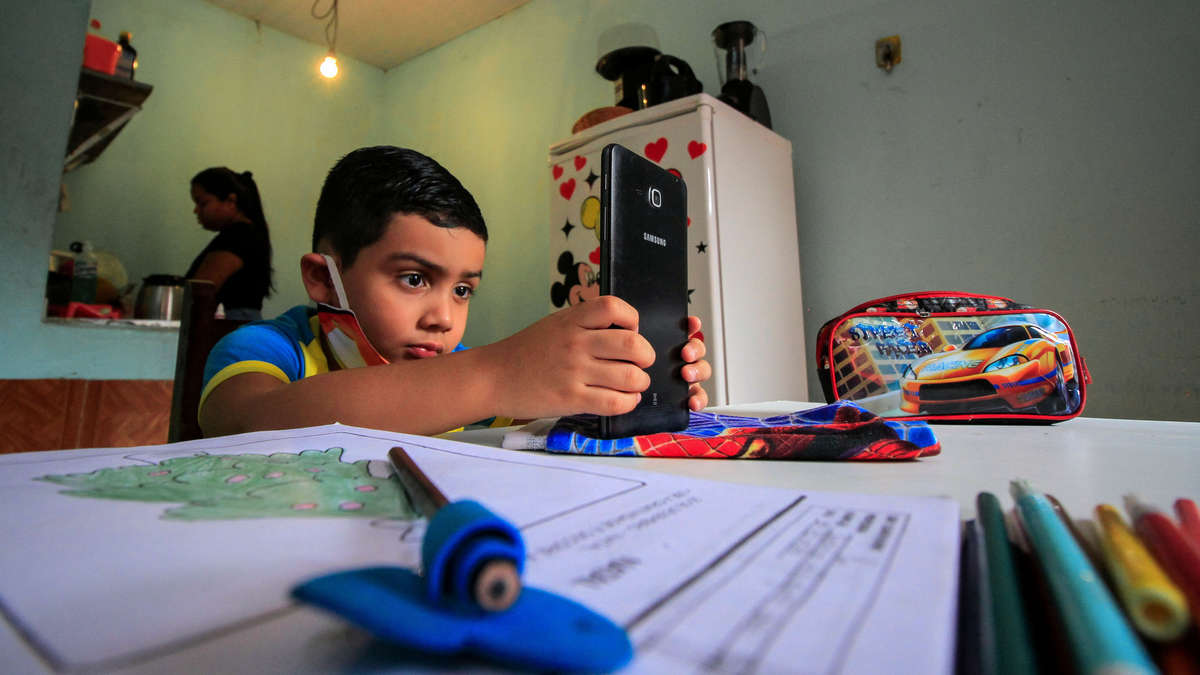 In many parts of Latin America, schools have been closed almost continuously since last year. Many students will probably never return.

Brazil / Latin America – school assignments via WhatsApp, individual worksheets, picked up by parents, or educational television and radio broadcasts – School lessons has been difficult in Germany since the beginning of the pandemic, but the situation in Latin America is fatal. Poverty, poor infrastructure and inequality intensify the consequences, especially for children.

Many students on the Latin American continent have not seen the schools from the inside since last March. Most schools in Latin America have been closed longer than anywhere else. According to a report by the United Nations Children’s Fund UNICEF, Latin American children missed schooling an average of three months more than their peers in the rest of the world, which was average at the end of 2020 already 159 days.

That the schools in Latin America stayed closed for so long and some of them still are, is mainly due to the fact that the continent is becoming a worldwide epicenter of the pandemic had developed: Around 30 percent of the Covid deaths lived on this continent, which makes up just eight percent of the world’s population. Peru, for example, tops the global list with the most corona victims per inhabitant.

Nicaragua was the only country in Latin America to have schools throughout Pandemic* open. While children in Argentina and Paraguay currently study mainly from home, according to the Education Tracker of the United Nations and the American John Hopkins University, there are mixed models in most other Latin American countries. So also in Brazil – Many students are still studying at home, there is distance learning and in some states there is also classroom teaching.

In Rio de Janeiro, for example, schools have gradually reopened since the beginning of the year. At the openings you have too little consideration for the children taken – say critics: While bars, shopping centers and restaurants have been open again for months, schools would have been kept closed for far too long at the children’s expense.

Social: “Homeschooling is almost impossible for many children in Latin America – only two thirds of them even have internet access.”

Corona in Latin America: Closed schools mean no access to education for many students

This criticism is also related to the fact that closed schools For many high school students in Latin America that mean they even no access to education to have. Because the prerequisites for homeschooling are extremely poor, especially in poor households – there is often neither internet nor end devices on which the children can work. Many households have cell phones with Internet access, but no computers that would make longer work easier. The Covid * pandemic is thus widening existing inequalities. While around three quarters of pupils from private schools can take part in distance learning, just half of pupils from public schools have the prerequisites for it.

Many countries have therefore become creative. In Brazil, teaching materials are often sent to the cell phones of students and parents via messenger services. In Peru or Mexico there were more Educational television and radio broadcastsin order to reach children who do not have internet access. Colombia, on the other hand, set up the “Colombia Aprende Móvil” (Colombia learns mobile) project, which gave students and teachers free internet access via smartphones.

Apart from the large educational gap, the lack of schooling in Latin America has other consequences: Many pupils are missing regular meals. In Brazil, for example, it is common for schoolchildren to have two meals at school. This is usually a huge relief, especially for poor families. Since these families are already in a difficult financial situation as a result of the pandemic, they will be hit particularly hard by the school closings.

Latin America: Education was a problem even before Corona

The extent of many problems is only now really becoming apparent, but it was also before the corona pandemic Education in Latin America a problem. Education systems are riddled with inequality. Children from poorer classes have significantly worse chances of graduating from school or even going to university – and more than ten million children in Latin America did not go to school even before Corona.

Most countries in the region have also performed poorly in the past in PISA studies. However, initial indications now indicate that the level of learning of the students could be set back even further. According to a study by the World Bank, the proportion of children who cannot read properly at the end of elementary school rose from 51 to over 60 percent.

Corona in Latin America: School closings could have consequences for an entire generation

For some children and young people, however, the pandemic will not only be a lost school year, but also for them long-term future opportunities rob. The UN estimates that three million children, once they have dropped out of regular classes, do not return to school and so do no school leaving certificate make.

Some of the older children are now helping out their families with jobs, with some of the younger ones the learning gaps will be too big to make up. This is a major setback for the continent. Latin America has had rates of Early school leavers can significantly lower, the pandemic could now destroy these successes again. In the long term, this educational gap could also cause great financial damage: The World Bank calculates that the lack of learning progress will result in a financial loss of around 1.6 billion US dollars in the coming years.

“This is the worst education crisis this region has ever seen,” said Carlos Felipe Jaramillo, World Bank Vice President for Latin America and the Caribbean. “We are concerned that they will be serious and long-lasting Consequences for a whole generation and especially for the weakest sectors ”. The governments must now urgently take the necessary means and also invest in innovation and technology for education systems.

Brazil: The next steps – schools should finally be reopened for face-to-face teaching

Brazil is already investing in programs designed to ensure that as many students as possible graduate despite the pandemic conditions. An early warning system is intended to make teachers aware of which children have a particularly high risk of dropping out of school. There are special courses for older students that are designed to get them to a conclusion as quickly as possible.

In addition, the country now wants to finally reopen the schools: From August, all learners in Brazil should return to normal Face-to-face teaching return – the Brazilian Ministry of Health announced last week. This is a challenge under pandemic conditions – although the majority of teachers in Brazil should already be vaccinated, high hygiene standards cannot be maintained everywhere. Scientists in Brazil are already warning that the uncontrolled opening of schools could lead to a renewed increase in corona cases.

Education in Latin America:
Proportion of the population from selected countries in Latin America and the Caribbean who had completed secondary school in 2018, in percent. Source: UNESCO

Also read: Brazil is experiencing the largest drought in almost a century. This has great economic and social consequences. We could soon feel some of them in Germany.