How the Communist Party is killing religious freedom in China 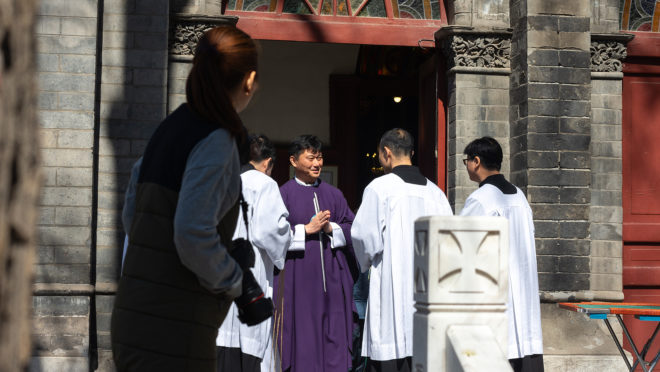 Against a backdrop of pandemic restrictions coupled with allegations of genocide in Xinjiang, the year 2020 saw members of the Chinese Communist Party (CCP) vigorously preparing the population to participate in the party’s centennial celebrations.

To project the image of a unified China, government authorities pressured religious leaders across the country to evangelize about the glories of the CCP’s ideology and way of life. Churches were instructed to display banners with slogans of political ideology, perform the national anthem before singing Christian hymns, and generally demonstrate their loyalty to the CCP above all and only secondarily to the church.

This process is an example of how religious freedom is dying in China, with authorities subordinating inner faith in God to overt public displays of faith in the party. The CCP has issued rules covering all aspects of religious life, from group formation to daily activities involving worship and prayer, all of which must be approved by the communist government.

For example, on February 18, 2020, the Office of Religious Affairs in Shenyang, Liaoning Province, issued a notice to religious groups in the area specifically emphasizing the need to defend Xi Jinping’s policies. On April 14, 2020, the Three Authorities Patriotic Movement, affiliated with Protestants, in Fujian Province responded to pressure by asking that posters promoting fundamental socialist values ​​be installed in all church locations.

Clergy members were instructed to instill these values ​​in the minds of believers through sermons and Sunday services in order to instill a devotion to the principles of the CCP in their daily lives. If the CCP encounters any form of resistance or refusal to help spread government propaganda, local authorities threaten to close the churches.

So great is the fear that, in a press release on October 1, 2020, the anniversary day of the People’s Republic of China, Wang Qingwen, senior pastor in Jinghe New City, Shaanxi Province, called on six Christian churches to join the patriotic teachings of the CCP and to promote the synicization of Christianity.

And they’re not just Christians. This phenomenon of consistent indoctrination and flagrant submission to communist standards is spreading to all religious groups. In Kaifeng, Henan Province, there are about 100 practicing Jews among 1,000 individuals of Jewish descent. As they do not have access to Torah, they often use Christian Bibles, which are also limited and controlled in China. Given the government’s clear position on those who do not conform to the CCP’s rules, they are constantly worried about being banished to forced labor and physical suffering.

On May 29, 2020, the Hainan Buddhist Association went a step further and conducted a training session for Buddhist monks across the province, telling them how to implement religious sinicization, adopt Xi Jinping’s lectures and include the religious regulations of the PCC in their daily lives.

The UFWD stated that the training was done for the synicization of Islam and the promotion of the principles of the CCP, Xi Jinping’s thinking on socialism with Chinese characteristics for a new era, and the political history, culture and legacy of the CCP through the lens of patriotic education.

According to the state-run China National Daily News, in an October 13, 2020 report, the Hubei Provincial Islamic Association even released a draft to implement the five-year plan for Hubei Province through joining the synicization of Islam in China between 2018 and 2022, which included strengthening Xi Jinping’s political identity, spreading his works, emphasizing his regulations on religious matters, and guiding imams to interpret scriptures in accordance with traditional Chinese culture and the core values ​​of the party.

Although this process of expanding the CCP’s reach had been dragging on for over a year, on November 1, 2020, China began its seventh national census. As part of data collection, China has not hesitated to spy on its own citizens and extract unauthorized information. The enumerators were instructed to note religious materials and symbols in each house to verify whether the house was being used as a private religious place or a group meeting place. Residents were advised to stop hosting meetings of any kind.

In addition, China closely follows not only minority religious groups, but also foreign ones. Churches attended by foreigners attract scrutiny through passport verification, registration and prevention so that Chinese citizens do not attend such services.

Hainan province’s public security department offered rewards of up to $15,300 for tips on foreigners who engaged in religious activities without permission. Authorities have even installed surveillance cameras in classrooms to monitor religious teaching. Chinese internet censors remove the words Christ, Jesus, Christianity and the Bible from posts on social media, replacing them with abbreviations. In many cases, Christians themselves substitute these words in the text to avoid online censors.

Chinese authorities also continue to restrict the printing and distribution of the Bible, Koran and other religious texts – basically anything that is not a CCP document. According to Meipian.com, security agencies are tasked with inspecting publishing sites, farmers’ markets and urban-rural junctions to look for illegal religious publications and training courses. Some employers, at the request of local authorities, have gone so far as to dismiss religious minorities, such as Falun Gong practitioners, citing their current or past religious affiliations as the cause of the dismissal.

Sometimes the CCP goes beyond religious restrictions to outright prohibitions. Party members and those belonging to the armed forces must be atheists and are prohibited from following or expressing any religious beliefs or practices. The country’s national law, in effect, prohibits organizations and minors from participating in most religious or educational activities. Cases of death in custody, torture, physical abuse, arrest, detention, sentencing and forced indoctrination into CCP ideology are not uncommon in China.

Furthermore, according to the 2019-2024 synicization campaign, clergy members of all religions have been required to participate in political indoctrination exercises organized by the CCP, and their religious services will be under strict monitoring, with any unfavorable interference or reach of any group being taken very seriously. Thus, in September 2020, the deputy head of the UFWD and the director general of the State Administration for Religious Affairs declared that foreign influence and control had been completely eliminated from Christianity in China.

This type of synicization was already taking place between January and June 2020, when authorities closed religious sites, particularly those belonging to the Islamic, Christian, Buddhist and Taoist religions, under the pretext of restrictions by Covid-19. Likewise, many public displays of religious symbols were also destroyed across China.

Despite these periodic clashes, Chinese efforts to sinicize different religious groups remain steadfast and continue as part of a system-wide effort to make the CCP and its value system ubiquitous in every citizen’s life. Article 5 of the CCP’s new policies emphasizes the adherence of religious organizations to the leadership of the CCP and its constitution, laws, regulations, ordinances, policies, and vision of socialism. These new rules also affirm the need for religious organizations to spread the CCP’s narrative and support its quest for total socialism in keeping with Chinese characteristics.

The Chinese remain free to believe in their private lives what they wish, but they can preach and worship publicly only as the CCP commands. While China’s religious citizens struggle to focus on leading a moral life, after 100 years the CCP’s only goals remain domination, control, self-perpetuation and self-aggrandizement.

* Jianli Yang is founder and president of Citizen Power Initiatives for China and author of “For Us, the Living: A Journey to Shine the Light on Truth” ).