How is Civita di Bagnoregio, the town that dies slowly 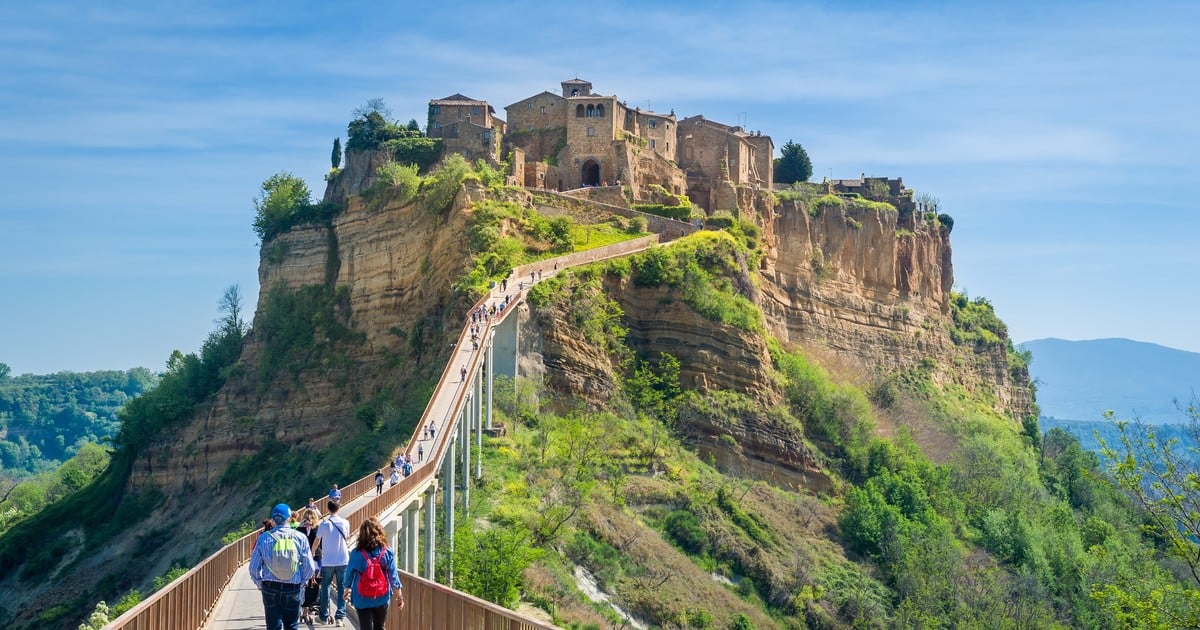 All you have to do is walk across the bridge that leads to Civita di Bagnoregio to meet one of the most charming towns in the Viterbo province, Italy.

Halfway between Rome and Florence, in the Lazio region (Lazio), between hot springs, volcanic lakes and remains of ancient Etruscan and Roman settlements, Civita Bagnoregio is located on a clay hill more than 400 meters high that is in erosion process.

That’s why they say “The city that dies”: the mountain of tuff cannot avoid the passage of time; everyone assumes that it is doomed to disappear.

And that is why every year tourists from all over the world come to visit this place.

The growth in the last 10 years shows how word of mouth and a sustained campaign to promote tourism – including the collection of an entrance ticket to the town that today costs 5 euros – have paid off.

For this reason, some also argue that Civita must now be called “the town that wants to live.” They also know that you have to take care of the destination so that it does not become a theme park.

The main complaints they focus on those tourists who only come in to take some photos, but do not eat or sleep in the place.

That is why for some time they have been working to promote quality tourism to avoid the overcrowding that has caused so much damage in other parts of Italy.

In west-central Italy, Viterbo is one of the least famous provinces in Italy.

In addition to castles, churches and palaces, these lands are home to medieval villas of a leisurely, rural daily rhythm and with many celebrations linked to the harvests and fairs of typical products, such as chestnuts, olives, wines, cheeses and sausages.

They say that Civita di Bagnoregio has a special energy.

To get to this town, of no more than 12 inhabitants -To which we must add a colony of cats- you have to cross a bridge of about 300 meters on foot that separates the place from Bagnoregio, a more populated urban center.

The panoramic views of the Valle dei Calanchi and neighboring towns are unmissable.

Civita di Bagnoregio has a small center with stone constructions, balconies and flower-laden staircases. Although it is small, the place has hotel establishments, bars, restaurants and people always ready to receive tourists.

For this reason, it is essential that, once there, the visitor dedicates himself to enjoying, from a good breakfast, a walk at sunset or a delicious dinner.

A good breakfast to enjoy this incredible town in Italy. Photo Shutterstock

Founded by Etruscans 2,500 years ago On one of the oldest routes in Italy – which linked the Tiber River and Lake Bolsena – after a walk through the town it is possible to find traces of the Middle Ages and the Renaissance in every little street.

A recent geological study defined that the average erosion of the walls is about seven centimeters each year. A slow but continuous wear of the terrain.

Some of the must-see spots are the Puerta de Santa María, the main square with the Romanesque church of San Donato, Renaissance buildings of the Colesanti, Bocca and Alemanni, the chapel of the Virgen del Carcere or the church of Santa Bonaventura.

Balearics could get the green light but mainland Spain will be on amber: reports

Experts to “Al Ittihad”: The visit is a confirmation of joint coordination in facing challenges