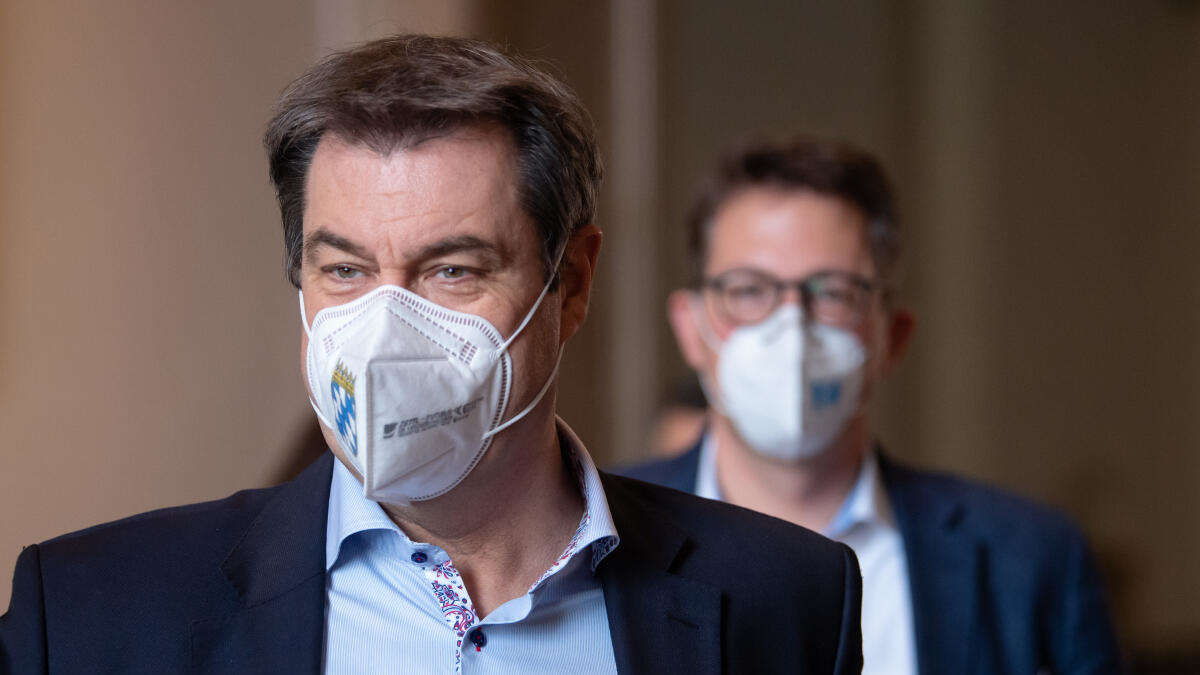 Söder and Laschet are still not in agreement on who will be the Union’s candidate for chancellor. Now the CSU presidium comes together in a hurry, then a press conference is due.

Update from April 19, 2:20 p.m .: At his press conference, Söder thanks for the support he has received. And he asks for your understanding and forgiveness that it will take a little longer before the decision is made. Actually, Laschet and Söder originally wanted to make a decision by Sunday (April 18). But Söder also says: “This week was really important, for everyone involved to listen.” The process is not damage, but gain. He is sure that he will soon come to a good decision “behind which everyone can gather”. He respects this result, there is then no “reinterpretation”, but rather “that is as it is”. But you just had to weigh the arguments first.

Update from April 19, 2:12 p.m .: Söder says that an interim result is now clear, that opinions and a picture of the mood have been obtained. He emphasizes that there was definitely encouragement from the CDU for him.

What Söder wants to make clear with this press conference: The decision must now be made as soon as possible. You have to conclude the discussion together. “Where and how” is decided by the CDU alone, including which body the decision is made. They will “respect” them. Because Söder makes an “offer” with his willingness, the larger sister party has to decide whether this will be accepted or not. Regardless of how it ends in the end: Söder repeats that he will continue to work with the CDU “without a grudge”. As a possible candidate, Armin Laschet, if he should become one, has the “full support and backing of the CSU,” says Söder. And vice versa, he hopes it will be the same. But the time for the decision is there.

Update from April 19, 2:07 p.m .: Söder emphasizes that not a single bad word has been said from the CSU to the CDU. Because this discussion is also about “style and decency, not just about the result”. Because the debates have to take place in such a way that in the end we can “be successful together”. The current situation cannot be compared with previous debates about the candidacy for chancellor.

The CSU boss explains once again what he means by “broad approval” in the CDU for his candidacy: board of directors, parliamentary group and grassroots. He had express respect for all party bodies and was a “supporter and defender of representative democracy”.

Update from April 19, 2 p.m .: Söder begins with a congratulations to Annalena Baerbock. She competes for the Greens in the federal election campaign. “I think I would be very excited to lead this election campaign, but we’re not there yet,” adds Söder. He wants to continue to be the Union’s candidate for chancellor, but the Union’s decision is still pending. In the CSU Presidium they had discussed and it was clear: “The time is ripe for a decision.” At some point everything is said, all arguments exchanged. He had had several “good, friendly conversations with Laschet without any conclusive results”.

Söder has the backing of the CSU presidium and says: “What I said over a week ago, of course, also applies now.” He is ready to take responsibility “if a large majority of the CDU wants and supports it”.

Update from April 19, 1:20 p.m .: CDU boss Armin Laschet has just stepped in front of the press and has written a few sentences about Annalena Baerbock’s candidacy (Green, see update from April 19, 11:16 a.m.) also expressed about his own power struggle for the candidacy for chancellor. He had invited the federal executive committee of the CDU for 6 p.m. to discuss the situation. Laschet will make a “suggestion”, “how we can now clear up the unresolved question between the CDU and the CSU very quickly”. Laschet did not comment on exactly what this proposal looks like.

“I think we have to talk to each other a lot at the moment,” which is why he invited Markus Söder (CSU) to attend the meeting. In return, Laschet is also ready to join the CSU board. With the words “I hope that we will come to the necessary decisions very quickly this week,” he left the field without further response to questions.

In this crime thriller at the Union, the plan now continues at 2 p.m. with a statement from Söder. He does not seem to want to renounce the candidacy either (see update from April 19, 11.55 a.m.).

Söder or Lachet: who will be the Union’s candidate for chancellor? “Procedure situation”

Update from April 19, 11.55 a.m .: CSU boss Markus Söder seems to want to hold on to his application for the Union’s candidacy for chancellor (see first report). And according to the AFP news agency, CDU circles say that boss Armin Laschet is also unwilling to give in. In party circles there is talk of a “lost situation” in which no solution is in sight. Also calf* reports on the duel.

Update from April 19, 11:16 a.m .: The power struggle rages on in the Union (see first report). In the case of the Greens, on the other hand, who are in second place in the polls for the federal election, a decision has now been made: Annalena Baerbock is nominated as candidate for Chancellor. The party held tight, no information leaked out in advance, the chairmen made it up among themselves. Now a party congress in June still has to confirm the candidacy – but this is a matter of form.

First report from April 19, 9:56 a.m .: Munich – Movement on the K question? On this Monday, the CSU presidium comes together in a hurry for a special meeting, I learned the Munich Mercury *. At 1 p.m., the closest party leadership around Markus Söder will be brought together to discuss the solution to the candidacy for chancellor. Söder has meanwhile arrived back in Bavaria from Berlin.

At 2 p.m., Söder and CSU General Secretary Markus Blume want to appear in front of the media. What they announce is completely open. But CSU boss Söder is not expected to make a decision this Monday in the internal power struggle. According to party circles, it does not look like Söder will renounce his candidacy.

Chancellor candidate of the Union: Söder or Laschet? Press conference planned for the afternoon

For more than a week, the Union leaders have been arguing about the candidacy for chancellor. Actually, the plan was to present a solution by Sunday, but nothing came of it. On Monday night, Söder and Armin Laschet discussed in Berlin for around three and a half hours. There were no statements afterwards.

On Monday morning, Laschet * apparently discussed how to proceed with party colleagues in Berlin. According to a dpa photographer, Laschet’s limousines initially stood in front of the Hessian state representation, which he then left at 9.20 a.m. without comment for an unknown destination. Initially, nothing was known with whom Laschet had consulted in the state representation and about the content of the talks. Shortly after Laschet, CDU General Secretary Paul Ziemiak also left the building. When asked by a reporter how things are going now, he only said: “It is always going well.”

Söder or Laschet? Party leaders continue to discuss the candidacy for chancellor – the Junge Union’s preference is clear

Over the weekend, supporters from both camps spoke up again and again. On Sunday evening, however, the news made the rounds that the Junge Union had backed Söder by a large majority, which increased the pressure on Laschet again.

If the two party leaders do not come to an agreement in a timely manner, there is a threat of a vote in the Bundestag parliamentary group on Tuesday, although reports indicate that not only the CDU parliamentary group leader Ralph Brinkhaus thinks little of it. The rifts in the Union might then be openly visible. It is also being discussed whether the district chairmen of the parties should vote on the candidacy. Among other things, the CDU head of Saxony-Anhalt, Sven Schulze, had brought such a vote into the discussion.

The surveys continue to speak in favor of Markus Söder – recognizable, for example, from the numbers in the current ZDF “Politbarometer” from April 16, carried out by the Elections Research Group. When asked who would be suitable as Federal Chancellor, 29 percent of the participants said yes to Armin Laschet (61 percent said no). 63 percent, on the other hand, believed Markus Söder could do this (31 percent said no to him). (cibo / cd / dpa) * Merkur.de and wa.de are offers from IPPEN.MEDIA.

Weather in the Emirates tomorrow, Saturday