How do you avoid emotional eating? 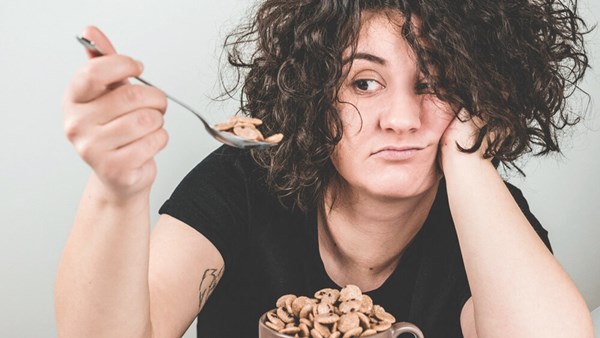 Most people face problems related to eating habits, especially these days… where some claim that their weight gain came due to the lifestyle change that occurred due to the “pandemic”… Is this really true? What is the truth about emotional eating or comfort food, which people eat for emotional rather than physical reasons?
Professor Sofia Osimo, a researcher at the University of Lausanne in Switzerland, conducted – with her colleagues – a study that monitored the impact of the “pandemic” on dietary habits and the phenomenon of emotional eating among people, which was recently published in the scientific journal “Appetite”. ..

What is emotional eating?
The researcher says: Eating is not just a way to quench the feeling of hunger, but is often a way to express feelings. For example, we eat with others out of the need to belong, connect, open doors for interesting discussion, and sometimes in order to vent our feelings.
“Emotional eating” means the tendency to eat food to calm emotions, such as sadness, frustration, and dissatisfaction in existing social relationships.

There are several studies documenting how consumption of sweet or high-calorie foods, such as ice cream, chocolate and cake, is associated with an increase in the release of endorphins, which are mood-enhancing substances. However, scientific evidence indicates that reliance on these foods has a real psychological benefit to those who consume them, and more research is needed to assess the role of individual differences in this matter.

“Pandemic” and weight gain
The researcher adds: To find out the impact of the “pandemic” on emotional eating, we analyzed the data of 365 people in Italy between the ages of 18 and 74, who responded to an online survey conducted during the strict first phase of last year’s closure, and the second phase of the closure, It has more flexible rules… These people answered questions about their family life, their relationship with their colleagues, and how their jobs had changed during this period.

The data indicated that people who showed a high degree of anxiety and depression and who experienced a deterioration in quality of life and social relationships compared to the period before the restriction stage experienced an increase in emotional eating, that is, they reported eating more frequently in response to the negative feelings they experienced. However, high levels of stress were associated with bouts of bulimia: they ate large amounts of food in a relatively short time.

On this matter, Osimo says: The most important thing is to develop self-awareness of our feelings and feelings, because this is useful in life as a whole.. It is a skill that begins to be learned from early childhood.. A young child cries without knowing the reason for his distress.. Only he knows that something is wrong. .. but gradually recognizes the feelings and sensations of the body through emotional interaction with the mother .. However, it is not certain that all people learn while growing up to correctly identify their feelings and feelings .. Therefore, learning this skill is essential. When you realize that a relationship with food reflects a psychological disorder, it is important to contact a therapist. When someone close to us is experiencing this, we need to reach out to them, explain our understanding, and provide support. However, sympathetic or parental support is not enough.. the average person cannot take the place of a doctor in any way.