Horror in Tenerife: everything that is known about the drama of the little sisters that moves Spain 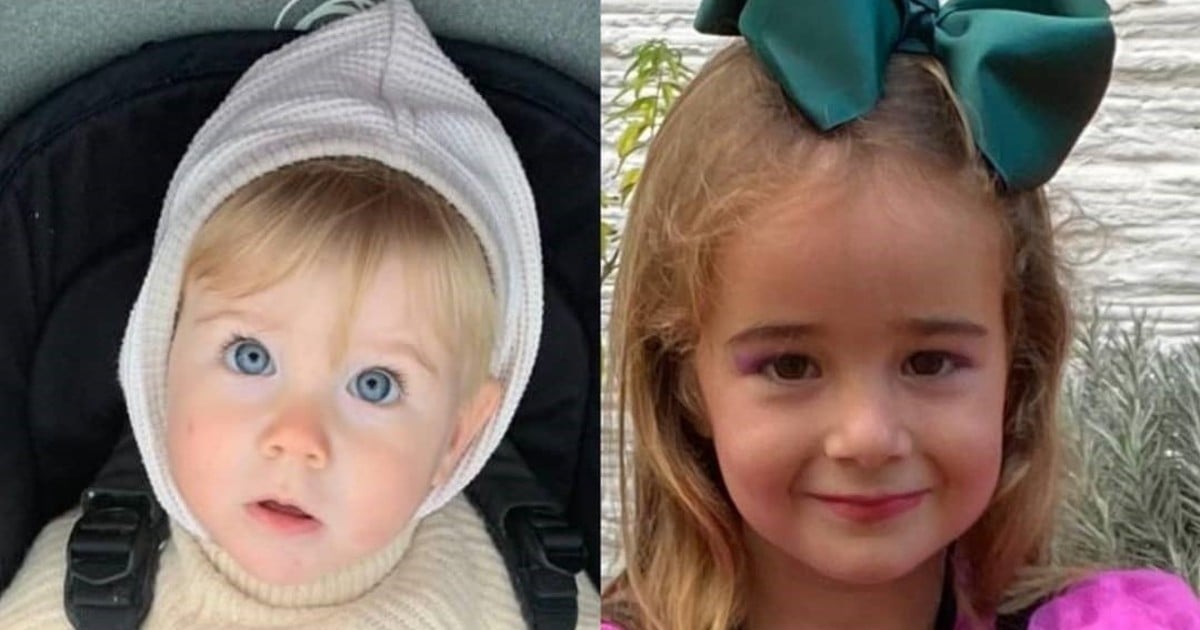 “Don’t worry, I’ll take good care of them,” Tomás told Beatriz, his ex, by cell phone in one of the seven calls she made to him on April 27, after ten o’clock at night, and before Tomás left. to answer his cell phone and disappear with his daughters, Olivia and Anna, in the waters that surround Tenerife, the largest of the Canary Islands.

From that day on which, as they had been, she had to pick up the girls at 21 at the house of her ex-partner in the municipality of Igueste de Candelaria and no one opened it, Beatriz Zimmermann did not see her daughters, aged six and one, again.

On Thursday June 10, 45 days after the disappearance of Tomás Gimeno and the girls, the body of Olivia, the eldest, was detected at the bottom of the sea.

I was locked in a sports bag tied to the anchor of a ship and a thousand meters deep.

Tomás Gimeno has been missing since April 27. They believe he killed his daughters and committed suicide.

The robot from the oceanographic vessel Angeles Alvariño found it three miles from the coast and next to another sports bag just as, in the depths, it was open and empty. Since then, the raking of the area aims to check if it is Anna’s funeral bag.

It is believed that, to punish his wife, Tomás Antonio Gimeno, 37, would have sedated the girls, threw them into the sea and then he would have committed suicide.

“You will not see them again”, sentenced his ex several times over the phone the night he disappeared.

He had picked up little Anna at Beatriz’s house and then had taken Olivia from the camp where the girl spent the afternoons after school. They had not yet scheduled a visiting schedule But that April 27 they had agreed that the little girls would return with their mother at nine o’clock at night.

But when Beatriz arrived at the house with a pool and a slide for Olivia and Anna that Tomás rented, there was no one.

The excuse his ex gave him on the phone was that he had gone out to dinner with his daughters. That allowed him to buy time before Beatriz made the complaint.

According to the reconstruction of his last movements, at half past seven in the afternoon Tomás was loading bags on the boat he has in the Marina Tenerife, where neither the guards nor the security cameras detected the presence of the girls.

Olivia and Anna, in one of their videos that were spread through social networks.

Gimeno came and went, at least three times, laden with bags, between his Audi and his six-meter-long boat. The records indicate that he sailed twice and that, between the first and second departures, the Civil Guard detained him for violate curfew due to the pandemic that was in force at that time and prohibited circulation between 22 and 6 in the morning.

The next day, the boat was found adrift and without anchor in front of the town of Puertito de Güímar, on the east coast of the island and, hours later, the car seat that Anna used in the car floated upside down in the sea.

Beatriz Zimmermann de Zárate and Tomás Gimeno Casañas, spoiled children of wealthy families in Tenerife, had known each other since they were 15. They had fallen in love with the benefits of a friendly life on a beautiful island, between nautical clubs, tennis and golf matches.

However, they lived together, for more than a year, with a conflictive separation that Beatriz would have decided while she was pregnant with Anna and after having said enough to Tomás’s infidelities and narcissism.

The 35-year-old had rejoined a Belgian businessman, 26 older than her.

Beatriz Zimmermann, Anna and Olivia’s mother. Tomás was against his new relationship.

Her new love is called Eric Domb, a 60-year-old man who in August of last year named Beatriz the manager of his company.

“I don’t want that old man to take care of my daughters”Gimeno complained about her ex’s relationship with the Belgian, who had met Beatriz when she bought a piece of land from Tomás to start up his plantation in Tenerife.

Is he alive or did he commit suicide?

The hypothesis of a leak which is supposed to have reached South America because of Gimeno’s work and friendship contacts, fell apart when, a few days ago, a duvet cover and an oxygen bottle were found floating.

In the house of Tomás, who before disappearing would have made transfers between his bank accounts for about 55 thousand euros, the Police found that duvet covers were missing and that there were several blisters of sedative pills open.

The posters with which Olivia and Anna’s family have been looking for them since their disappearance.

However the researchers They do not completely rule out that the girls’ father is alive. There is an international arrest warrant against Gimeno, which ceased to be for child abduction and became for alleged aggravated homicide and against moral integrity.

What Tomás exerted on Beatriz is defined as vicarious violence, which is the damage that the abuser causes to his victim by exerting violence on his own children.

In Spain, the first records of minors who are victims of gender violence are from 2013. Since then, 39 boys were killed by their parents and 309 were victims of sexist violence.

Since Thursday, the Forensic Anatomical Institute of Tenerife has been guarding the body of Beatriz’s eldest daughter, who smiles in those videos that have been overflowing social networks for more than a month and that they move all of Spain.

Olivia was recognized by fingerprints and only this Saturday it was learned that she suffered from acute lung edema.

The director of the Institute of Legal Medicine and Forensic Sciences of Santa Cruz de Tenerife, Jesús Vega, clarified that it remains to be determined whether it was “a death from suffocation, drowning, heart failure or poisoning.”

The discovery of the body was from the ship that belongs to the Spanish Institute of Oceanography and that this Saturday returned to the port due to a breakdown that will have it moored all weekend. He is dedicated to scientific research and, among his skills, is that of make maps up to 3,000 meters deep.

The heartbreaking tragedy of Olivia and Anna left the Canarian island of little more than two thousand square kilometers raw and makes all of Spain cry, where this Friday there were demonstrations against sexist violence.

In Madrid, at ten o’clock in the evening, thousands of women gathered at Puerta del Sol under the slogan “We want them alive” and “Not one less.” “They touch us to one, we all respond”, they shouted.

Chronicle of an agony

As the days went by, all of Spain was getting to know, through the videos that Beatriz keeps on her cell phone, Anna’s pouting, Olivia’s model parade at 3, the games between little sisters in the big bed when she woke up.

Until this Saturday, the Instagram account @bringbackhomeannaandolivia (Bring back home Anna and Olivia, in English) that opened when the girls disappeared had 73 thousand followers.

It began with the portraits, the physical description of the girls and the contact numbers to call if someone saw them. And he was nourished by letters from Beatriz, by tender videos of the little sisters, by pleas to Tomás: “That the father please give up and not make them suffer because they are not to blame for anything and they will be desperately wanting to see me, ”Beatriz wrote on May 7.

The next day videos of Olivia and Anna began to circulate. “Every day is a new opportunity to find them and for someone to recognize them!”

The oceanographic vessel Ángeles Alvariño with which they search for the little sisters. Photo EFE / Ramón de la Rocha

“Give it up now. Free them ”, the residents of Tenerife asked with banners. And even the players of the Club Deportivo Tenerife took to the field with T-shirts from which the girls smile, beautiful.

Fifteen days after the disappearance, 19 million people had seen them playing, dancing, sleeping together.

“Three weeks … I can hardly say words anymore … I also want to disappear … I no longer have the strength … this is torture“Beatriz posted, who even dared to write a” Letter to Tomy. “

“I know you love them more than yourself. I know you would never hurt them, I have always defended that and I have never doubted it, ‘Beatriz told him in her public letter. Ours did not work for various reasons, but that does not mean that we have to do so much damage and I know that you want the best for them. “

“Look at them, you who can… Stroke them. Don’t let them down, ” he asked his ex. They need me Tomy. Comes back. Come back with them. “The president of the Association SOS Disappeared, Joaquín Amills, speaks on behalf of Beatriz.” If I say that it is broken into 1,000 pieces, I fall short, “says Amills, father of a missing son.

“He wants to take away the father’s last name and have them called Zimmermann, which I see positive because the last name of this subject does not deserve to be anywhere,” adds Amills.

Ten days before Olivia was found at the bottom of the ocean, her mother posted a video in which the girl claps while singing, along with her little sister, a song that says: “You are strong… we are strong… yes, yes, yes … ”. As if it were a premonitory message of consolation for her mother, today devastated by the tragedy of not having them again.