Horacio Rodríguez Larreta-María Eugenia Vidal-Elisa Carrió Pact: They have already made a decision, but the flames are growing 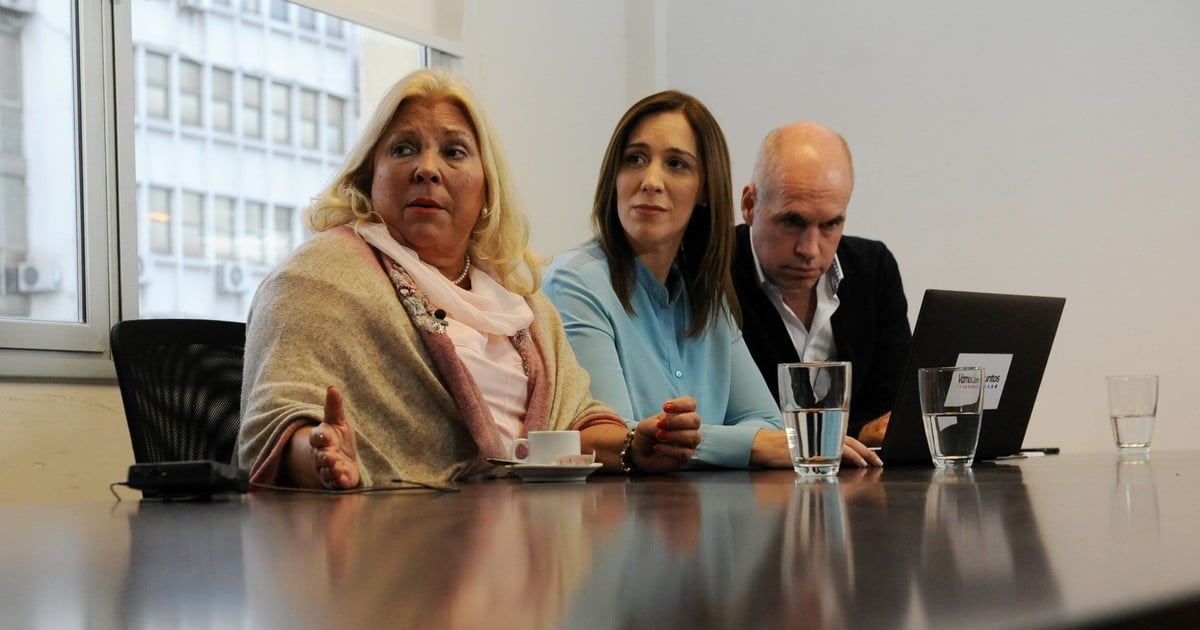 —I tell you something: I am a candidate in the province of Buenos Aires and I will not be second to anyone. We all have to be together, the PRO, the Civic Coalition and the radicals, but If I am going to definitely expose my health, it is to head. I can’t go third or fourth. That’s right: I’ll go first and I’ll do it with everyone, ”Elisa Carrió says from her home and political bunker, in Exaltación de la Cruz, laconic, in front of whoever wants to listen to her.

It is a revelation of high political and electoral impact, which could unleash new storms in a sector of Together for Change. At least part of the statement that the leader of the Civic Coalition makes in front of her interlocutors seems to have been agreed with Horacio Rodríguez Larreta and María Eugenia Vidal in their recent meetings and in their last telephone conversations. Yesterday, before noon, was the last. There is an agreement between them. Carrió will be a candidate and Larreta and Vidal will support that race, although they could question the place on the ballot. They may have another name in mind to lead.

The launch of the former deputy in the country’s main electoral district occurs, among other reasons, to free the path of Vidal, who does not want to be a candidate again in the province that governed until December 2019. Vidal says that Lilita is the one who most protects her.

And Rodríguez Larreta? It protects her, but it is more what pushes her to determine soon what she will do with her future. The head of government has long wanted to see her in the candidate’s suit. He was driving her in Buenos Aires with the idea of ​​setting his own foot before openly confessing his presidential dream. Now he is content with it being in the City. It no longer has to do with her plans to confront Kirchnerism in 2023, but with calming the internal urgencies generated by the threat of Patricia Bullrich of being the first candidate in CABA.

It is an issue that began as a marginal discussion and that, in the heat of the increasingly extreme appearances of the former minister in the streets and on television channels, got out of hand for the Buenos Aires driver. So much so that today his behavior has become ambivalent: If they rush it and guarantee that peace will prevail, he does not rule out ending up supporting Bullrich’s ballot, even if that translates into a loss of internal power. Before that scenario becomes a reality, he and the entire space will do what can never be lacking -except in the PRO- in the prior of an electoral maneuver: a great poll that helps them to think about how the two women are evaluated, who has the best chance of achieving a comfortable victory in the Macrista stronghold and to what extent citizens would change the vote if one or the other were the candidate.

If necessary, and beyond the polls -of which he disbelieves- Bullrich plans to sign up for the PASO to compete against Vidal. In their environment they ensure that in no way will evaluate getting off to integrate the eventual larretista list, unless the mayor ends up blessing his nomination. Today is not the first option, but you have to see what happens if Vidal is the one who gets off in the end. If I competed, A fight of the titans could become inevitable and irresistibly tempting for everyone: Larreta versus Mauricio Macri. The former president plays for his former Minister of Security and haunts the Larretista leadership from time to time.

Macri has been asking his partner for a year to convince Vidal to participate in the Province. Larreta did not know how to unlock the issue. This is what he confessed to Bullrich in his last talk alone, when she asked him for explanations. The woman, as always, accelerated. “What they are doing is not rational”, Told him. There are those who affirm that the words were different. Less cared for, to say the least. The dialogue will continue. They are scheduled to meet again tomorrow.

Vidal hears the requests of the mayor, her political father since 1998 – he met her when she entered the ANSeS as an intern and he was manager – and is preparing to run for national deputy on behalf of the porteños, which would represent a new change of position. district after having occupied the maximum office that can be claimed on the other side of General Paz. For Bullrich and his team it is an unintelligible whim. “It hurts space”He said 48 hours ago.

“Aren’t we going to answer you?”, a larretista operator was concerned. “Not”said Vidal when he found out. I was on my way to the America channel for an interview. He concealed his discomfort from the air. How could she, because – as she herself often says – when something makes her uncomfortable it shows on her face.

Vidal’s application in the City is the second transcendent definition that is falling. He would announce it when he returns from his stay in Washington, which will begin next Wednesday and end a week later with meetings with international organizations. The potential is because she still considers that there is room for not being a candidate. Perhaps he is also waiting for the result of that mega-survey. Or some advice to Larreta from Jaime Durán Barba, the man everyone tries to say is no more, but who from time to time sends suggestions by email from his home in Quito.

It is not very clear if Vidal’s hesitations are because you fear defeat or because you do not want to expose yourself to a fierce intern. The last thing he said, and sent to tell the most anxious – who assure him that not competing will bring costs to society – is that he will have one last talk with his family. That conversation could condition her path: those who speak to her on a daily basis, outside the leadership, ask her to preserve herself for non-legislative electoral contests and to continue enjoying life without being connected to the telephone 24 hours a day.

The Larreta-Vidal-Carrió trio is joined by a fourth actor, unavoidable in the internship of Together for Change: Diego Santilli. Although Carrió wants to lead, it would make a noise for Larreta that his deputy chief has to resign from the City, where he is also Minister of Security, to go as number two. Nor would it be attractive to Santilli, who, if he moved, would do so to be assured that in 2023 he will fight for the succession of Axel Kicillof.

That strategy falls like a projectile in other sectors of space. Jorge Macri, the mayor of Vicente López – who is also excited to be the next governor and formed an alliance with Bullrich – has already warned that he will go to the PASO if the applicant is Santilli. It comes from making strong statements. He even questioned whether Santilli is domiciled in the province. Virulence forced him to send a voice message of two minutes and ten seconds to the rest of the mayors of Together for Change to argue why he had done it.

Jorge Macri has allies who accompany him in his opposition to Santilli’s candidacy. The Peronist Joaquín de la Torre, former minister of Vidal, threatens to leave the space if the Province “remains in the hands of the porteños.” De la Torre flirts with jumping into the ranks of Florencio Randazzo, who at this time analyze when and how to announce that it will be on the grid of candidates for deputies for the Province.

Randazzo has the support of Roberto Lavagna -who has brought several leaders to the campaign team- and Juan Manuel Urtubey from Salta, and could close ranks with Rosario’s socialist Mónica Fein. He also speaks frequently with Emilio Monzó, another who looks forward to the governorship and who works for Larreta, although they have done a pincer job to try to marginalize him.

The twists and turns in the opposition act as a kind of balm in Kirchnerism. At a time of political weakness of the Government, with the presidential image on its popularity floor and with inmates who also climb hand in hand with a pandemic that places the country among the worst records of infections and deaths worldwide, the tugs of his rivals provoke moments of rejoicing at the Casa Rosada and the Instituto Patria.

It is not much nor is it a guarantee of success, but it is what it is.