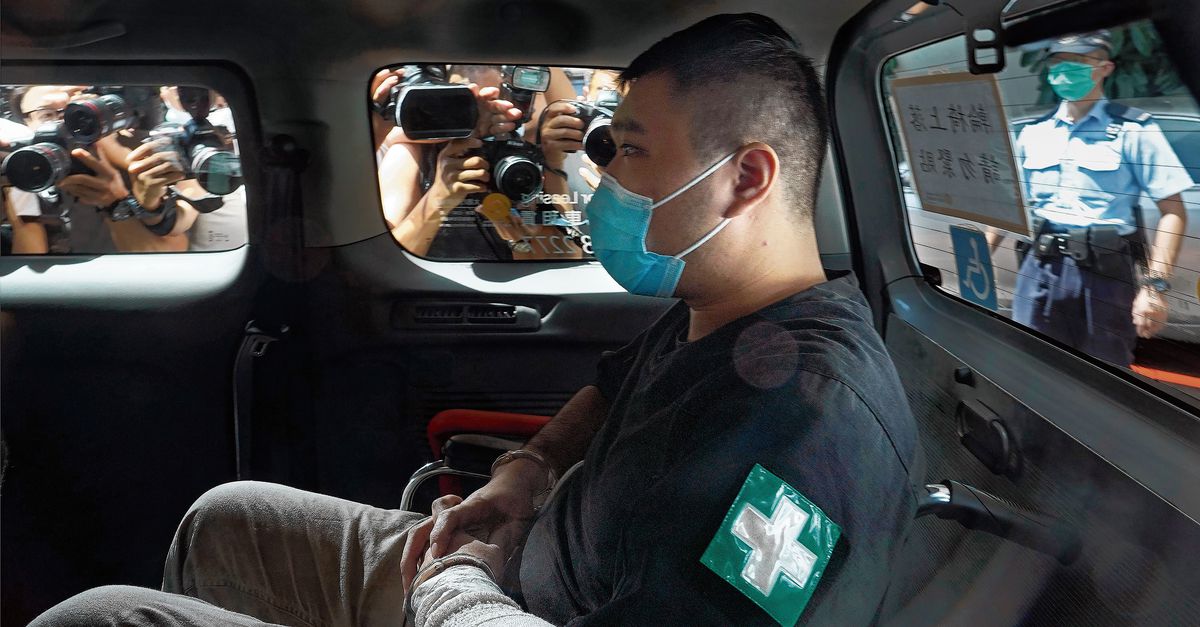 On July 1, 2020, 24-year-old Hongkonger rode Tong Ying kit with his red bike on three cops. On his back he had a black flag tied with the words: “Free Hong Kong, the revolution of our time.” Now this former waiter is going to jail for nine years for that act.

It is the first conviction under a new security law for the former British crown colony, which was handed over to China in 1997. That law, originated by Beijing, had come into effect just 24 hours before Tong’s action. The law prohibits sedition, separatism, collusion with foreign powers and terrorist activities. The maximum penalty for each of those offenses is life.

The judges now find Tong guilty of both inciting secession from China and terrorism. With that text on his black flag, Tong has called for secession in their eyes. Although the words are not very specific in either Chinese or English, the judges saw that the text “had it in it” to be separatist, thereby deliberately inciting Tong to separatism.

This point has been discussed the longest in the courtroom. That’s because a conviction for using a slogan could set a precedent for future free speech lawsuits. Tong’s lawyer stated that simply displaying a slogan does not in itself lead to secession. According to Amnesty International, the judges’ ruling is ‘the beginning of the end of freedom of expression in Hong Kong’.

The lawsuit was unusual in several respects. The three judges were personally selected by Carrie Lam, Hong Kong’s supreme leader. She chose them from a pool of judges created specifically to rule on cases covered by the new national security law. This excludes critical judges, who may not simply be willing to proceed to convictions under this law, from participating in the judicial process.

Like the UK, Hong Kong has a system of jury trials, but in this case the court has deviated from it for the first time in 176 years. Probably because an independent jury would not just go along with a conviction of Tong.

With this verdict and sentence, Hong Kong is opening the door to a whole series of new convictions. At least 128 people have been arrested under the new security law, more than half of them have already been charged. In many cases they are accused of inciting secession by what they have said. This often involves the use of the same slogan: “Free Hong Kong.”

It also means that from now on the people of Hong Kong can be sure that the judges will hand over heavy prison terms if they dare to say such slogans aloud. Nor will they get away with speeches in which they criticize China.

According to Amnesty International, the conviction also “confirms fears that national security law is not just a tool to terrify government critics; it is a weapon that will be used to imprison them.”

Tong’s conviction follows a relentless series of events that are breaking down existing freedoms in Hong Kong at a killer pace. More than a year after the introduction of the National Security Act, there is virtually nothing left of what Hong Kongers have long taken for granted, even after Beijing took sovereignty over the former British colony in 1997.

For example, the government stripped a number of critical parliamentarians from their seats in parliament, to which all pro-democracy MPs also canceled their membership in protest. Later, the pro-democratic members of the district councils also resigned.

Elections scheduled for September 2020, where pro-democracy candidates could have won major victories, were postponed because the government said they could not be held safely in view of the corona pandemic. Pro-democratic forces called this a sham argument.

Hong Kong’s government also killed many critical media. This is how the newspaper closed Apple Daily its doors for good on July 1. The newspaper’s founder, business tycoon Jimmy Lai, had previously disappeared under lock and key. The editor-in-chief was also arrested and agents raided the offices of the editors with great force majeure.

Perhaps the most comical example of the curtailment of freedoms was the recent case in which five Hong Kongers were arrested for publishing a series of children’s books about sheep and wolves. The sheep, who live in Sheep Town, are a model for pro-democratic forces. The wolves are the Beijing-minded groups. The five were arrested because the books portray the sheep as the heroes and the wolves as the bad guys.

On Thursday, the police explained on the basis of the pictures in the book that the makers “glorify illegal behavior” and incite hatred towards the authorities.