Holocaust Day: memories of the trial of Adolf Eichmann, one of the most spectacular in history 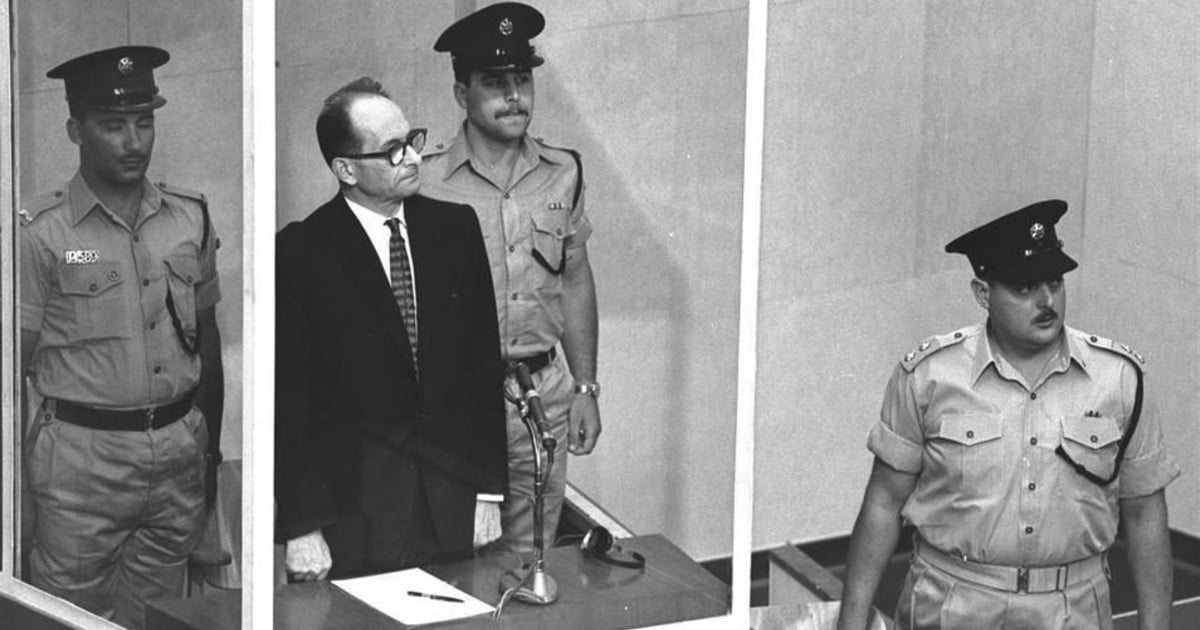 The trial against the German Adolf Eichmann, which began on April 11, 1961 in Jerusalem, was one of the most spectacular in history. What the victims of the Nazi criminal told then still haunts one of the prosecutors in the process, Gabriel Bach.

One of these testimonies, Bach recounts in the kitchen of his Jerusalem apartment, is that of Martin Földi, survivor of the Auschwitz death camp. Földi recounted that his wife and two children were immediately sent to their deaths, Just arrived to field.

The victim said he had quickly lost sight of them. She could only see her two and a half year old little daughter, because she was wearing a red coat. “That red dot, which was getting smaller and smaller: this is how my family disappeared from my life,” declared Földi.

Gabriel Bach holds up a photo showing him during the trial. Photo DPA

The daughter of then-Deputy Chief Prosecutor Bach, Orli, was also two and a half years old at the time of the trial. And he had bought her a red coat shortly before.

Földi’s testimony caused Bach, born in Germany and 94 years old today, to lose his voice at the time. “Suddenly I couldn’t get any sound out.” “It took me several minutes for me to get back to myself,” he says.

The architect of the Holocaust on the bench

The trial of Eichmann, known as the architect of the Holocaust for his role in the systematic extermination of Jews in Europe during the Nazi dictatorship, lasted eight months after its opening on April 11, 1961, and ended with a death warrant.

More than a hundred witnesses were questioned in the “Casa del Pueblo”, a specially equipped theater room. As the accused sat on a glass box, the Jewish victims recounted their horrible experiences.

The judgment is considered as a central element for the recognition of Nazi crimes. “There were many moments when your heart raced,” says Bach in German, who nevertheless admits that no testimony touched him as much on a personal level as Földi’s.

Eichmann, SS Lieutenant Colonel (Schutzstaffel) had deported millions of Jews to German death camps during the Nazi era. After the war, was able to initially flee to Argentina. However, on May 11, 1960, Israeli agents arrested him and kidnapped him to take him to the Jewish state, with the intention of trying him.

Adolf Eichmann in the Israeli prison of Ramle after being captured in Argentina. Photo: EFE

Bach can still vividly remember his first meeting with Eichmann in a prison in the Israeli city of Haifa. He had just read the autobiography of the Auschwitz commander Rudolf Höss, who had been hanged in 1947. In it, Höss had described how sometimes his “knees were shaking” while killing some 1,000 Jewish children a day.

However, according to Höss, Eichmann had told him that it was important to kill Jewish children, in a particular way, to avoid a future generation prone to revenge. “Ten minutes later they told me: ‘Adolf Eichmann wants to talk to you,'” says the former prosecutor.

Eichmann has pleaded not guilty and insisted throughout the trial that he had only acted on the orders of others. However, Bach comments that there was much evidence that Eichmann was a man of convictions that he was even “overdoing” his orders.

Reenactment of the Eichmann trial, at the Museum of Jewish Heritage in New York, in 2017. Photo: Adriana Groisman

“And my job was to prevent something like this from happening in the future,” he adds.

Bach himself was eleven years old when his family fled Germany. Shortly before the Night of Broken Glass (ReichspogromnachtOn November 1938, the family, who had experienced anti-Semitic hostility in Berlin, traveled for the first time to Holland. The old man recalls that, after a stop at the border, a German SS officer brought him up with a kick back to the train.

Gabriel Bach during the trial. In the background, Eichmann. Photo: DPA

Again, shortly before the German invasion of the Netherlands in 1940, the family was able to escape by boat to what was then Palestine. Bach studied law in London and began his career in the Israeli Public Prosecutor’s Office in 1953.

Many of the childhood memories of his German homeland are palpably painful for Bach. However, the recipient of the Order of Merit of the Federal Republic of Germany now views his native country, and especially the younger generation, much more positively.

“When I come today, I see friendship and recognition; you can see a great difference between the environment of before and that of now.” On his last birthday, he details, he received countless congratulations and phone calls from Germany.

The author is a journalist for the agency dpa

Misiones and Corrientes, the two provinces in which coronavirus infections grew more than 3000%