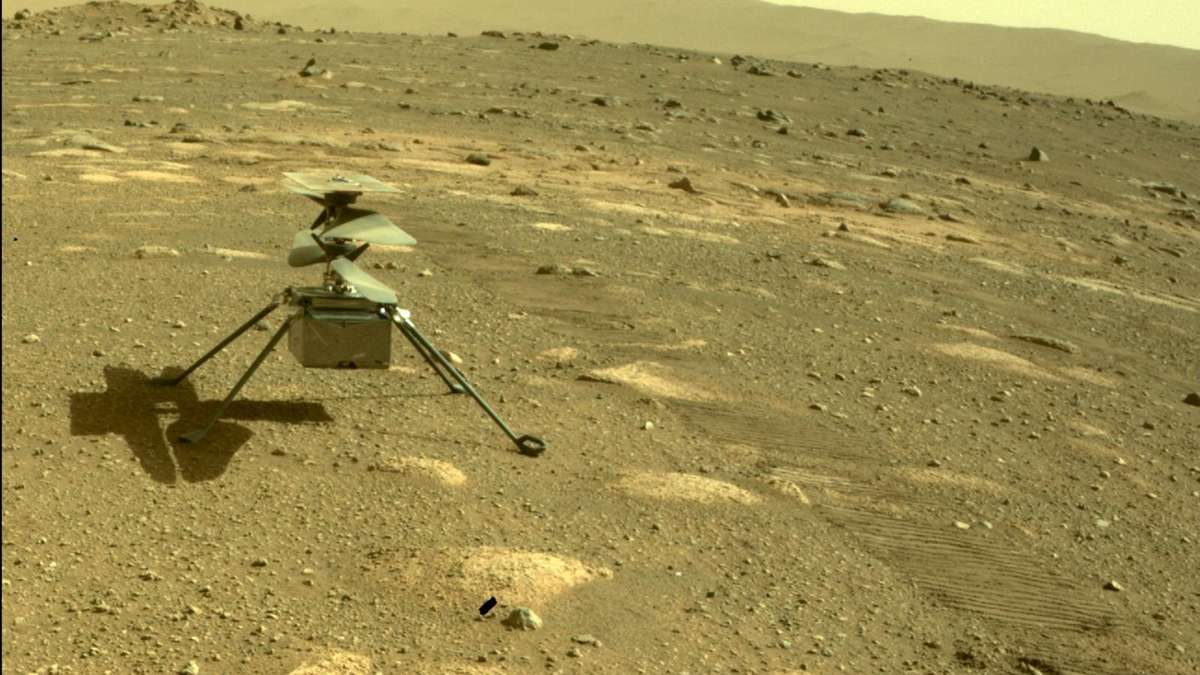 The current Mars mission is intended to represent a step towards manned tours. In doing so, NASA encountered an obstacle. The flight experiment should start on Monday.

Update from April 19, 2021, 9.45 a.m .: It’s supposed to be a historic Mars mission. The first controlled helicopter flight in history over an alien planet was scheduled to take place on Monday, a week late. According to a press release, the helicopter should take off around 9.30 a.m.

However, the flight experiment is risky. Nasa’s “Ingenuity” helicopter is to rise vertically over Mars and hover for ten minutes at a height of around three meters. The flight experiment was originally supposed to take place a week ago, but it was postponed due to indications of possible technical problems (see first report from April 14th).

The device, which weighs 1.8 kilograms, is supposed to take a photo of the Mars rover “Perseverance” with which it landed on Mars in mid-February. The data of the flight should arrive a few hours later on earth, as also emerges from a press release. The experiment is considered extremely difficult. The atmosphere on Mars is only one percent of the air density on Earth. That should make the ascent of the helicopter extremely difficult. On the other hand, the significantly lower gravitational pull on Mars could help.

Munich – It should be a historic Mars mission. But so far it has not had a particularly good star. NASA had to cancel the start of the mini helicopter “Ingenuity”, which is to go down in space history with the first motorized flight over a foreign planet. However, the problem that stood in the way of the tour has now been identified.

As the US space agency stated, an error in the sequence of control commands has been found. Therefore “Ingenuity” could not switch to airplane mode. After several tests, the experts are sure that minor changes and reinstallations of the relevant software are the most stable solution. This would have to ensure a safe transition to flight mode.

Mars mission: Mini helicopter “Ingenuity” arrived on the planet with the rover “Perseverance”

However, since appropriate tests are pending before the next attempt at take-off, a new attempt for the flight over the Red Planet will not be made until the coming week. As a result, the hope of getting started in the next few days has been dashed. But safety comes first, of course.

“Ingenuity” has been on Mars for a few weeks now, arriving as a passenger on the NASA rover “Perseverance” on the second smallest planet in the solar system. The technical problems had already been revealed during the first test, so that the original flight date on April 11th could not be kept.

Nasa speaks of milestones on the mission, some of which have to be overcome before “Ingenuity” can take off. Due to the complications that have arisen and the fact that several days are scheduled for a flight, fewer tours than actually planned will be possible. NASA has estimated a time volume of 30 days for this partial mission.

In principle, it is not unusual for such problems to arise that have to be solved in real time. Because of course shorter missions would involve a higher risk. All in all, “Ingenuity” is intact, power supply, communication and heat control are working.

Mars mission: “Perverance” is supposed to extract oxygen and search for living things

While the responsible team wants to get the mini-helicopter ready for take-off under high pressure, “Perseverance” can take measurements and prepare the first test of the Moxie experiment. Oxygen is to be obtained in the thin Martian atmosphere in order to make manned missions a reality.

The rover, which has already sent a spectacular photo to Earth, is also supposed to look for traces of possible life. If he finds what he is looking for, that would be just as historic as the postponed Mars flight of “Ingenuity”. (mg)

Annuities: buying a nominal service period for the purpose of improving the pension only