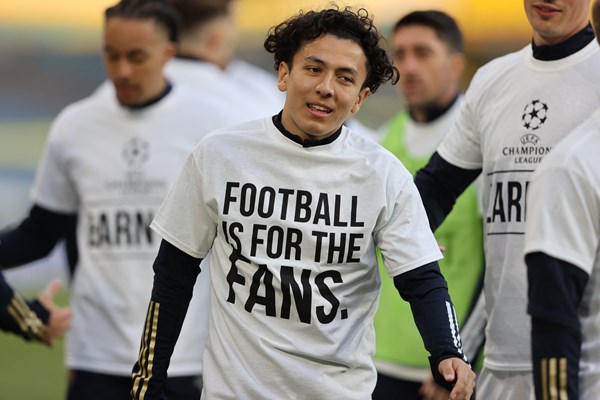 Murad Al-Masry (Dubai)
Most of the clubs opposed to the idea of ​​launching the European Super League came together, and Leeds United protested on his own way against Liverpool, during their match in the English Premier League, which ended in a 1-1 draw.
Leeds United protested against Liverpool’s move to join the European Super League, after he refused to write the name of his competitor and replaced him with the Super League team «Merseyside Reds» in tweets through his official account, and Leeds players during the warm-up wore shirts that wrote on the back: «Football for fans» On the front, the slogan of the Champions League was placed, accompanied by the phrase: “I deserve it.”
Leeds United fans protested outside the stadium walls, and banners were raised calling on Liverpool to respect the game and the football fans, and not to proceed with the decision to join the European Super League, as fans of other clubs joined together on social media platforms, and supported Leeds United during the meeting periods, She expressed her great joy when Leeds scored the equalizer, noting that the fans are currently protesting the 12 clubs ’decision to create the European Super League, and considers that the move would divide football into two classes without taking into account the fighting teams.
Liverpool is the first of the 12 clubs to compete in a match, following the decision to create the European Super League, amid expectations that protests will continue in the coming days, with the rest of the teams playing their matches in the local leagues.

CDU in Baden-Württemberg: You can no longer rely on the majority