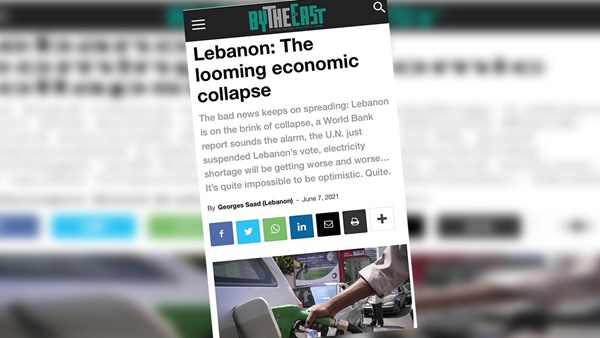 “It seems that there is no light at the end of the tunnel of the Lebanese crisis,” a warning agreed upon by analysts who follow the aggravating predicament currently facing Lebanon, due to the combination of various factors, including the government vacuum, institutional paralysis, deteriorating economic and financial conditions, and the exacerbation of the influence of Hezbollah militias. Terrorism, which for decades has formed a state within a state in Beirut, obstructs all attempts to carry out the necessary reforms at the political and economic levels.
The recent warnings came at a time when various indicators indicated that the collapse in Lebanon is imminent, and that this country is on the brink of an economic abyss in every sense of the word, especially in light of the escalation of social unrest resulting from the crisis, which threatens to deteriorate the security situation further, due to the growing feeling Frustrated in the Lebanese street, about the inability of the state to take control of matters.
And exacerbating the suffering of the Lebanese, their current crises coincided with the continuing outbreak of the “Corona” epidemic in their country, which further hampers the efforts of doctors and nursing teams to contain “Covid 19”, as hospitals are facing a shortage of medical supplies and equipment necessary to deal with the epidemic, which has reached the number of cases. So far, more than 54,000 cases have been infected in Lebanon.
In light of this critical situation, health officials warned that Lebanon is currently facing a critical week in terms of confronting Corona, as hospitals could be forced to stop many of the medical services they provide to people infected with the virus, if the problem of the acute shortage of supplies is not resolved. over the next few days.
In statements published by the “By the East” website, Western analysts said that the current conditions indicate that Lebanon is facing the danger of turning into a failed state, with all the wide-ranging regional and international repercussions that this will entail, even before the outbreak of “Covid 19”. The economic crisis in his lands was present, but now the epidemic has exacerbated it,
The country is facing one of the biggest threats to its stability since the civil war that raged there between 1975 and 1990. The World Bank embodied this very bleak picture through its latest report, in which it said that the current economic collapse in Lebanon is likely to be classified among the worst financial crises that have hit the world since the mid-nineteenth century, especially since expectations indicate the possibility of the economy shrinking in this regard. The country increased by as much as 10% in 2021 alone, with the value of the local currency collapsing by as much as 85%.
Western analysts have warned that there is no clear turning point on the horizon, unless Lebanese politicians and legislators approve the much-needed reforms, which require solving the government crisis, which has stalled since the resignation of Hassan Diab’s government nearly 10 months ago.
Hezbollah and its allies are obstructing Prime Minister-designate Saad Hariri’s efforts to complete the expected government formation, due to the terrorist militia’s fear of losing the increasing political influence it enjoys in light of the current vacuum.
According to analysts who spoke to the Israeli newspaper, The Jerusalem Post, the party constitutes the most profitable Lebanese force from the continuation of the crisis.
His stubborn rejection of attempts to form a government of independent competencies or “technocrats” indicates his concern that Hariri’s return to the political scene would undermine his extensive influence in state institutions, albeit in relative terms.
The emergence of this government appears to be the last chance to stop the accelerating deterioration in Lebanon and the country’s slide into a nightmarish fate. Analysts stressed that Hezbollah’s intransigent positions prove once again the indifference of its leaders to the interests of the Lebanese, who are forced by the crisis to queue in long queues to obtain fuel rations, and suffer daily from increasing power outages, in addition to the escalating rise in the prices of basic commodities and the scarcity of basic goods. pharmaceutical.