Hemedti: The events of El Geneina are an “internal strife” 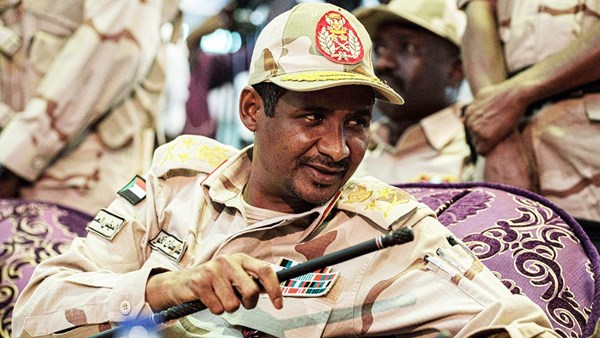 The UN Security Council is holding an emergency meeting today regarding the violence in the Darfur region in Sudan, which has resulted in dozens of deaths and injuries and tens of thousands displaced in bloody confrontations in recent days. A diplomatic source confirmed that the closed meeting is a “European demand” that has the support of the United States, pointing out that it is held at the request of three non-permanent members of the council (Norway, Ireland and Estonia) in addition to three permanent members (Britain, the United States and France).
This came at a time when the vice president of the Sudanese Sovereignty Council, Muhammad Hamdan Dagalo, accused “Hemeti” parties (whom he did not name) of igniting seditions and fires in Sudan, and trying to extend the transitional period to 10 years. And media outlets quoted Hemedti as saying during his address to the Rapid Support Forces in Khartoum, “The events of El Geneina in West Darfur state are an internal strife that has nothing to do with any external party, and the talk about Chadian forces is incorrect.” While the Sudanese authorities announced that the house of the governor of West Darfur state, Muhammad Abdullah Al-Duma, had been subjected to an armed attack.
In another development, the Sudan Tribune website reported that Ethiopian militias penetrated the Doblob area near Al-Alaw in Al-Fashaqa, in the state of Gadaref, which borders the border. Local farmers were quoted as saying that the militias cut off the road to more than 30 farmers and workers in the Kurdish project and fired massively, wounding at least one person, adding that Sudanese forces had been called to the area and that they were still pursuing the attackers and combing the area.
For his part, Ethiopian Foreign Ministry spokesman Dina Mufti said, “It is not possible to link the border crisis with Sudan to the Renaissance Dam file, and we believe that we have dispelled Khartoum’s concerns.” He added in a press conference that what was agreed upon with the head of the Sudanese Sovereignty Council, Lieutenant General Abdel Fattah al-Burhan, is controlling the borders and preventing any movement of anti-peace forces, not entering Ethiopian lands.
On the other hand, Sudan approved its first budget since Washington removed its name from its list of countries sponsoring terrorism, and the budget has given priority to areas torn by violence. The Transitional Sovereignty Council said in a statement, “The joint meeting of the Sovereignty Council and the Ministers approved the budget for the current fiscal year 2021.”
“It is the first budget prepared after the signing of the Sudan Peace Agreement in Juba with the armed movements, and the removal of Sudan from the list of states sponsoring terrorism,” said Minister of Finance and Economic Planning, Heba Ali.

Corona in Egypt: How a 12-year-old goes to school

Eight learnings after a year of reclusive school