Hell in Canada: Why has it reached almost 50 degrees and the wildfires are progressing? 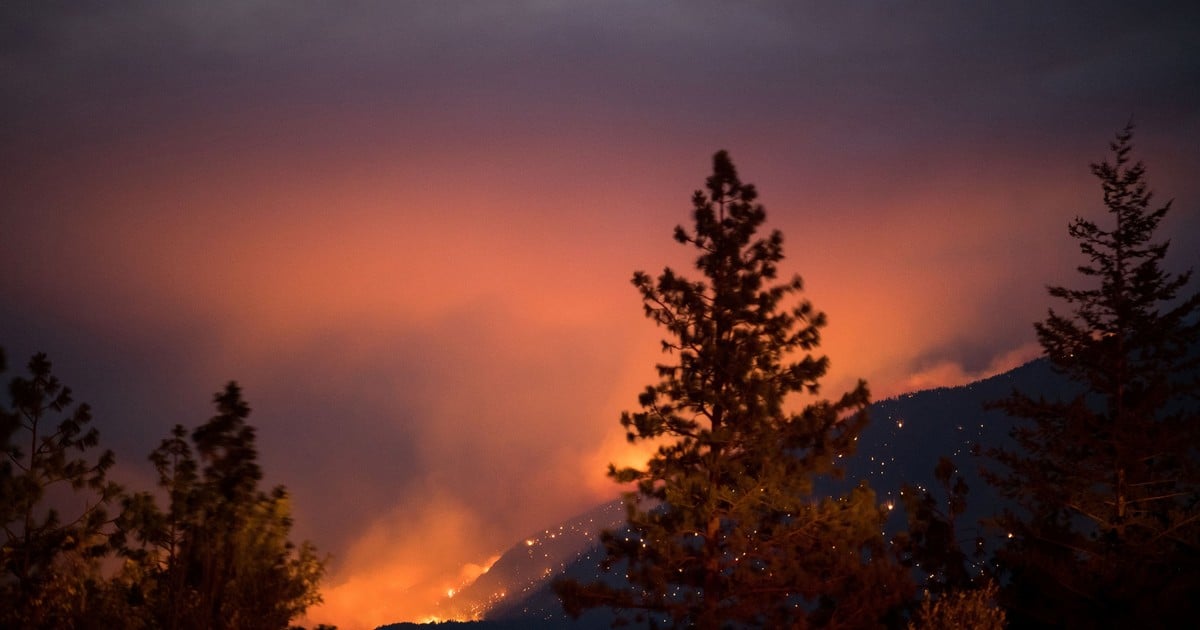 Tens of forest fires stretched out this weekend across western Canada Y California, in the United States, in an area burdened by a heat wave unpublished.

The fire forced thousands of people to evacuate and set off alarms for the devastating effects of climate change.

About a thousand people were evacuated in the Canadian province of British Columbia when a forest fire burned the small town of Lytton, which had been breaking national records for maximum temperatures for three days.

On Tuesday, the inhabitants suffocated with 49.5 degrees, the highest temperature ever recorded in Canada.

According to a map of the provincial government, 152 fires are active. And most (89), started in the last two days.

Prime Minister Justin Trudeau met with several ministers from the Incident Response Group and it was decided to establish an operations center in Edmonton, in the west of the country, to “provide support throughout the region as needed.”

A helicopter prepares to drop water on one of the fire sources near the town of Lytton, in Canada. Photo: BLOOMBERG

“These fires show that we are at the beginning of what promises to be a long and difficult summer,” he added during a press conference.

On Friday, at the end of the day, the forensic services of the province revised upwards the “unprecedented number” of deaths: 719 between last Friday and this Thursday.

This provisional number is “three times greater” than the average number of deaths recorded during this period in normal times.

“The extreme weather conditions that British Columbia experienced in the past week are a major factor contributing to the increase in the number of deaths,” Lisa Lapointe, the province’s chief coroner, said in a statement.

“This is one of the most extreme heat waves we have seen in many years on Earth in terms of deviation from typical conditions in this part of the world, “explains Daniel Swain, a climate expert at the University of California in Los Angeles (UCLA), to explain a phenomenon whose” magnitude and persistence “are” genuinely shocking. “

“It is very rare for absolute temperature records to be broken by more than one degree. In this case, those records were smashed,” he says.

In Oregon, temperatures were higher than the maximum recorded in Las Vegas, in the middle of the Nevada desert. All this in a region with a normally temperate climate at this time of year.

A community center with an air conditioning sign in Vancouver, Canada. Photo: AFP

The phenomenon behind the suffocating heat is called “heat dome”: the hot air is trapped by high pressure fronts, and when it falls pushed towards the ground, it heats up even more.

“It’s like the inflator on a bicycle,” explains Philip Mote, professor of atmospheric science at Oregon State University. “If you compress air in the tire of a bicycle, the air heats up,” he adds.

That condition too prevents clouds from forming, which leads to the ground receiving more radiation from the sun.

Due to the drought and heat, the fire is spreading in the area of ​​British Columbia, in Canada. Photo: BLOOMBERG

In reality, clarifies Karin Bumbaco, a climate expert at the University of Washington, “the pattern was similar to the way we have always had our heat waves. But this was much more intense than usual.”

Evacuation notices were issued for large areas of a California county where a gigantic fire, active for a week, devastated more than 8,000 hectares.

In California, a dozen different bulbs. Last year that state suffered the worst wildfires in its history.

Hundreds of firefighters were trying to contain three forest fires in the north of the state, where the drought favored the expansion of the fire by thousands of hectares, to the vicinity of a popular lake that is preparing to receive vast contingents of tourists on the weekend of 4 July, Independence Day in America.

A couple takes a photo next to a sign that reads 54 degrees Celsius in Death Valley National Park in Furnace Creek, California, United States. Photo: AFP

Lytton’s entire population of about 250 was evacuated Wednesday night, the day after the town set a Canadian record for high temperatures at 49.6 degrees Celsius.

“The last 24 hours have been devastating for Lytton’s neighbors,” Defense Minister Harjit Sajjan wrote on Twitter.

The town, about 250 km northeast of Vancouver, “suffered structural damage and 90% of the town is on fire, including the town center,” said local MP Brad Vis.

Provincial authorities They reported no injuries or deaths related to the fires.

Several outbreaks were recorded north of the city of Kamloops, located about 150 km northeast of Lytton.

Environment Canada said in a bulletin issued Thursday for the Prince George area, another city in British Columbia, that “an exceptionally strong high pressure ridge” it will continue to bring record temperatures for the next few days.

“The duration of this heat wave is concerning as there is little relief overnight,” when elevated temperatures persist, he added.

The heat wave was moving east, toward the Canadian prairies.

In addition to British Columbia, there have been heat alerts for the provinces of Alberta, Saskatchewan, Manitoba, parts of the Northwest Territories, and now Northern Ontario.

In California, weather services forecast higher temperatures for next week.

Also in the United States, the states of Washington and Oregon are suffocated by record temperatures and hundreds of sudden heat-related deaths.

Around the world: the space programs of China, the European Union and the United States